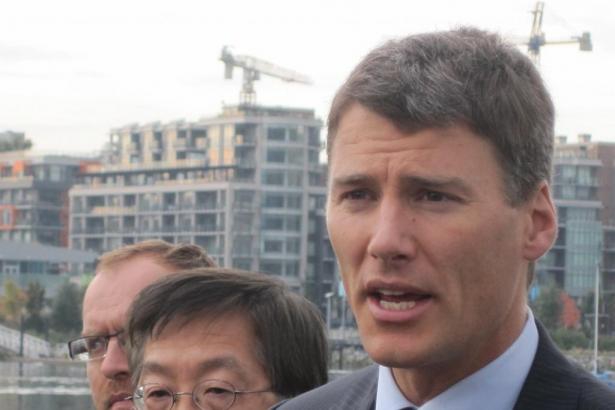 2011 Vancouver Municipal Election: Incumbent mayor Gregor Robertson is heading into the upcoming election with a sizeable lead in the polls. But that doesn’t mean he’s home free. Like his main challenger, the NPA’s Suzanne Anton, Robertson is scrambling to get his message out in the midst of a city crisis over the downtown Occupy Vancouver encampment.

In case you had any questions about the Mayor’s views or policies, here’s a bit of background about his career and his stance on some of this year’s major election issues.

A North Vancouver native, Gregor Robertson grew up on the West Coast before heading off to explore and study abroad. He completed a degree in English and Biology in the United States at Colorado College, where he met his future wife, Amy.

After spending time in BC’s Cariboo region, restoring a sailboat and sailing around the Pacific with his wife, he returned to Canada and started up an organic farm. His venture into agriculture eventually led to the creation of Happy Planet, Robertson’s successful organic juice business. He and his wife now live in Vancouver's Douglas Park and have four children aged 16 to 20.

Robertson first transitioned from business to politics taking a position as an NDP MLA for Vancouver-Fairview in 2005. When the newly-formed Vision Vancouver put together their slate for the 2008 election, Robertson stepped up to helm a takeover from the NPA-dominated council under Mayor Sam Sullivan. Sullivan – failing to secure another NPA nomination after his term as Mayor – had lost a good deal of public support after the 2007 civic strike (often called "Sam's Strike") that lasted almost three months.

Winning over NPA candidate Peter Ladner by almost 19,000 votes, Robertson's campaign appeared to take advantage of the public outcry over secretive practices and the previous council's $100 million Olympic Village loan. Mayor and council shifted from a mixed bag of six NPA representatives, four Vision and one COPE member to a solid Vision majority of eight. An agreement between Vision and COPE meant that two COPE candidates got seats, and Suzanne Anton ended up as the lone NPA member left at City Hall.

When he first ran for mayor, Robertson became somewhat of a media darling, drawing comparisons to other political "hunks" like John F. Kennedy. His good looks are often a topic of humour, particularly among his supporters.

Since his election in 2008, Robertson’s priorities have included branding Vancouver as the “greenest city” in the world and developing transportation and cycling infrastructure, along with the daunting task of eliminating street homelessness by 2015. Now at age 46, the Mayor is entering his most difficult election, attempting to run both a city and a campaign in the thick of a remarkably powerful (and inconvenient) protest.

One of the glaring issues facing candidates in this year’s election campaign has been regarding the ongoing Occupy Vancouver protests in the downtown core. While NPA candidate Suzanne Anton has been very clear in her position since the start of the movement, Robertson has consistently attempted to be diplomatic in his approach.

Having advised an end to the occupation for weeks, Anton brought a motion to council on Tuesday, Nov. 1 that proposed the “peaceful” removal of tents at the Vancouver Art Gallery by a team of city staff including officials in health, engineering, fire and police forces.

“Occupy Vancouver is destroying our reputation,” Anton said in a release last week. “And Gregor Robertson is letting them do it.”