Homelessness in Vancouver: City staff break down the numbers

City staff report that between 2010 and 2011, the overall number of homeless has decreased for the first time since counts began – a  point that’s been echoed by Mayor Gregor Robertson during his election campaign. So how did the City reduce street homelessness? City staff say  the City has worked collaboratively with BC Housing and a number of other partners to adjust social programs in ways that help reach the greatest number of people possible.  “We’ve changed the way shelters deliver services. We’ve not only increased the number of shelter beds, but we’ve also made them more low-barrier,” a staff person intimate with the program explains. 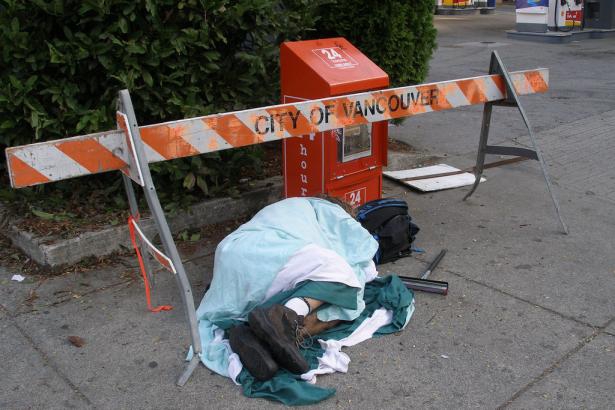 Vancouver municipal election 2011: Election season here in Vancouver is in full swing. And naturally, there’s been a lot of political rhetoric around homelessness as an issue in all of the parties’ campaigns.

On one hand, Vision Vancouver has been optimistically citing the spring report that showed an 82 per cent drop in unsheltered homelessness, leaving only 145 people without homes on the street. On the other hand, the NPA has referenced a newer report, drawing attention to some less impressive statistics – only four of 14 new housing projects are complete, and only about a third of their new tenants were previously homeless.

For those who haven’t followed the issue very closely, these numbers can be confusing. We asked Abi Bond, assistant director of housing policy for the City of Vancouver, to clarify some of the details in order to help voters get a better sense of what’s really going on.

Since 2002, the government has been attempting to track the homeless population across various regions in Metro Vancouver. Every year, they count the number of people found to be homeless on a single night in March.

“There’s no perfect way to count homeless people,” said Bond, recognizing the inherent flaws in this type of study.

“But we try to keep the methodology consistent, so we’re looking for trend information over time. We know that there are probably others who don’t get counted, but it’s a consistent methodology that’s used in various places around the world.”

Bond explained that when the homeless count is conducted, it generally takes two different populations into account: the “unsheltered” people on the streets, and the “sheltered” homeless.

According to the 2011 Homeless Count, there are currently a total of 1,605 homeless people in Vancouver proper. Of that number, only 145 are said to be “unsheltered” while the other 1,460 spend the night in shelters, safe houses, hospitals, jails or recovery facilities.

Those numbers indicate a significant shift from 2008, when only 765 of the city’s homeless people were in shelter facilities and over 800 were unsheltered on the streets. While the total number of homeless – both sheltered and unsheltered – has actually increased over the last three years, a greater proportion has at least been able to sleep with a roof over their heads.

“Even though homelessness grew overall, we reduced the number of people who are living on the street,” said Bond.

NPA mayoral candidate Suzanne Anton has criticized Mayor Gregor Robertson for his failure on this issue, presenting the overall homeless population as an “increasing problem” in Vancouver.

However, Bond noted that between 2010 and 2011, the overall number of homeless has decreased for the first time since counts began – a key point that’s been echoed by Robertson during his election campaign.

So how did they reduce street homelessness? Bond said that the City has worked collaboratively with BC Housing and a number of other partners and operators to adjust social programs in ways that help reach the greatest number of people.

“We’ve changed the way shelters deliver services. We’ve not only increased the number of shelter beds, but we’ve also made them more low-barrier,” she said.