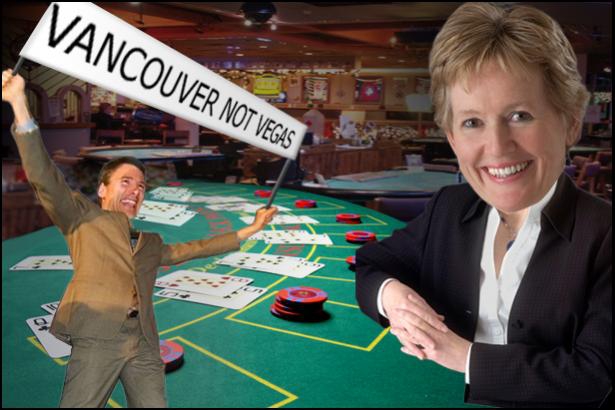 Vancouver municipal election 2011: After an official statement Wednesday announcing Vision Vancouver’s opposition to casino expansions in the downtown core, members of the Non-Partisan Association (NPA) responded to criticism about alleged contradictions on the issue.

Mayoral candidate Suzanne Anton said she has been consistent with her position on expanded gambling, claiming that instead it is Vision’s stance that has been reversed since proposals were brought to council in the spring.

“If there is public support, and if gaming operations can be demonstrated to be safe, then I am willing to consider an expansion,” Anton said.

“That’s what we voted on unanimously at council, and my position on that remains unchanged. You have to have those two preconditions before I would consider any expansion.”

NPA critics have cited Anton’s apparent indecisiveness on the topic. She has been openly in favour of expanded gambling in the past, but there was some confusion after she voted with the majority to oppose the Paragon Gaming and BC Pavilion Corporation (PavCo) proposal in April.

Anton made reference to Vision Vancouver's supposed "flip-flop" on casino proposals, explaining that the motion passed in council included a moratorium with two specific conditions.

“It was very interesting to me that they started off their campaign announcement with a complete change of stance,” said Anton.

She explained that the motion that council unanimously passed included a moratorium on expanded gambling until there was consensus on safety of operations and confirmed public support.

“That’s the motion I voted for at the time, and it was fairly controversial,” Anton said.

For those who have consistently been opposed to the casino project, Anton’s clarified position could signal the NPA’s support for a possible renewed campaign to win over the public.

Lindsay Brown, original co-founder the Vancouver Not Vegas coalition, said she is suprised that any candidate for council or mayor would leave the door open for the expansion of gambling in the city, given the overwhelming public opposition.

"Given the widespread distaste for a downtown mega-casino, it's difficult to see Anton's position except as a response to unseen pressures--perhaps the same kind of pressures that gave this bizarre proposal any currency in the first place," said Brown.

“As a co-founder of the Vancouver Not Vegas Coalition, I am pleased that Vision has finally caught up with me on the issue,” said Bickerton.

“I opposed it then, I oppose it now, and I will oppose it in the future.”

When asked whether or not there was disagreement within the NPA about the issue, Bickerton said he didn’t believe there was.

“I don’t think that there’s a contradiction or disagreement. Our positions were very well stated at the time, and they haven’t changed,” he said.

“I think what Councillor Anton is saying is that she voted as she did against the proposal they brought forward. And I think she’s willing to look at every proposal on its merits, but our position at the time was completely united. We opposed that expansion as it was proposed at the time.”