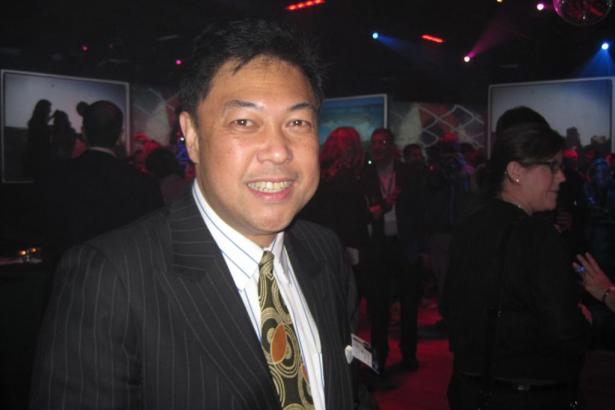 Council candidate Dr. Kerry Jang said the evening was an opportunity to talk about shared values and to learn about different generations' ideas.

It was a loud and spirited crowd representing the blue and green last night at Club 560, as candidates and supporters of Vision Vancouver gathered for the Power the Vision Party.

With the major parties kicking off their campaigns for next month’s municipal election, the event marks the start of a series of upcoming fundraisers and galas. But according to current School Board Chair and candidate Patti Bacchus, this event had a unique purpose.

“This is a gathering tonight targeted at a slightly younger crowd,” she said. “It’s just one of many campaign events to get people out, to let them know about the campaign and hopefully get people involved.”

“I ran in 2008 and I was just overwhelmed with the sort of wave of youthful energy about the party. And it does seem to draw that demographic,” said Bacchus.

Familiar faces from the Vision slate could be seen working the room, including School Trustee Mike Lombardi and Parks Board newcomer Trevor Loke.

For some attendees, this Vision Vancouver event was a first. Young professional Omar Lalani, who works for a small developer and volunteers at non-profit Options for Homes, said he’s usually a COPE supporter but was walking by Club 560 and decided to check it out.

Others like Brian Gunn and Myrna Boulding have deep-rooted reasons for backing the party, having watched Vancouver politics evolve over the years. Gunn currently heads the Wilderness Tourism Association of BC, and Boulding was one of the founders of Strathcona Park Lodge, an outdoor learning centre on Vancouver Island.

“I think the fact that they’re promoting Vancouver and trying to make it into a ‘green’ place is a good idea. It’s in keeping with what we’re trying to do with a lot of our operators in British Columbia,” said Gunn.

Partygoers of all ages hit the bar and munched on hors d’oeuvres, waiting for Mayor Robertson to arrive. Arriving fashionably late just after 7:30 p.m., Robertson pushed through the growing crowd to the stage, an assistant toting his bicycle pannier as she followed close behind.

He spoke to an audience of enthusiastic Vision fans, listing accomplishments from the past three years like the reduction in homeless populations and the Greenest City Action Plan. Upon mention of implementing curbside compost pickup, one supporter piped up with a passionate “Yes!”

“A compost fan – right on. Raise your fist for compost,” Robertson replied, his hand in the air.

He went on to urge people to continue their support so that his party could “keep Vancouver on course” to achieve the goals they’ve set out over the past three years.

“You’ve got to think big picture,” said Robertson. “In this city, in a city that wants to lead, and a city with incredible capacity and incredible talent, incredible depth of culture and commitment, we need to tune that in and focus it on the next three years and continuing to do good work at city hall.”

The Mayor and his team have lots left to do before the polls open on November 19th. They’ll be holding their major fundraiser – a gala at the Westin Bayshore – on November 2, 2011.