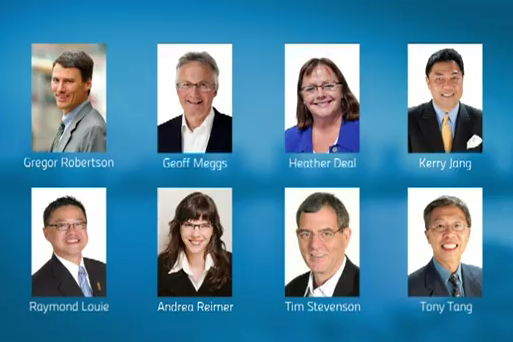 2011 Vancouver Municipal Election: Incumbent Mayor Gregor Robertson and his party, Vision Vancouver, are gearing up for this year’s municipal election. Before you head to the polls, here’s a bit of background on Vision and its objectives.

Former Mayor Larry Campbell – along with councillors Jim Green, Tim Stevenson and Raymond Louie – forged ahead with a new, independent caucus that media at the time referred to as “COPE Light”. Their moderate stance on development and taxes identified them as a centre-left alternative, somewhere between COPE and the more conservative Non-Partisan Association (NPA).

They first ran for office as Vision Vancouver in the 2005 election, with Jim Green taking the lead. Four of their candidates were elected to City Council, but Green was defeated by the NPA’s Sam Sullivan.

In the 2008 election, “green” businessman Gregor Robertson ran as the party’s mayoral candidate against the new NPA leader, Peter Ladner. Vision Vancouver negotiated a coalition with members of COPE and the Green Party, and won the election with the cooperation and support of both parties.

Gregor Robertson – the “Juice Man” – has been turning heads in Vancouver for years, as both an entrepreneur and poltician. After travelling the world and trying his hand at farming, he founded and developed a well-known local brand, Happy Planet Foods. His success in the organic juice business, combined with his proclaimed dedication to social responsibility and sustainable practices made him the perfect face for a fresh, new political party attempting to bridge the gap between the existing (and very divided) alternatives.

After a stint as an NDP MLA for Vancouver-Fairview, he joined the growing Vision team in 2008 to run for mayor. He has been a very vocal advocate for “greener” strategies, striving to “make Vancouver a more livable, environmentally friendly city”. His original platform also included the ambitious goal of ending homelessness by 2015. Polls in the past year have placed Mayor Robertson’s approval rating above 40 per cent, despite recent events like the Stanley Cup riots, seen by some as a stain on a relatively clean record.

Referred to as Gregor Robertson’s “right hand man”, one could say Mike Magee is a truly vital organ when it comes to the Vision body. The mayor’s cool-headed chief of staff is a talented connector, said to be the one who really brings platform promises to fruition.

Apart from his responsibilities at City Hall, Magee also provides consulting services for a variety of social enterprises and non-governmental organizations – a pursuit that has given him access to a wide range of valuable contacts including international bigwigs like Sir Richard Branson. Magee's social and environmental conscience has proven to be a good fit with the Vision team, with his corresponding values and a necessary ability to follow through.

Marcella Munro is another name that’s been floating around this election. She’s no stranger to the Vancouver election scene, taking on Vision’s communications strategy for a second time and no doubt hoping for a repeat of their victory in 2008. Munro’s history as a CBC reporter gives her unique insights into the world of press relations, insights she claims are essential in “creating narratives” and putting out effective messages.

Another point of interest in Vision’s campaign this year is the visible diversity on the slate. A handful of women appear on the list of candidates – for council, parks and school board – as well as others representing Asian, Black and LGBTQ communities.