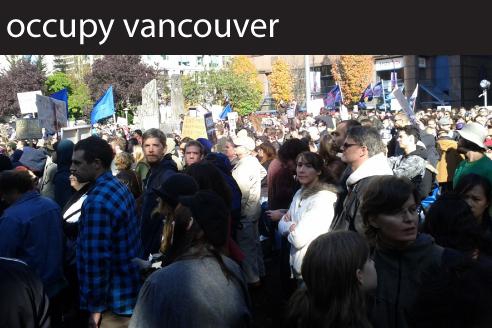 I attended the Occupy Vancouver rally at the Vancouver Art Gallery on Saturday, October 15th 2011 to see what it was like. I’ve been following the Occupy events very closely on the news ever since it started in New York on September 17th. I find it very interesting as it’s one of the first large protests that has been organized mostly through decentralized channels online, and through word of mouth in North America.

I’ve also watched closely the different views and opinions that have been put forward at the New York occupation. Discussions of income inequality and corporate greed seemed to be the most pressing issues there. As a politician I don’t think it’s my role to be defining this movement. I actually think that any politician who openly endorses this movement lacks the understanding that people are upset with our current political system and its actors. When politicians endorse the Occupy protests this early on it looks like an attempt to co-opt a movement that isn’t looking to be defined or guided by the current system. In New York, it seems that people are frustrated with the debilitating polarization and inefficiency of the Democrats and Republicans management of their economic affairs.

I spoke to several people at this event about why they were there and what they would like to see a future City Councillor like myself do differently. Just being open and accessible was actually one of their biggest requests and they thanked me for attending this event and putting myself out there. The Occupy Vancouver event was very peaceful and had an air of a folk festival with a group of three people playing full drum sets for an excited crowd. This was in stark contrast to the violence that broke out in the Occupy Rome protests where cars were lit on fire and windows were smashed by instigators.

As a renter I certainly belong to the 99% of people that are not among the top 1% of income earners in North America. I empathize with the frustrations of the protesters that were at the Art Gallery that day. I think the most viable solution to increase our equality of opportunity isn’t to create a new organizational structure to replace the existing political system, but to get involved in our current system as an agent of positive change and to promote others to do the same.

I find the Occupy Vancouver protest interesting as they are already struggling to accommodate the many different personalities and agendas that are present there. In order to better organize their discussions they have formed a “general assembly” to structure and channel these different views, but it appears to be very close to the democratic structures we already have in place. I can understand how these disparate people have come together through a mutual feeling of being excluded and underrepresented in our current political system. Now that these people have come together they will need to discuss and create solutions to make long term change.

Not many people can afford to take time off work to become a full-time protestor at these Occupy rallies and our unemployment isn’t low enough in Canada to provide a critical mass of people to maintain an effective long-term occupation. That means this movement’s window of opportunity to exact change in Canada is narrowing by the day. Local residents and businesses slighted by the loss of their public space and access to roads might feel at odds with the Occupy movement as time goes on.

Like many direct action movements it will be difficult to maintain the buy-in of the public at large if it begins to negatively affect their way of life. Rather than recreating the very democratic systems that have evolved to manage our political affairs it might be of more use if these justly upset individuals engaged our legislatures and took to running for office. Or maybe not… again this isn’t really my movement to define or shape, but I do enjoy having a discussion on the impact it will have on our communities and our world.

One thing is clear; we need to work together with open minds and with people from all parts of the political spectrum to bring about positive change.

- Jason Lamarche is an NPA City Council candidate. More info can be found on his website: ELECTJASON.ca