Vancouver-based Board of Change holds a downtown event in support of Vision’s candidate. “The NPA has a policy to take the city back, and Mayor Robertson’s policy is to take the city forward,” Director Len Laycock says. 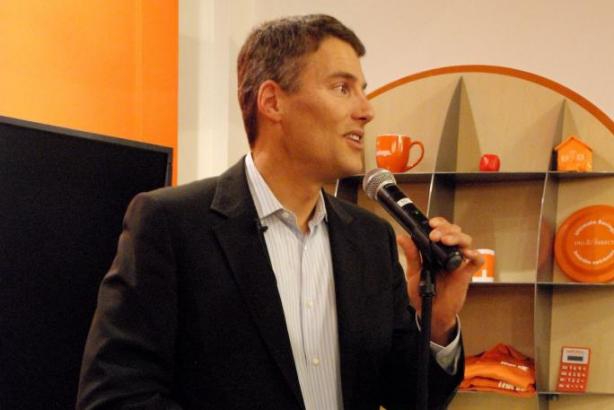 At the back next to the veggie platter.

Business casual. Got it.

Environmental capitalism? This must be a Gregor Robertson function.

“This is a networking event for green capitalists,” explained Alex Tonin, a tall and enthusiastic volunteer working the door.

“We believe that environmentalism and capitalism are goals that can be achieved together.”

Tonin was one of several youthful greeters tasked with registering attendee’s and getting people’s name tags right. These "green capitalists" as they call themselves, solar power, electric car and organic grocer types, invited Robertson to speak at this, one of their monthly networking events, last night.

Over one hundred members of Vancouver’s Board of Change, a not-for-profit group of sustainability entrepreneurs, crammed into the ING Direct Café at the corner of Howe and Pender for the occasion.

Making his way through a steady exchange of business cards, inspired green ideas and hugs, Robertson took the stage for twenty minutes before fielding a half hour of questions from the floor. In his speech, geared towards the social and environmental business crowd, Robertson talked about the benefits of the green economy and the importance of providing opportunities for green entrepreneurs.

“You can only do so much change in three years without turning it all upside down, but despite what my detractors say, we are not upside down,” he said to open.

“We stand in stark contrast, whether it is economically or in quality of life, to most other cities in the world. Vancouver is doing well and thriving, and I think we have a new spring in our stride. We have a newfound confidence and presence on the global stage as a city and a lot of that has come from the way we have embraced change over the last three years.”

Robertson paid special attention to Vision’s record on homeless, highlighting his emergency shelter program saying that the most recent Vancouver homeless count was down from 811 when he took office, to 145 at last measure. He also said that high cost of living and increased costs of being ‘green’ were serious threats to the momentum of sustainability in the city, and that if re-elected, Vision would make affordability a top priority.

“If we end up being the greenest resort city, then we have failed.”

Guests asked the mayor about oil tankers, salmon rivers, cyclist training, arts funding and building upgrades, but what everyone really wanted to know was what the next step of his green plan is going to be. And while the 100-plus crowd praised Vision for creating a civic culture where bold environmental dialogue can take place, guests like J.M. Toriel of Big Green Island Transportation said they wanted to hear what concrete plans Robertson has to help green business’s like his flourish.

“In the case of electric vehicle adoption, I think a lot more can be done,” Toriel told the Vancouver Observer.

Toriel runs an electric car consulting firm focusing on connecting buyers with the services necessary to get their progressive electro-rims on the road. He has been struggling to meet his customer demands he says because of problems with permits and gridlock at BC Hydro. He is looking to City Hall for help.

“If you look across the border, even to Washington State there is a tremendous amount of activity across the US with the adoption of electric vehicles and we have fallen behind. And if we are going to embrace the Greenest City Initiative I think we need to look at more than just bikes,” he said.

“We have been struggling to keep up with the pace of change,” Robertson told Toriel and the crowd during the question and answer exchange. He said that all new home construction in Vancouver now has to have outlets for electric cars and that 20% of parking spaces in new condominium buildings must also have electric car capacity.

For the most part, the evening was a Vision only affair, although Green Party council hopeful Adriane Carr, (who is also the deputy leader of the Green Party of Canada) made an appearance. Carr put a question to the mayor about what he was doing about oil tankers on Vancouver’s shores, as the Federal government gears up to expand Vancouver’s crude transportation capacity.

“We have real concerns about that. It [oil transport] is a tiny portion of the business going on in the port and if something goes wrong it puts everyone at risk,” Robertson said.

“At this point there is a National Energy Board decision that is basically happening behind the scenes that we have not had a voice in and that is a real concern to Vancouver and all the communities here in the south coast.”

“Some of the goals are certainly in line with where I and the Green Party want to see the city heading, the greenest city, the most livable city, an affordable city, these are all important goals,” Carr told the Vancouver Observer afterwards.

“I think some of the execution of those goals leaves something to be desired and electing Greens would make a positive difference.”

Carr would be the first ever Green elected to Vancouver City Council if she passes the gate in November. Former Green Party member, Andrea Reimer, switched camps to Vision after her failed 2005 attempt at City Hall and was elected as a Vision candidate in 2008.