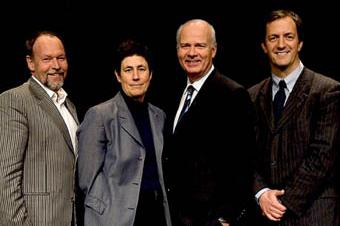 At Issue panel on CBC’s The National

Canadian political scandals surely lack the sordidness of their American counterparts. (Our politicians tend not to tap dance in airport men’s rooms, or use taxpayer money to woo mistresses in Argentina.) But At Issue, the political panel on CBC’s The National, was able to find enough grist for their annual Best and Worst Picks of the parliamentary season.

As for the Most Shamelessly Exploited Issue, Gregg picked Harper wanting to change the sexist lyrics of O Canada to appease female voters, Hébert nominated the renewed abortion debate, while Coyne chose the Liberals’ flip-flop on the firing of disgraced MP (and Charlottetown-hater) Helena Guergis.

The top award of the night, for the Worst PR Disaster of the political season, was hotly debated by the panellists. Coyne went with MPs refusing to have their expenses audited, Gregg picked prorogation, and Hébert went with the $57,000 “Fake Lake” built for the upcoming G8/G20 summits.

An encore presentation of the At Issue wrap panel airs June 12 at 3:30 and 8:30 p.m. PST on CBC News Network, and is available at http://www.cbc.ca/thenational/