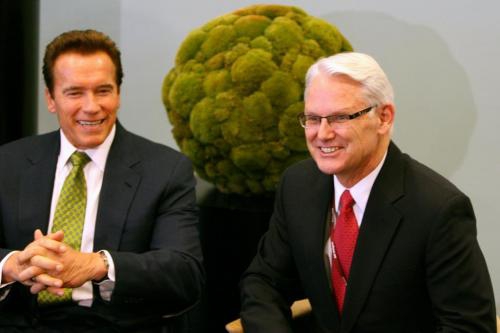 B.C Premier Gordon Campbell has been busy in Copenhagen this week, speaking about B.C’s Carbon Tax and meeting with provincial premiers and US governors. He’s been photographed with Arnold Schwarzenegger and TV celebrity Mike Holmes.

But critics on the ground in Copenhagen say Campbell is not doing enough to raise Canada’s profile at the Climate Change Talks. “He’s been really quiet and reluctant to criticize Stephen Harper and his position,” says Victoria-Swan Lake MLA Rob Fleming.

In Copenhagen with the Blue Green Canada delegation, Fleming says B.C is at risk from Canada’s lacklustre participation at the United Nations Climate Change Summit. “Our resources sector and some of the goods we export could be zeroed in on by the EU as receiving unfair advantages from being a renegade on climate change and carbon pricing mechanism,” he said.

Campbell has recently distanced himself from Ottawa’s positions, telling The Vancouver Sun, "one of the lessons from Kyoto is you don't get very far in Canada if you don't include the provinces. The Kyoto Protocol was done without any provincial input, there was no discussion about it."