Amongst their ranks were midwives, doulas, midwifery students, concerned parents and more than fifty children birthed by midwives. The stroller-march was organized by the Midwives Association of British Columbia (MABC), and occurred at the same time as a march in Victoria, which MABC estimates was attended by a hundred people.

Allyson Campbell, a registered midwife and graduate of the four-year UBC program, said, “the program has been under-funded from the very beginning.” The program receives $661,000 in provincial funds yearly, which Campbell says only covers half of the program’s optimal operation costs. Campbell added that midwives are currently attending about ten percent of the births in BC, noting that rural areas of the province are particularly under-served.

The UBC Midwifery Education website currently warns that while it is taking applications for 2010, new student intake is not confirmed.

In Victoria, members of the group attended the Question period in the House, where New Westminster MP Dawn Black raised the question of expanding funding for the UBC program to Moira Stilwel, the Minister of Advanced Education. While Stilwel and the province continue their review, for Vancouver stroller-marcher Holly Broadlund there is no question of the importance of midwives in BC.

“The pre-natal care was amazing: forty-five minute appointments, and it was my first baby, so I had so many questions. After the birth, when things got complicated, the midwives were there for us. They were doing home visits, helping my family when I wasn’t home. I just loved them. I had to come when I heard about this.” Broadlund’s two-year-old daughter ran amongst the midwives who birthed her, clearly happy to be there as well.

-Summary in Chinese by Hsu Mei-lang 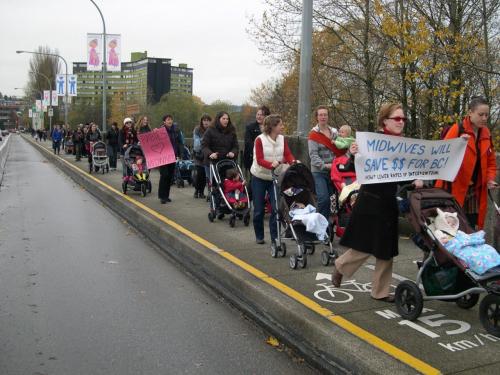