A conflict photographer, Thomas Smith, is back home in Brooklyn, New York, after being assigned to Iraq. Having just returned from the battlefield, he faces a new challenge: he has 72 hours to vacate his home which will be demolished to make way to new and more sophisticated buildings and high-rises. The situation raises a number of questions, comparing life at home to the life of suffering and death in countries torn apart by wars.

This is just the beginning of the Vancouver-based Boca del Lupo's "Photog: An Imaginary look at the Uncompromising Life of Thomas Smith", part of PuSh International  Performing Arts Festival. It's a compelling one-man show that examines the lives of conflict journalists and photographers, their struggle working in hazardous foreign environments and the paradoxes and emotions that are drawn from these experiences.

Photog's director Sherry J. Yoon and writer/ performer Jay Dodge started to work on the concept in 2008, aimed to approach the theme of conflict and explore photographers’ war experiences.

“That was the general idea but when we started we weren't quite sure what we were going to find,” Yoon said.

She got a journalist friend, who had worked with conflict photojournalists Tim Hetherington, Michael Kamber, Ashley Gilbertson and Farah Nosh, on board to interview these professionals.

“I wanted to ask deeper questions, but also maintain the professionalism and respect,” she explained, adding that establishing trust was the key factor.

It helped that the journalists she spoke with had a keen interest in her project.

“I think it was a crucial element to get revealing interviews, generous interviews. They gave us access to many, many, many of their photographs, thousands of them ... We had a lot of access to their material because they trusted us (and) the perspective that we were approaching the piece with,” Yoon continued.

Yoon and Dodge travelled to New York to conduct the interviews, where all the conflict photojournalists were based. They worked for media outlets such as Vanity Fair, Time Magazine, The New York Times and the The Virginia Quarterly. "At the time we interviewed them, they were active photographers working in their field," Yoon said.

The development took two years and debuted in Toronto in 2010. The story was based on the verbatim text from six-hour long interviews and thousands of photos that depicted true conflict with its own narrative, an "integral part of the story”.

Physical theatre, film, animation and rigging are other technical and artistic elements that play an important role on telling the story.

Yoon admits that the material that Boca del Lupo presents can be “very hard to watch”. They are a reminder of the dangers that conflict journalists go through every day while on their job in a hostile and dangerous environment. This reality was tangible when British photojournalist Tim Hetherington—one of Photog collaborators—was killed in 2011 while covering the civil war in Libya. Yoon described him with fondness as a “talented, joyful, funny, smart creator”.

“It was very hard on us and it was very challenging news to hear. It was also pretty much devastating to the community of conflict photographers as well and the friends we had interviewed,” Yoon said.

From all the people who collaborated for this show, Yoon said Hetherington was the one who had worked with multimedia—new media, then film (he co-directed with Sebastian Junger the Oscar-nominated documentary film "Restrepo"  ) and an art installation. Conflict photography, Yoon said, was “his dream”.

The show's aim is to create consciousness, as people are inundated with an avalanche of news on the Internet or the papers daily, making it difficult to digest them all at once.

Photog is an opportunity to observe these real accounts in a different framework, allowing people to stop and reflect on these matters.

"It was to ignite and have people curious just not about the piece, but about what we are talking about, the conflicts that are being covered and then what's going on now," Yoon said.

"I think I'd like to leave up to the audience as to what to experience, what they'd leave with, but it's really looking through the history of news, in a very different way."

As for the audiences' feedback, Yoon revealed it was as much positive as it was varied taking into account the large spectrum of people from different backgrounds living in Canada—those who come from “challenging places" to those who "haven’t experienced violence at all".

The piece has toured Toronto, Montreal and Halifax.

“I mean, [it's] such a huge spectrum because there is a whole different kind of people here," she said.

"The response has been equally varied, when it comes people wanting to know what they can do to make change".

Photog plays from January 22 to January 26 at SFU Woodward Goldcorp Centre for the Arts at 8 p.m., no intermission. January 23 FREE pre-show screening of film "Restrepo" at 6:00 pm. For more information visit: pushfestival.ca 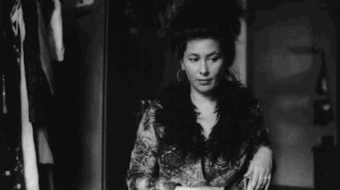