The Pineapple Express hit some Vancouver-area mountains with rain, others with snow. Plan your ski weekend accordingly. 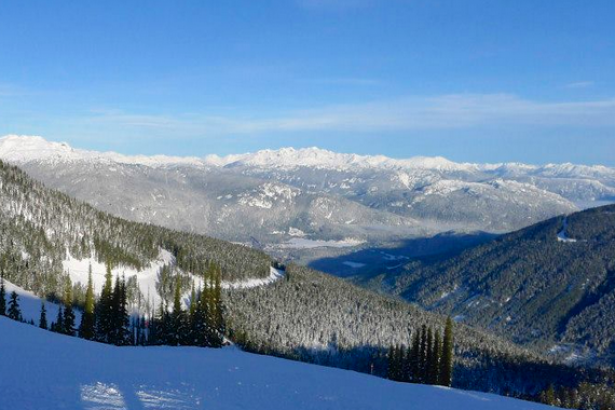 View of Blackcomb Mountain from Whistler. Do not expect bluebird conditions for the first weekend of March.

Ski preview for 1st weekend of March: Will it rain?

If you live in Vancouver, you've noticed what seems like unending rain. You're waiting to see elephants, giraffes, and rhinos troop past in twos. If you're not a skier or snowboarder, you're probably wallowing in Seasonal Affective Disorder.

However, if you are a skier or snowboarder, you're thinking, "Snow in the mountains."

Here's the lowdown on what to expect this weekend: we've got good news and bad news. Let's start local (Cypress, Grouse, Seymour), and then move on to Whistler and Mt. Baker, and the backcountry.

It's only just stopped raining at Cypress: the resort has been closed all day March 1. A staffer told me that Cypress is indeed set to open March 2, and have been grooming and snowmaking all day, even as they drain the rain.

Mount Seymour is also closed March 1, and scheduled to reopen March 2. Its forecast calls for continued rain, with temperatures of 3C. The staff continues to advise you to drive up with winter tires, or to carry snow chains.

Grouse has been closed all day, including the Grouse Snowshoe Grind. I called their guest services to see if they'd be open on March 2, but they still weren't sure as of this afternoon. The Grouse Mountain status report can be reached  at (604) 986-6262, and will be updated first thing in the morning on March 2.

It's puking like a university freshman up at Whistler. Canada's premier ski resort dodged a major bullet, as colder temperatures kept precipitation from turning into rain. Whistler is claiming 40cm in the past 24 hours, with up to up to 40 additional cm by tomorrow. Temperatures will be warm, though: near zero.

This means that, as you get closer to the Village, the snow may end up turning to rain; it might be miserable while you queue for the gondola, and it could well be raining as high up as Midstation. Whistler Peak and Blackcomb's Seventh Heaven Zone should be safe.

Whistler will be very, very crowded this weekend, as it's the only nearby ski resort that hasn't been lashed by rain for the past two days. Also, expect the heavy, wet powder for which Whistler is famous.

If you're keen to cross the border, you'll be rewarded with spring skiing conditions at Mt. Baker. It's currently raining and just on the cusp of freezing, though Baker has gotten almost six inches of snow in the past 24 hours. The forecast calls for dryer weather, in which case you'll get those fun, slushy turns; as if you're riding on a giant Slurpee. A good alternative to Whistler this weekend.

If you're a backcountry skier or rider, this weekend will be very dangerous for touring. For weeks, you've had relatively stable conditions with little new snowfall, and now all that is changing. The Canadian Avalanche Centre is showing heightened danger along the Sea to Sky, but treat anything out of bounds as more hazardous than usual. Also, here's a collection of storm-tracking maps, posted in the forums at Teton Gravity Research. Ski and ride carefully this weekend.

This is the biggest storm to hit the Lower Mainland all season, and it's due to the Pineapple Express. This phenomenon means heavy precipitation, which can be good for snow enthusiasts. However, what the Pineapple giveth, it also taketh away: warm winds drive this weather pattern, so whatever falls is usually quick to melt.