The Sea to Sky Gondola is a proposed gondola that will go up between Shannon Falls and Stawamus Chief (known as The Chief) Provincial Parks. The project dismays hikers, and pits a small group of vocal opponents in the community against the enthusiastic support of many residents, business owners, the Squamish Nation and city councillors. 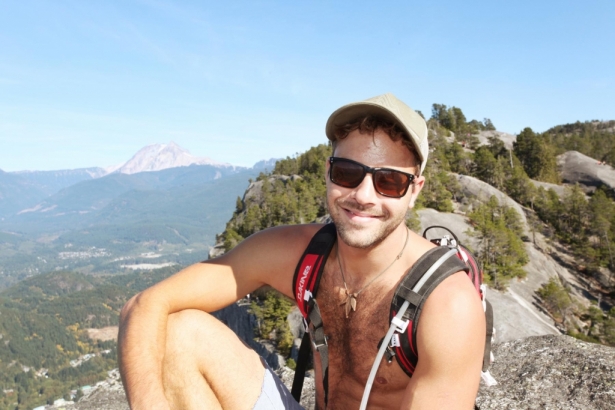 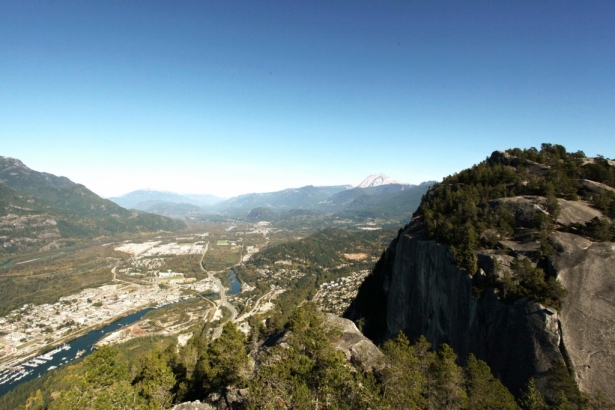 Greg O'Malley of Brackendale on First Peak at The Chief. All photos by Kathleen Kozak.

On a gorgeous Sunday on and around The Chief in Squamish, British Columbia, the Vancouver Observer found more people for the city's proposed gondola project than against it.

The lure of attracting up to 400,000 visitors annually and building the economy of the struggling town has convinced many it's a good idea. One thing everyone can agree upon is that the city is set in one of the most gorgeous areas between Vancouver and Whistler.

What appeals to many of the people the Vancouver Observer talked with is that the gondola could transform Squamish from somewhere people breeze past on their way to one of North America's primo ski areas to a popular destination in its own right.

Cautious optimism about the gondola in Squamish

Adventure Centre, Squamish's official tourist hub, is home to Gallileo Coffee. This is where many climbers and hikers grab coffee and check email before setting out. 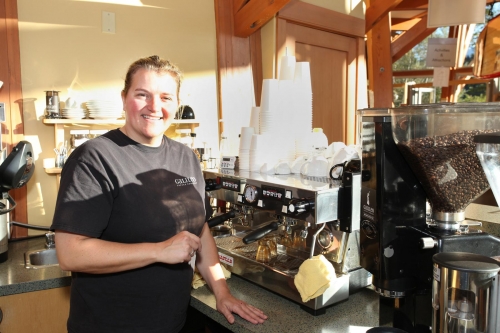 "I haven't read up on it as much as I should," co-owner Cara Barth said.

She added, however, that the gondola would bring more people "up the highway," and said her business would benefit from this.

"I can't think of what the other effect it would have on other businesses other than the Whistler gondola. It comes down simply to environmental things."

When pressed to elaborate, she said it depends on how the gondola is built.

"If it's not nice or not done properly, or not pulling in the money that makes it worth to take that hit, maybe it's not worth it," she said.

Sitting at the coffee shop charging his smart phone was 24 year old Paul Brennan, a mountain climber who frequents The Chief and said he relishes the climb. Brennan admitted that he didn't know much about the gondola— including where it would go—but was generally against the idea of a gondola near The Chief.

"It just seems strange to put a gondola in a place that takes only an hour to walk," said Brennan, who is originally from Ireland but has lived in Canada for the last seven months.

"The same has happened in some of the mountains in Scotland, people have put in gondolas and ski lifts and a lot of the local community are against it. What's the point of imposing something on the natural environment?"

Gondola a hot topic of conversation at First Peak

A sign at the path leading to The Chief reads, "This is not a walk in the park!"

An hour and a half of intense, almost vertical climbing later, hikers are rewarded with a dazzling view of Howe Sound, Squamish, Brackendale and beyond at the First Peak.

Three women who drove in from Vancouver and hiked up together lounged on the First Peak, cooling off. When asked their opinions on the gondola, all three immediately chimed in with their disapproval, based on their limited knowledge of the project.

"It'd be overcrowded and commercialized," said Hannah Foy, 36. "Why would you go where everyone is? It's a decent hike that's not too treacherous and it's a beautiful view and it's not too far of a drive." 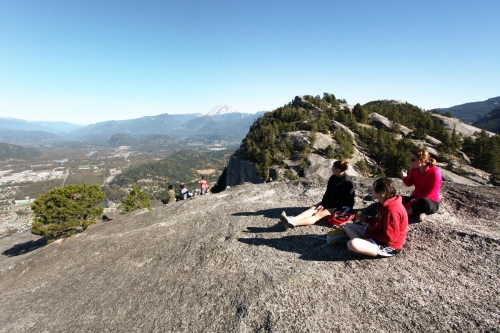 Christa Howe, Hanna Foy and Kim Christensen take in the view from First Peak at The Chief. Photo by Kathleen Kozak.

"You can go to Grouse or Whistler if you want to be on a gondola, not everything has to be commercialized," said her friend, Kim Christensen, 30. "You don't want to go where there's thousands of other people."

Meanwhile, Aaron and Jason Foote, two brothers in their forties who grew up in Squamish, disagreed.

"Anything that generates business in town is helpful, stimulates the economy and otherwise you don't want the town to die and everyone to get laid off," said Aaron Foote, 40. Foote, a firefighter who has lived his whole life in Squamish, added that there's a lot of economic development opportunities that don't go ahead for reasons he can't fathom.

A gondola for The Chief

A walk in the woods with Sea to Sky Expeditions

Sea to Sky Highway Cuts Through Mountain as Road Widens

City of Vancouver and Squamish Nation sign Memorandum of Understanding

Live at Squamish eclectic and folk-inclusive