Think hybrid: the case for ranked ballot plus proportional representation 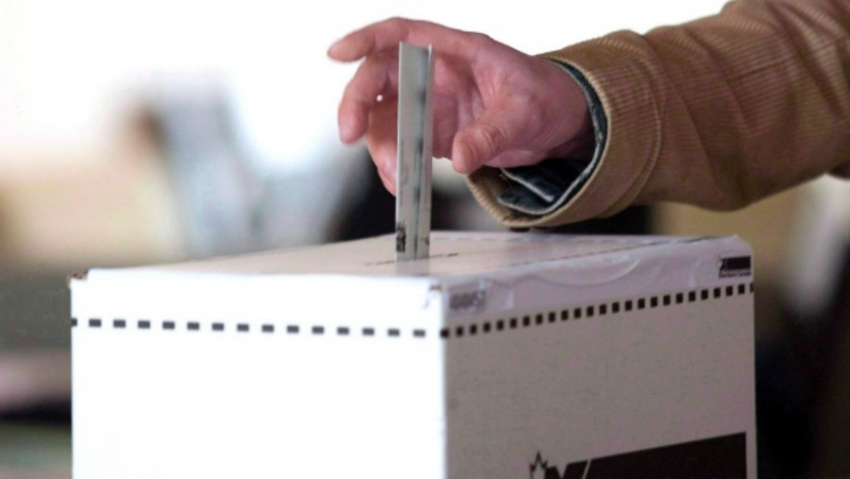 It would be regrettable if the unmistakeable sigh of relief which accompanied the election of the Trudeau government gave way to complacency.  Canadians should never forget that a “majority” government, one elected with far less than 50 per cent of the popular vote, could systematically mount an autocratic assault on democratic principles.  We merit an amended electoral system which enhances and defends democracy.

The Broadbent Institute recently released a comprehensive study on electoral reform which received praise from numerous Canadian groups concerned that the present First Past the Post (FPTP) system does not fairly represent each vote cast.  That feedback heavily favoured an alternative system of proportional party representation (based on party percentages of the national popular vote) over a ranked ballot (instant runoff or single transferrable vote) model.

Ranked ballot models allow voters to cast ranked preferential votes to best ensure that candidates who win closely contested ridings represent majority opinion at greater than 50 per cent. Their glaring downside is that minor party supporters do not see their first preferential votes fairly represented in Parliament as in various proportional models.  But for many voters, the complexity of the list systems utilized by proportional models highlights a distinct shift away from the traditional familiarity of electing one’s local MP at the riding level.

While campaigning in the Liberal leadership race, Justin Trudeau expressed a personal preference for a ranked ballot model, “wary of disconnecting any MPs from specific groups of citizens or geographic location”.  He went on to say that "The fact that every single politician needs to earn the trust of a specific group of constituents who cover the broad range of Canadian public opinion strengthens our democracy."

As Prime Minister, Trudeau has welcomed public debate on electoral reform.  He’s been cautious about pushing his own viewpoint and his preference may very well have changed over the interim.  Nonetheless, that previously expressed viewpoint regarding the traditional link between a riding and its elected MP will resonate among a significant number of Canadians especially rural voters.

We can incorporate that traditional local sensibility into a much needed upgrade to our electoral system by adopting a comprehensible hybrid model which uses both ranked ballot and proportional components. Such a hybrid would satisfy voter preference and MP accountability at the riding level while rectifying the failure of FPTP and ranked ballot models to enfranchise significant groups of like-minded voters within that broad range of Canadian opinion.

Adding in the second preferential votes to candidate totals would likely see winners in those closely contested ridings exceed 50 per cent of the total of all first and second votes cast.  In any event, they would more clearly represent the wishes of their riding’s constituents than under the present FPTP system. Like FPTP, though, the ranked ballot component would guarantee all current provincial ridings an elected MP seated in the House – no convoluted proportional national lists involved.

However, under the proportional component of this hybrid system, a political party’s actual voting power on the floor of the Commons would be adjusted numerically to reflect its percentage share of the national popular vote. This would raise the fundamental question as to what minimum percent of the popular vote constitutes a significant constituency of Canadian opinion (regardless of whether or not a party succeeds in electing an MP at the riding level).  Any party not achieving whatever minimum threshold was set would not qualify for proportionally adjusted voting seating.

Had the 2015 election been conducted under this hybrid model, Table 1 uses official Elections Canada data to illustrate an adjustment of Elected Seats in Column 1 to Voting Seats based on a party’s share of the popular vote.  With a 3 per cent minimum threshold in play, whereby both the Bloc and the Greens would qualify, Voting Seats in Column 5 are based on a party’s Percent of Popular Vote in Column 4.  With the threshold set at 5 per cent, neither of the two minor parties would qualify. The adjusted seat totals for the three major parties which do are shown in Column 6 with corresponding voting seat percentages shown in Column 7. 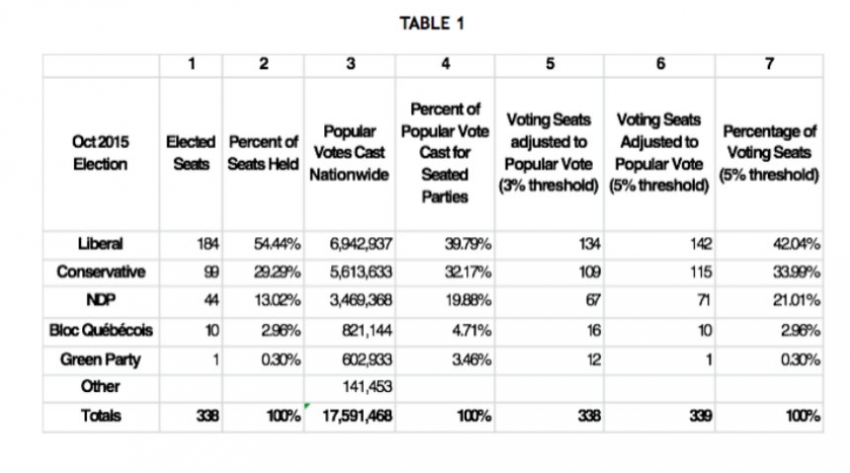 Requiring a clear 50 per cent plus threshold for attaining majority rule would marginalize radical political ideology.  Table 2 illustrates a hypothetical 2015 Popular Votes Cast outcome in Column 3 producing the same elected seat results as in Table 1.  Subtracting 120,000 votes cast for Other parties, the Liberals would have received exactly 50 per cent of the remaining 17,500,000 votes. With all parties qualifying for adjustment, Column 5 shows the Liberals holding half of the 338 voting seats.  Bumping those 169.0 seats up to 169.5, when they would round up to a majority position of 170 seats, requires 50.15 per cent of the popular vote.  That .15 per cent margin equates with an additional 26,250 Liberal votes in this example.

It’s important to emphasize that the ranked ballot component of this hybrid model would continue to fulfill the provincial representation formula for Commons seats mandated by the Constitution. Those 338 elected MPs could function much as they have under FPTP including funded riding offices and pension eligibility.  The ranked ballot component would also help well-established minor parties to increase their share of the popular vote, given that their supporters would have second preference hedge votes in hand.

The proportional component would inspire those absentee voters disillusioned with the present system to register and cast a vote, knowing that their first preferential choice would now meaningfully count.  Requiring a significant 50% plus public mandate for a single party to act as a majority government would acknowledge the varied cultural and political landscape of Canada.  Coalitions would simply highlight the compelling circumstance that we need to work collaboratively in the face of daunting challenges.

Consider as well that almost all Commons votes are iron clad party votes.  Essentially, there would be no difference between a minor party leader casting 12 proportionally adjusted votes and a major party leader expressing party policy through a homogeneous block of caucus votes consistent with that party’s share of the popular vote. Free votes would require procedural rules both to reflect diverse opinions among sitting MPs in a major party’s adjusted vote tally and to express a minor party’s polled membership opinion through its proportional votes.

The bottom line remains that amending our electoral system to enable minor parties to exercise proportionally adjusted voting power in the Commons would enfranchise the earned trust and support which a singular voting constituency extends to their party of choice and its stated policy objectives – at the polls.  The requisite minimum threshold for a party to qualify for proportionally adjusted voting seats would likely be set within a range of 5 to 10 per cent of the popular vote.  That should allay any fear of fringe parties messing up the works.

In January, and then again in late April, the Trudeau cabinet met with Michael Barber, a former distinguished British civil servant, who foresees a 21st-century political agenda that focuses on climate change, diversity, and democratic renewal.  Trudeau’s embrace of diversity in his cabinet reflects both an awareness of women’s rights and the pressing needs of Indigenous Canadians.  His legacy will also rest largely on whether he delivers democratic revitalization, in part as a needed antidote to longstanding political inertia in confronting the threat of climate change.

The pressing need for electoral reform bears heavily on the opaque presence (both in government and the drafting of trade agreements) of corporate lobbyists whose covert influence undermines democracy.  This influence has encouraged our disproportionate economic reliance on carbon based energy despite mounting evidence of environmental perils.

As to a remedy, there’s wisdom in Einstein’s caution against attempting to solve a problem from within the same mindset that created it.  As we face the unfathomable environmental, economic, and social consequences of tipping point climate change, adding a proportional representation component would refresh and rejuvenate our electoral system.

The international response to Justin Trudeau’s election continues to be indicative of how people across the globe still look to Canada as a beacon of hope. In that light Michael Barber alluded to an historic opportunity for Canada to lead with a 21st Century political agenda which fulfilled that hope. Fundamental electoral reform in support of democratic renewal is essential to that end.

The fringe parties comprising Other in Column 3 collectively represent less than 1 per cent of the popular vote, far below any reasonable threshold for proportional representation.  Hence, the spreadsheet percentages in Columns 4 and 7 are calculated by subtracting those votes from the Column 3 total.  If a minor seated party fails to qualify for proportionally adjusted seats, its share of the popular vote must likewise be subtracted so that Column 7 percentages total 100 per cent.  Additionally, that party’s share of elected seats must be subtracted from the Column 1 total so that the adjusted Voting Seats total in Column 6 closely matches the Elected Seats total.

Decimal rounding is fundamental to proportional electoral models because electoral results based on percentages of the popular vote must necessarily be expressed in whole numbers.  Dividing a party’s voting seats in Column 5 by the column total will yield a slightly different value than its corresponding popular vote percentage in Column 4.  Those differences bear on decimal rounding.  In Table 1, for example, 134.49 rounded down to 134 while 108.68 rounded up to 109.  Similar rounding bumped the voting seat total up one seat to 339 in Column 6.  The discussion above regarding Table 2 illustrates the inherent rounding factor in terms of actual popular votes.

In practice, since every province has a specific number of MPs, the proportionality cannot constitutionally be calculated nationwide, but must be calculated province-by-province, or even by regions within the larger provinces.