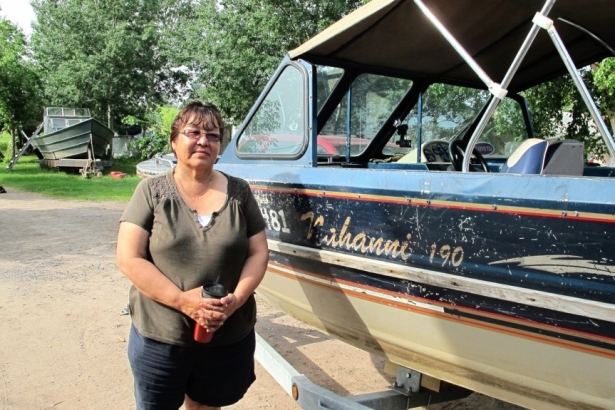 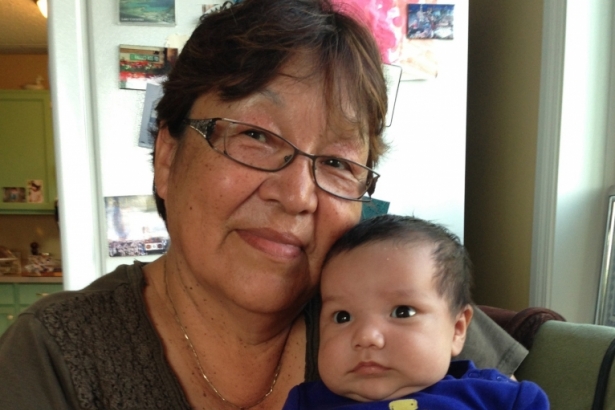 As I walk up Alice Rigney’s driveway in Fort Chipewyan, I pass a garden with vegetables growing, and a dog happily chewing on a bone in the shade. It's already 7 p.m., yet the air is still hot and humid, the sun high in the sky.

Inside, Rigney has just finished carving a caribou shoulder. She graciously invites me in for dinner and shares her story. Her story helps me understand the tar sands mega project as part of a broader colonial project and what is at stake for her family, community and culture if this project continues unchecked.

“It was a wonderful life”

Alice Rigney was born on the shores of Lake Athabasca, delivered by her maternal grandmother and raised at a Dene village called Jackfish. She and most of her siblings were born and raised on the land in the delta across the lake from Fort Chipewyan.

Rigney remembers the contentment, family, and sharing that knit the community together.

“When there was a hunt and a kill, everybody shared. And it was just the way things were. You shared with your extended family, and it kept everybody going. It was a wonderful life.”

She grew up speaking her Dene language, but on her 5th birthday in 1956, she was sent to a residential school in Fort Chipewyan. “In the name of God, they stripped us of everything we had” she tells me. “The Mission tore us out of the arms of our parents. Not only me, all of my family, but half of this community. They took away our way of life, our language, our pride, to where we ended up being ashamed of our parents. And we had to rebuild from there.”

Rigney’s tone softens. She tells me that at twenty-one, she returned home to the land, and began to heal. She picked up from where she had left off when she was 5 years old.

Rigney considers herself one of the lucky ones: She got her language back. “I was strong enough to say, ‘I am a Dene woman’. It was was my grandmother who told me that. She said that if you speak your language, your elders will know you. And that to me was enough to start speaking my language.”

Rigney tells me that it was in the early 1970’s that she started to see the first major industrial tar sands projects. “I was thirteen years old when I went to Fort McMurray by boat ... I remember we stopped at Suncor. And they were just clearing the land. The trees, the big white spruce towering 300 feet -- they were cutting them down. If you had asked me then would I ever think it was going to be the way it is now, I would have said no.”

“He said, 'there’s something wrong'. The ducks aren’t coming to the river in the fall. We had these little black beetles that skimmed the water and that’s what the ducks come and eat. He said, ‘the bugs are gone.’ That was probably one of the first indications to me that something was happening. And we knew, we knew that the tar sands were starting up. We never thought it was going to be like this.”

"They took away our water"

Of the impacts from tar sands industry, she tells me, “The biggest impact is the water. We drank the water from the river. We dipped our cup in there, and we drank...Industry takes four barrels of water to make 1 barrel of oil. And when you have plants on the Athabasca, each taking their allocated water, of course it's going to affect the water. And it’s our end. We’re on the receiving end. We’re at the bottom of the toilet bowl, physically.”