Fantasy gives us a safe place in which to deal with real-life issues, and Game of Thrones is a surprisingly effective tool for feminist discussion. (Spoiler alert, for those not caught up on the series so far.)

Game of Thrones Season Two brought us dragons, but Season Five may bring something to Westeros that its denizens will find even more wondrous and strange: feminism.

Not every character, though, functions to champion the notion that it’s a man’s, man’s, man’s world. Let’s start with the most staunch and terrifying feminist theorist in the Seven Kingdoms: Sandor “The Hound” Clegane. Yeah. 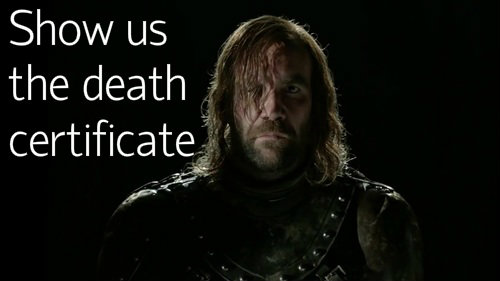 The theory and the practice

Early on, The Hound establishes himself as a buffer between Sansa Stark and Joffrey Baratheon’s douchey bullying. [The books, I'm told, suggest that the Hound has feelings for Sansa, but this is not pushed too hard in the HBO version; as you probably already know, I approach HBO's Game of Thrones having not read the books.] After crossing paths with the Minstrels without Borders, The Hound and Arya become a compelling action-comedy duo as they ride toward sanctuary and payday, respectively.

Arya is kind of Sandor’s hostage, kind of his student, kind of his friend, even though she has added his name to her ever-growing Shit List. Still, The Hound sees potential in Arya, since she’s from a historically badass family and clearly wants to avenge her father’s death. This is where The Hound’s feminism really kicks in.

The Hound repeatedly points out Arya’s feminine behavior, but he separates that behavior from her sex. In the 1990 book Gender Trouble, feminist writer Judith Butler presented the theory of gender performativity, the TL;DR version of which is that gender is something that we do, rather than something we inherently are.

That’s why Annie Lennox caused such a stir when she wore a power suit and crew cut in the instantly-iconic video for “Sweet Dreams (are Made of This).” In 1983, this was a really big deal.

Furthermore, how we even understand the concept of womanhood is based upon a long-standing power imbalance. None of us has ever known a time when women's rights were defined in any other way than in relation to male power.

So, is feminism the emphasis or de-emphasis of gender? Game of Thrones asks the audience this question a lot, whether or not the writers and show runners realize it.

Brienne of Tarth goes for the latter, but hardly anybody else in the Seven Kingdoms is on the same page. The Hound’s forward-thinking stance in feminism is quite casual. He doesn’t make a big thing about it, probably because he wouldn’t consider himself a feminist. That, however, does not prevent him from committing act after act of feminism, even if some of those acts are based in selfishness, but... baby steps.

In fact, The Hound would seem to be the only male feminist advocate in the Seven Kingdoms. Even though he uses the four-letter C-word liberally in front of Arya, The Hound doesn’t think twice about risking his freedom and his life to defend her from anyone who so much as looks at her funny. This tendency continues after any hope of a ransom has evaporated: what you think you’ll get a buck out of the Night’s Watch out of Castle Black? As Biggie once said, “Shit, forget it!”

In admonishing Arya for "fighting like a girl," The Hound makes it clear that she is not her gender. He encourages her to reach her personal potential, even though she has stated quite unequivocally that she intends to use that potential to kill him.

What is a feminist character?

Here we must separate feminist characters from characters who are feminist. For example, Cersei Lannister is a character who is feminist, but she is not a feminist character. Her sex and status as a mother are the foundations of her negative character traits. Her moves are totally framed within a male-dominated power structure.

Game of Thrones S04E10 recap and review: 'The Children'

Game of Thrones S04E08 recap and review: 'The Mountain and the Viper'