If it were any other country, this southernmost fjord in the Northern Hemisphere would be declared a national treasure and protected.  Like Stanley Park.But it isn’t. 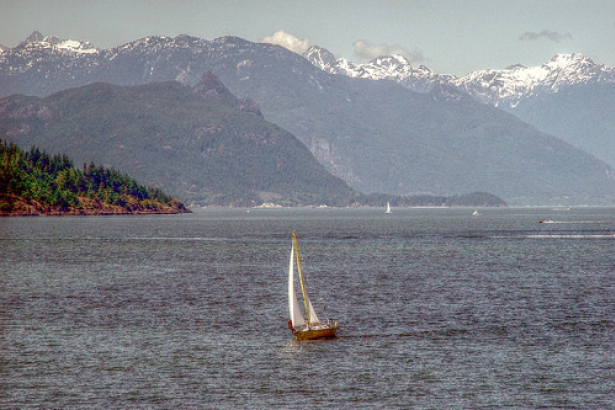 For most Vancouverites, the journey through Howe Sound is a visit to an iconic part of BC’s coastline. So close and accessible from the city, the Sound’s sweeping vistas of mountains and islands, of gliding sailboats and ferries, of thundering Shannon Falls, of the towering face of Stawamus Chief, have long helped Lower Mainlanders feel connected to “Supernatural BC”.

Concurrently the tourist gateway to Squamish and Whistler, the idyllic setting of so many ads featuring sleek automobiles winding along the shoreline, the Sound is, in the words of the local MP, “God’s cathedral”. If it were any other country, this southernmost fjord in the Northern Hemisphere would be declared a national treasure and protected.  Like Stanley Park.

But it isn’t. Picture a vista of the Sound filled with a smoke-belching garbage incinerator, a gas pipeline, a floating LNG plant with its roaring flare-stack and smoggy emissions, an open-pit gravel mine noisily munching the estuary of the Sound’s major salmon-bearing stream and an ugly clear-cut of parts of the Sound’s largest island.  Hardly “Supernatural”, is it? The map and list below shows the projects currently proposed for Howe Sound. 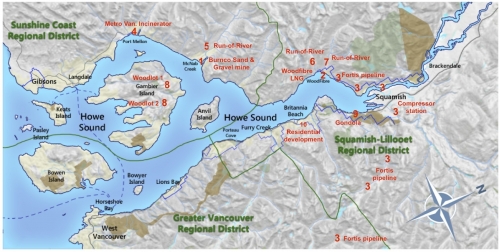 This “re-industrialization of Howe Sound” is a step backwards into the past. The recent return of herring and salmon stocks, of Orcas, dolphin pods and humpback whales, is happy testimony to nature’s resilience. There is again a commercial fishery – opened because of the taxpayer-funded cleanup of pollutants left over from the last industrial age in the Sound and the efforts of dedicated Streamkeeper volunteers. It is a timely reminder that those who forget history are doomed to repeat it.

The Future of Howe Sound Society (FHSS) echoes the concerns of those who live there and who wish to retain its close-to-nature character and its current residential, recreational and tourism mix. The recent spate of development proposals will have a dramatic impact on the region. Which is why FHSS believes it is essential to develop a comprehensive land and marine use Management Plan before it is too late.

See more
The road to hell: B.C. will struggle to meet its emissions targets
Why Petronas is out of step with Premier Clark's LNG dream