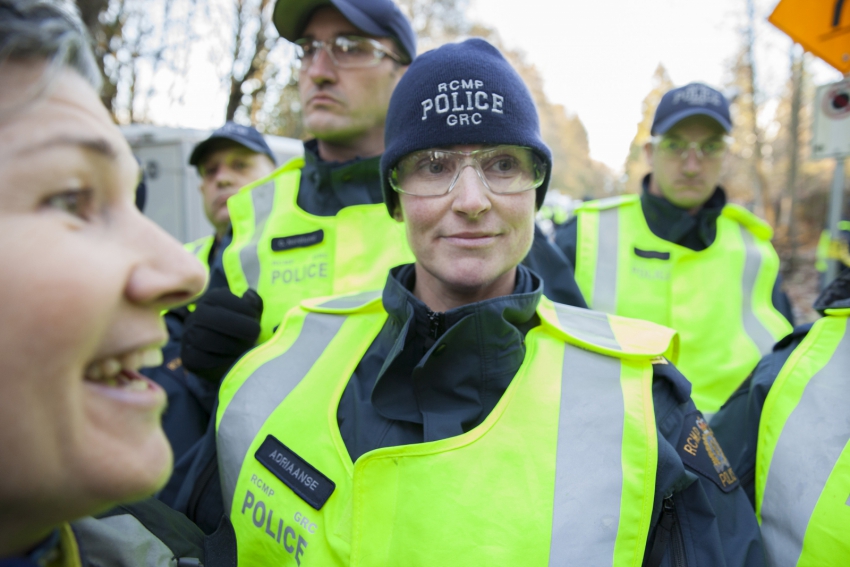 RCMP face Kinder Morgan protesters on Burnaby Mountain at the edge of the injunction zone on Sunday. Photograph by Mychaylo Prystupa.

During the afternoon of Saturday, November 22, I chose to cross the police line and submit to arrest at borehole #2 on Burnaby Mountain. I was taken into custody and charged with Civil Contempt of the Order and Injunction pronounced by the British Columbia Supreme Court on November 14. How did this happen?

I’m 68 years old and I teach a course in interdisciplinary thought and practice at the University of British Columbia, as well as a course in systems thinking, worldviews and ethics in the Environmental Education and Communication graduate program at Royal Roads University. In teaching these courses it has become more and more clear to me that we are all embedded in our current dysfunctional political and economic system; there are no angels or demons here, no easy solutions. We all live lives of contradiction.

We all try to do the best we can. 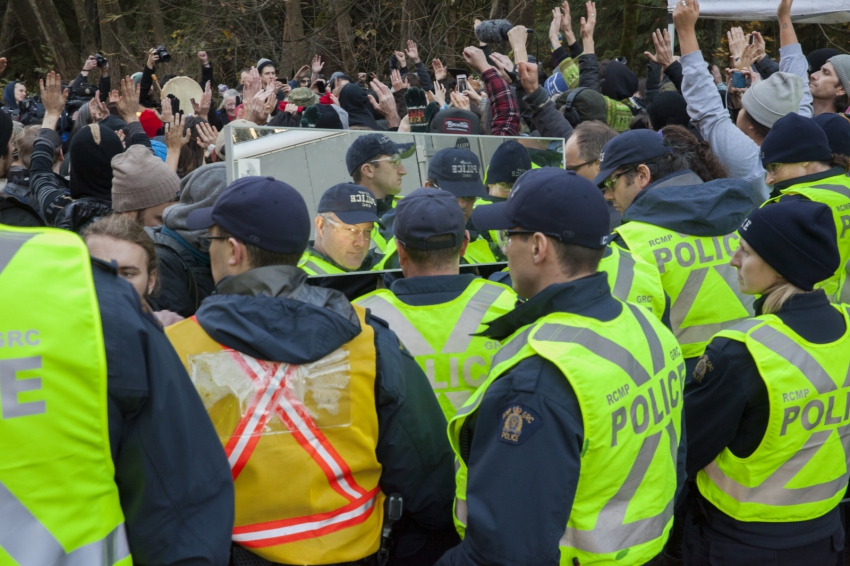 Mirror held up to RCMP officers at the police line protecting the Kinder Morgan injunction zone where drillers were working on Sunday.  Photo by Mychaylo Prystupa.

Each September I spend a month alone in the wilderness to directly experience belonging in (and to) the world of lakes, mountains, trees and sky. To feel, again, in my bones, that the earth is my home. I’ve long recognized that climate change is real and is largely the result of human activities, and yet I don’t live as though I actually believe such destructive changes are happening. Sure, I recycle, drive an old Honda that uses little gas, minimize my driving, sign petitions, etc, but for the most part I go through my days as if everything will just keep on keeping on.

When I heard about the protest on Burnaby Mountain, I decided to go up and lend support. During my first several visits there were no police in sight. That changed last Thursday when the RCMP moved in to enforce the injunction handed down by the BC Supreme Court. We’ve seen media photos and video of the physical conflicts that have sometimes developed, but those instances have been rare and it’s important to keep them in perspective.

On Thursday I was quietly sitting in my chair just to the side of the main body of protestors, when the RCMP’s shoulder-to-shoulder line started to push everyone back up the road so as to cordon off a larger prohibited area. Things were tense, but I decided not to move unless specifically asked.

Even though I was within the newly stretched yellow ribbon, no one asked me to leave. After an hour or so I heard an officer ask another one who I was. The response was, “We don’t know, but he’s not causing problems so we’re letting him stay.”

During the 3 ½ hours I sat there, meditating and quietly watching, several of the RCMP came over to ask if I was OK. They said I looked cold and offered me a blanket, water and other hot and cold beverages. I politely declined everything. What I wanted was to pee, but I didn’t want to move. One of the most solicitous of them said he had sort of adopted me and was concerned for my well-being. 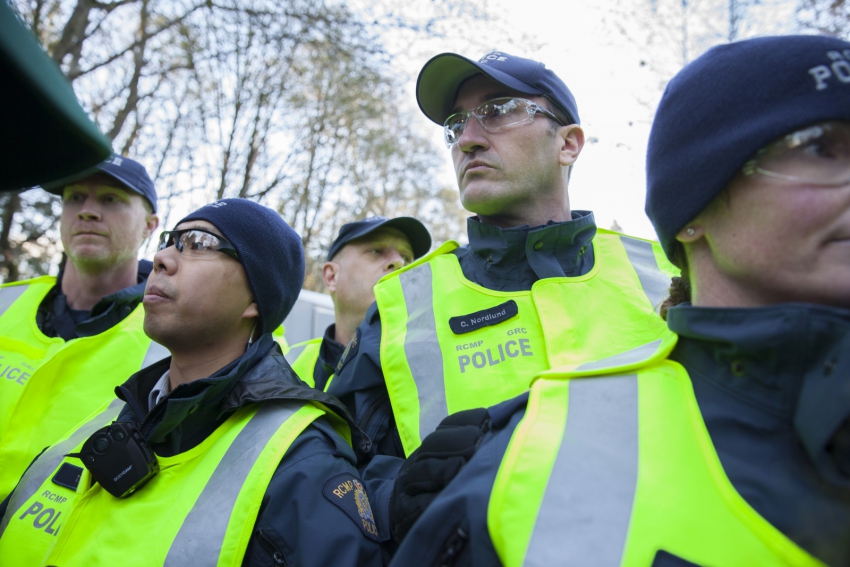 At 4:30 another officer came over to say that heavy equipment was coming into the area and they were concerned for my safety in the gathering dark. He asked if I'd move to outside of the cordoned off area. I politely told him that I was considering whether to be arrested rather than move. He said he'd give me a few minutes to decide. I thought it over and decided it was time to go home. My 3 hour shift was over.

Mostly the day was peaceful. With a few exceptions, the RCMP were friendly and polite, except when someone physically challenged them, and then their response was instant and overwhelming. One of them told me he was glad we were there standing up for what we believe. I suspect many agree with the protest, but they have a job to do. It’s a tough spot for them to be in. And of course some of the young protestors had their testosterone flowing.

Shortly after I arrived to the mountain on Saturday, I decided it was time to submit to arrest as an act of civil disobedience. The drilling rig was operating in front of us and I could no longer fail to respond. I told two of the RCMP on the line that I was going to peacefully step across, and that I have a prosthetic leg and buggered up shoulder. They walked me toward their van without putting hands on me.

Seeing us walk in, the officer who had "adopted" me on Thursday came up and said he was glad to see me.

He thought I was returning to the spot where I'd been sitting, and when I told him I’d been arrested, he was upset and said, "You don't want to do that. Can I talk to you for a minute first?”

“Sure,” I replied, “but I've made up my mind.” Then another officer came up and said we had to move the arrest process forward.

Again, everyone was polite, friendly and concerned for my wellbeing. Before climbing into the back of their car, I asked if I could bow to the four directions and they agreed.

I was locked into a cell for about 4 hours as they processed me and others that earlier in the afternoon had been arrested. I thought I would need to catch a bus back to my car (again the contradictions) and they went online to find the route and schedule for me. But on my release a group of supporters was waiting outside. They had been there in the chill afternoon and night for hours to be sure each of us had someone to welcome us. They greeted me warmly and gave me a ride.

This was not even close to being one of the more unpleasant experiences of my life. My biggest complaint was that the blueberry muffin, served as part of dinner in the jail, was tasteless. It is so easy to demonize the RCMP and to focus on their at times very problematic behaviour. So I think it’s important to also acknowledge when they behave not only professionally and respectfully, but also show friendship and kindness.

They, like all of us, are embedded in a dysfunctional system that needs to change. This will be a long process of waking up and learning to live in different ways. None of us has a complete solution to our current difficulties, but it’s vital that we move in a positive direction. Expanding pipeline infrastructure and the tar sands is not a positive or sustainable direction.

See more
The response to my arrest on Burnaby Mountain