Protesting on Burnaby Mountain was my obligation as a scientist, parent and Canadian citizen 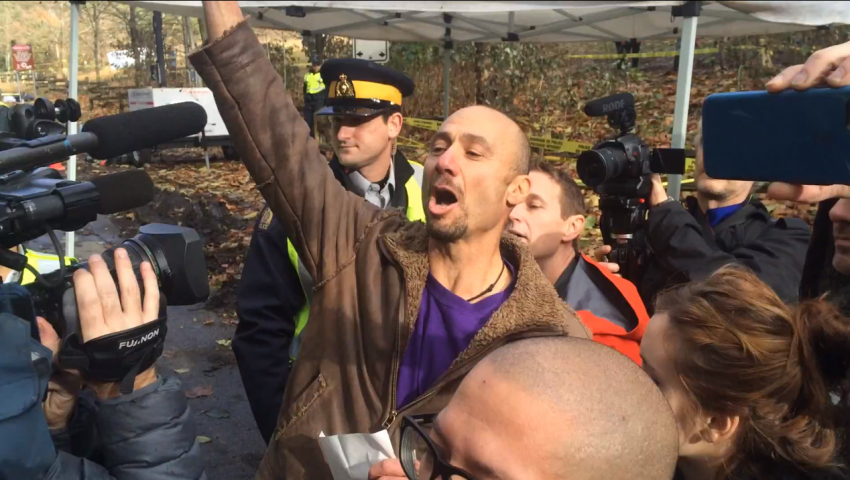 The following is an op/ed contribution from scientist Alejandro Frid, PhD -- a conservation ecologist with the Central Coast Indigenous Resource Alliance.

Harper’s conservative government is working hard to turn Canada into a petrostate. Their tactics include blatant inaction on climate change, dismantling environmental legislation, stripping government scientists from their ability to communicate research findings to the tax-paying public, and spying on citizens who, like me, dissent.

Consistent with these tactics, Harper tasked the National Energy Board (NEB) with examining whether building new pipelines that enable increased exploitation of bitumen from the Alberta tar sands is in the best interest of Canadians. Proposed infrastructure under current NEB “scrutiny” include the Trans Mountain pipeline by Houston-based Kinder Morgan, which would increase the capacity to transport tar sands bitumen to an export port in Vancouver, and the Northern Gateway pipeline, which would transport bitumen to the export port of Kitimat. The NEB has approved Northern Gateway and appears to be well on its way to doing the same for Trans Mountain.

The NEB, of course, is a blatant sham, a smokescreen, a club that exists solely to advance the interests of fossil fuel corporations. This assessment is consistent with the conclusion of Marc Eliesen, an industry insider who public resigned as intervenor in the NEB Trans Mountain hearings, stating in the Globe and Mail:

“To me this is a farce: There is no way you can test the evidence if they won’t answer the basic questions. Unfortunately, this board is not objective. This board is biased.”

While the above quote speaks volumes, for many of us the real clincher is this. The NEB process considers only local impacts—oil spills and the like—while ignoring climate change. This is the equivalent of banning discourse on respiratory disease and asking, “Is it in the best interest of Canadians for the cigarette industry to market their product for toddlers, or would the plastic wrapping of cigarette cartons pose a choking hazard to that age group?”

Opposition to Kinder Morgan is substantial. In a rather interesting twist of fate, the proposed route for their Trans Mountain pipeline includes the outskirts of Simon Fraser University in Greater Vancouver, where academics and other senior professionals can easily join First Nations and other citizens in opposition, some choosing civil disobedience.

Of course, I had to follow suit. On November 22, 2014, I joined what may be the first sustained, multi-day act of civil disobedience against climate change inaction. That day, I crossed an injunction line excluding the public from the Kinder Morgan pipeline “study area”.

As captured in my video, these were my thoughts at the time:

I am here because it is my moral obligation as parent, an ecologist, a human being, a citizen of Canada. I am here because climate change is the issue of our time. As an ecologist who understands the scientific literature, I know that a rapid transition to large-scale use of renewable energy is no longer a technical issue, but rather one of political will.

The decisions we make today on how fast we phase out fossil fuels will affect the chemistry of the ocean and atmosphere for many centuries to come. It will make the difference on whether my daughter will have a livable planet…or not.

As a parent, ecologist, and human being…I can no longer tolerate inaction on climate change by the federal government. Which is precisely why it is my moral obligation to engage in the act of peaceful civil disobedience that I am about to commit. With this act, I am sending the message to the federal government that we want Canada to be a country that stands for democracy and climate justice.

In crossing the injunction line, I helped raise the arrest tally to 53 (with more arrests happening since). This meant hand cuffs, a police vehicle ride, and almost eight hours under custody, with about four hours in solitary confinement in a cold cell without food or water. While police treated us courteously (as we treated them), I cannot help wondering whether the solitary confinement reflected top-down orders from corporate board rooms. Having been previously apprehended for blockading a coal train but released within an hour, my past experience suggests that a much faster release without solitary confinement was within the scope of police discretion.

Was my peaceful act of civil disobedience consistent with my obligations as a scientist who understands climate change? Absolutely.

While I do not suggest that others should answer in the same way I did, I do encourage all scientists and other citizens to ask themselves the same question and to respond—in a thoughtful and informed manner—with the actions that best apply to their personal context.