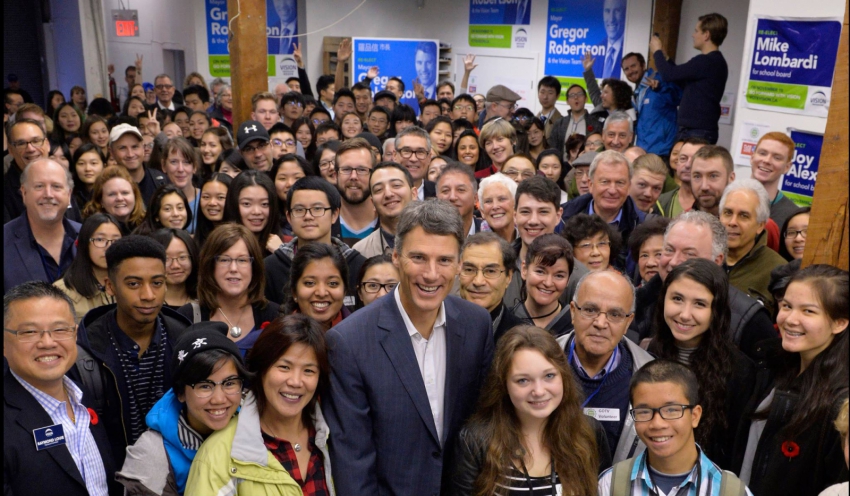 I strongly support Gregor Robertson and the entire Vision Vancouver team. As a close friend of Gregor Robertson's and a longtime supporter of the Vision team, I've worked in all of their campaigns.

I believe in Vision’s ability to resolve the long-term livability and sustainability  issues of our city and to move the city forward in many other important ways.

Vision's leaders are tackling the problems that result from the irresponsible vacuums left by the provincial and federal governments by: building shelters for the homelessness, resolving mental-health issues, slum-lord crackdowns, and social and rental housing expansion.

And making our communities inclusive, accessible, and affordable in a variety of concrete ways.

Vancouver is a remarkable city that attracts immigrants from all over the world, because of its natural beauty, inclusiveness and relative security.

Yet that which drew us here, Vancouver’s natural beauty, is also what creates one of its biggest challenges:  housing.  Vancouver is geographically limited. Locked in on one side by the Pacific Ocean and on the other by mountains, demand  for affordable housing has seriously outstripped supply and driven prices up.

This is a problem for desirable cities worldwide. And although there is no magical solution to this, there are a variety of responses that will bear long-term results.  Vision is working hard on these.

Opponents offer to study the problem of housing more, or claim they can get Stephen Harper's help, but, in fact, they reveal no new ideas. It’s easy to criticize and much harder to genuinely resolve such problems. These opponents represent yesterday's culture. They are hyperbolic and attempt to distort the facts, using emotions such as fear and anger.

With all that’s facing us in the world today, this is no time to retreat into their mindset of regressive, reactionary self-interest — particularly when they offer no concrete solutions.

There have been missteps by Vision, particularly in certain public consultation processes. All politicians make mistakes. They’re human. But Vision’s city councillors, park board members and mayor have listened and learned.

I believe we have to think carefully about trading the experience and learning Vision has been through in the six years during which they have diligently shown up for the job day after day, hour after hour, for new people with unclear aims.  What are their real agendas and who will gain if they win?  Will it be Vancouver?

Below is a short-list of ten of Vision’s accomplishments, each a compelling reason to keep Vancouver moving forward under Gregor and the Vision team.  Let’s stay on course, do better, and work together to face what the future is bringing.

The NPA campaign has been assisted by Clark’s former principal secretary, Dimitri Pantazopoulos, a Conservative strategist whose past employers include Stockwell Day, Stephen Harper, and Rob Ford. The NPA has narrowed the lead between Gregor and Kirk LaPointe to only four points, with 27% of voters undecided. The NPA is pulling out all the stops to get enough undecided voters to take a surprise victory (remember Christy Clark in 2013?) while the rest of us stay on the fence or sleep in.  Just watch this video where Pantazopoulos addresses the Manning Centre on why conservatives should target municipal elections to roll back taxation and regulation.

To find out where to vote, click here. To do even more, take the “Faberge Organic” shampoo ad approach to democracy: email, call or text two friends to vote and ask them to tell two friends.

It's go time, Vancouver. As they say, democracy is not a spectator sport. If you want social justice, a green future and progressive leadership in this city, now is the time to act. Energetic, innovative, diverse elected officials, who have a proven track record working to better our city, are the only way forward. 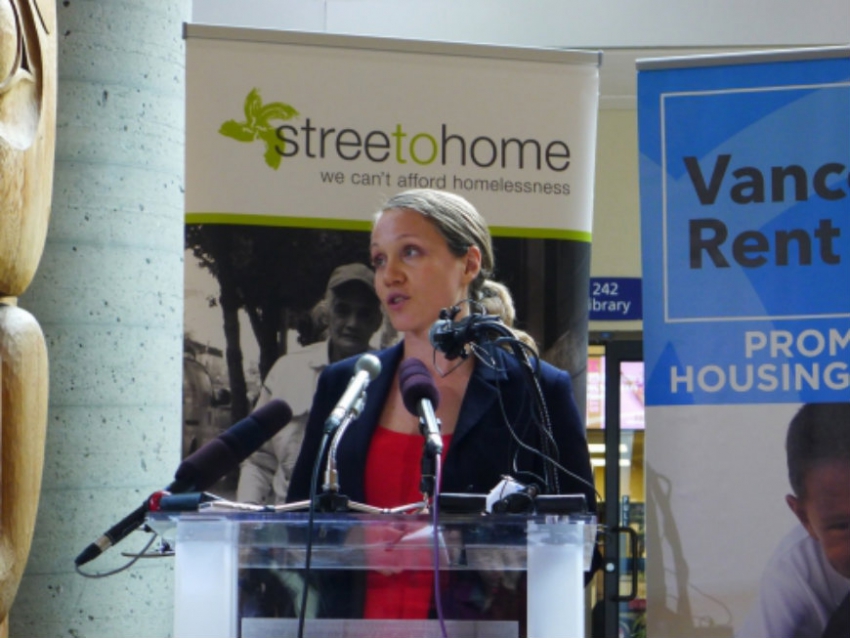 Photo of one year anniversary of Vancouver Rent Bank

In the past six years, the Vision team:

2)  Launched the Vancouver Rent Bank to give short-term loans to low-income renters in danger of being evicted. In its first year, the Rent Bank supported 228 people — including 39 children — from becoming homeless.

4) Partnered with the Province to establish an Assertive Outreach Team to support people with severe mental illness and addictions — and expanded the City’s Homeless Outreach Team to cover the entire city, providing more services to vulnerable residents.

6) Approved the most accessible building code in Canada, with requirements for wider hallways and doorways, automatic door openers at the entry of apartment buildings, and measures to upgrade homes as people age in place.

7) Created over 1,000 new rental homes by introducing laneway housing, and created Vancouver’s first Affordable Housing Authority (AHA). AHA is an arms-length organization that will work with the private sector and non-profits to build affordable housing on city-owned land.

Editor’s note: Joel Solomon is the brother of Linda Solomon Wood, who is The Vancouver Observer’s founder and editor in chief.

See more
Big oil a big mistake: a $50 billion kick-off to the carbon divest-invest movement
Spare Set of Lungs, Anyone?