“A great evil has been descending on our world.”

Not climate change. Not the global arms race. Not racism, homophobia, or the absolutely colossal imbalance in material possessions between the .1% and the rest of the world.

This evil, according to Canada’s prime minister, is the presence of increasingly numerous and dangerous terrorists who, Mr. Harper says, have begun to “refine and adapt their terrorist methods” as they threaten the integrity of Canada. That means “the police and national security agencies need additional tools”.

Not that he hasn’t described the world in similar terms before. Back in 2011, in a Maclean’s magazine interview, a reporter said: “You suggest that we are in one great conflict, or that we’re heading to one that we need to be prepared for.”

Harper replied:  “I think we always are.”

He says he sees threats everywhere, growing and multiplying like mushrooms in the grass overnight. Scaring Canadians distracts them from the inconvenient truth of plummeting oil prices and a slowing economy, which is good for Mr. Harper's chances of winning another four years for his Conservative majority.

Bill C-51 is another of Harper’s infamous US-style omnibus bills. It is so byzantine that it takes a full paragraph to begin to describe it:

“An Act to enact the Security of Canada Information Sharing Act and the Secure Air Travel Act, to amend the Criminal Code, the Canadian Security Intelligence Service Act and the Immigration and Refugee Protection Act and to make related and consequential amendments to other Acts.”

Read it carefully and you'll see that this act creates Canada’s first truly secret police, a reversal of the condition under which CSIS – the Canadian Security Intelligence Service – was created in 1984. This is precisely because the combination of secret intelligence gathering and policing had led to clandestine “dirty tricks” by police against Canadian citizens.

Originally focused on foreign agents, CSIS under Harper's Conservative majority has increasingly focused on Canadian citizens and on presumed terrorist activity on Canadian soil. Since he’s been in power, Harper has pushed the RCMP and CSIS to monitor environmental activists, especially those opposed to the expansion of fossil fuel extraction and use.

In fact, on Feb. 11/13, Harper’s new security chief and former CSIS head, Richard Fadden, admitted that almost all of its spying was now done in Canada, on Canadians – especially Canadian environmentalists – noting that the agency was “following a number of cases where we think people might be inclined to acts of terrorism."

Now CSIS won’t just follow cases and gather information. They will  become the secret police that the RCMP once were, but without any associated visibility, and with far less accountability and oversight.

Virtually every major media player in Canada has protested this development.

Who will CSIS come after? Nobody knows, but the latitude allowed in the language of this new bill – “terrorism in general” is the vague phrase at its core – is worrisome.

Chain yourself to a grossly polluting waste treatment plant? March down the street protesting the oil sands? Join the protests in Quebec over student fees, or against the G-8, or G-7, or G-20? Write an editorial endorsing civil disobedience against unfair laws? 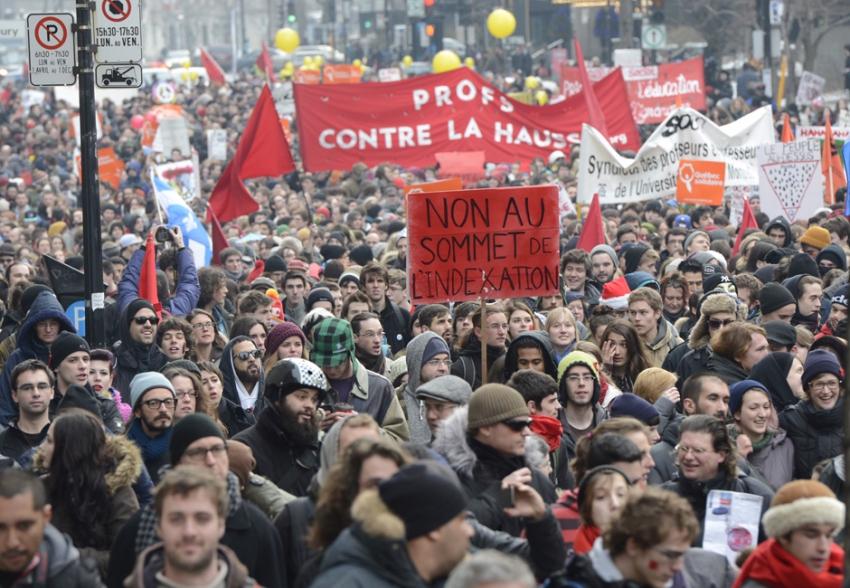 Such activities can easily run a person afoul of the new police-like CSIS.

A clause affirms: “For greater certainty, [the Act] does not include lawful advocacy, protest, dissent and artistic expression.”

But we have seen how fluid the Harper definition of “lawful” can be. And how, through such means as CRA audits and the cancelling of sometimes decades-long funding, he can be vindictive towards non-profit organizations and individual citizens who “lawfully” protest his government’s policies.

Now CSIS can jump on the persecution (or prosecution, or “disruption”, says Bill C-51) train – in entirely undisclosed ways.

Animating this interest in Canadian citizens is the constructed narrative of “Islamist jihadists” supposedly threatening to destroy the values that Canadians hold dear. The inflamed rhetoric of the undoubtedly brutal Islamic State (ISIS or ISIL), encouraging armed attacks on Canadian soil, has quite possibly contributed to two agitated and unstable individuals, with no discernible direct or indirect ties to this group, committing violent acts.

Yet it would seem, according to the prime minister, that we should all be surrendering our civil rights in order to stop….what? Waves of enraged ISIS fighters storming Halifax or Kitimat or some other Canadian port in small boats?

It is time for cool heads to prevail and the utility of such valuable and up-to-date approaches as mediation and non-violent conflict resolution to be affirmed. It’s time for our government to spend more time and money on promoting real “Canadian values” – like caring for others enough to refurbish the tattered social safety net for mentally ill and marginalized persons, or to create a real support system for youth, so that they are not susceptible to inflammatory and hyperbolic promises, and can follow more constructive and expansive dreams.

I  am sick and tired of dangerous gamesmanship for the purpose of gaining political points in an election year. I long for genuine, positive, future-oriented leadership, not fear-mongering and tightening of the screws against manufactured and essentially ersatz threats, at the expense of the civil rights that really are at the centre of Canadian values.

John Baglow, writing above in the Toronto Star, quotes Benjamin Franklin: “Those who would give up essential liberty, to purchase a little temporary safety, deserve neither liberty nor safety.”

Canadians can’t wait forever for a better vision of the world and our place in it.