Patti Bacchus was one of the VSB trustees who was fired. This is her analysis. 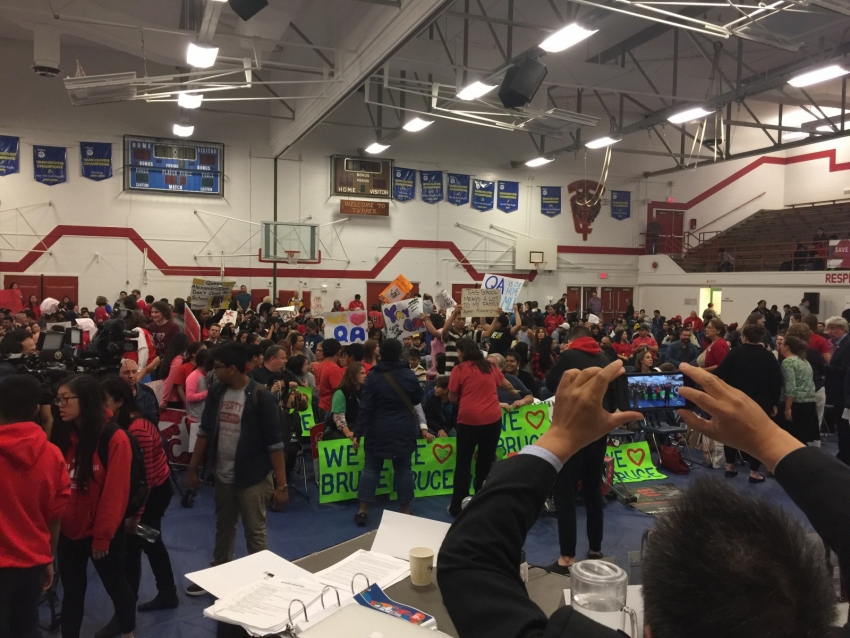 The crowd gathered in the Tupper Secondary gym for what would be a difficult and emotional Sept. 26 meeting regarding the potential closure of several Vancouver schools. Photo: Patti Bacchus

Remember that WorkSafeBC investigation Education Minister Mike Bernier ordered in October regarding the Vancouver School Board (VSB) and its alleged “toxic” environment? It was a couple of weeks before he fired the board on Oct. 17.

I found out about it on Friday, Sept. 30 when Global News BC reporter Rumina Daya called me for comment on two letters alleging a toxic VSB work environment. She said Global’s Legislative Bureau Chief, Keith Baldrey, had them. One was from Richmond School Superintendent Sherry Elwood and the other from Deputy Education Minister Dave Byng.

I was an elected VSB trustee for eight years until I was fired in October 2016. For six of those years I was board chair. Yet these allegations were complete news to me.

I thought we might have a scandal brewing along the lines of what happened at the Toronto District School Board (TDSB) a couple of years ago with its alleged “culture of fear” and a trustee charged with forcible confinement and harassment of a senior staff member.

Or maybe a trustee had made a racial slur like the situation in the York District school board. I didn’t think anything like that happened at the VSB but I wanted to find out, particularly given that six senior VSB staff went on sudden, unexplained leaves in late September.

I wrote about that here. The first to go was secretary treasurer Russell Horswill on Sept. 26.  He’s now working in another district. The second went the next day — the superintendent of schools, Scott Robinson, who remains on leave. A few days later the district’s four associate superintendents left too.

They went without warning and gave no reasons, leaving thousands of staff and students behind. This was unprecedented. Some called it a management “unstrike”.

The board moved quickly to stabilize the district by appointing its recently retired superintendent and secretary treasurer. And then came the letters that found their way to Global BC before we knew about them. The plot thickened.

Bernier referred the letters to WorkSafeBC and asked them to investigate. When there are allegations of this nature the employer organization is obliged to investigate, so the VSB started its own process.

Usually there’s just the one investigation — the employer’s. But since Bernier called in WorkSafeBC as well, there are two investigations and they’re both ongoing — two-and-a-half months after Global News obtained the Elwood and Byng letters.

What also seems unusual is that there isn’t, as far as I can tell, a VSB employee complainant — just the letters from Elwood and Byng.

I haven’t been able to identify a smoking gun à la the Toronto District or York boards — no threats, confinement, pushing, shoving or racial slurs.

The most I’ve been able to extrapolate from what I observed at a large public VSB meeting on Sept. 26 in the Tupper Secondary gym, is that staff may have been upset by what transpired.

That was the night trustees voted to proceed to public consultation regarding the potential closure of 11 schools. It was a difficult meeting for all — trustees, staff, students, parents, community members and some East Vancouver MLAs. The crowd was large and many in it were emotional. Some heckled. The gym acoustics were poor and the prospect of 11 school closures was rattling trustees and staff.

From what I can piece together, staff seemed to balk at two motions I’d submitted for the board’s consideration.

One was to ask the City of Vancouver to analyze VSB closure reports’ population projections to ensure they factored into all of the city’s community and development plans.

Parents, students, community members, MLAs and city councillors were asking us lots of questions about the numbers. The motion seemed like a reasonable way to allay public concerns and ensure we were doing our due diligence by double-checking all projections and numbers and confirming that the VSB was on the same page as the city.

The motion carried but two Non-Partisan Association (NPA) trustees objected, saying the motion could “hurt staff’s feelings.” This struck me as absurd — staff are professionals and we’d acknowledged the quality of their report and this wasn’t a criticism of their work. This was a response to public feedback and a commitment to due diligence.

My second motion attempted to address growing public outcries about the proposed closures’ disproportionate impact on East Vancouver — home to all but one of the schools on the chopping block.

It called for a revised report adhering to the board’s criteria set out in its long-range facility plan that counted students living in their school catchment area. The staff school closure report took a different tack. They based their recommendations on numbers that also included students attending cross-boundary in determining if students could be relocated to schools near the one being considered for closure.