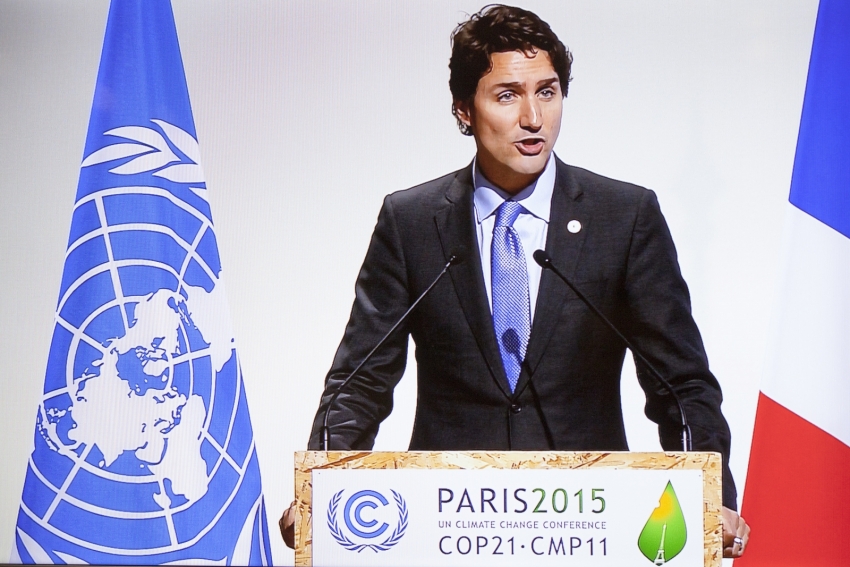 Not only did these months shatter temperature records – they broke them by the biggest margin ever.

Earth’s climate is going haywire. Wildfire season has arrived earlier than ever. Melting ice in the Arctic is months ahead of where it should be. We’ve more or less lost the Great Barrier Reef to warming waters. Temperatures are already approaching the 1.5 degree limit set at global climate talks in Paris.

With the quickening impacts of climate change becoming impossible to ignore, it’s getting harder and harder for people (and our leaders) to pretend there’s nothing to worry about.

Climate denial is finished. Good riddance and goodbye. Nobody outside of the Republican leadership race can deny the reality that climate change is happening, humans are causing it and action is urgently needed.

For nearly a decade Canada ignored this reality. It pulled out of the Kyoto protocol and sabotaged international climate talks. Precious time was lost.

But politics have shifted. A new federal government came to power on the promise to make tackling climate change its top priority. In Alberta, home of the tar sands, there’s been a political earthquake and a new climate plan has been passed that was unthinkable just a year ago.

Here in British Columbia, the majority of the province is now opposed to fracking for natural gas. Opposition to new Liquefied Natural Gas (LNG) terminals shows that the conversation has changed dramatically since the last election.

It’s tempting to breathe a sigh of relief that discussion has finally moved on from, “is climate change happening?” to “what should we do about it?”

Unfortunately, the new brand of climate denial is far more worrying. Though climate policy is finally on its way, the tough decisions we need to catch up to the science aren’t being made.

For all the sunny rhetoric surrounding the Paris agreement and a new Canadian climate plan, our federal government is still pretending dirty fossil fuels have a future in a world where we meet our climate goals. They push for LNG terminals and tar sands pipelines as if these projects won’t propel us to a climate disaster.

Scientists tell us we must abandon fossil fuels as fast as possible to have any hope for a safe climate. Building new fossil fuel infrastructure in a climate crisis is like digging the hole we’re in – even deeper.

Our leaders perform verbal acrobatics to justify the continued expansion of the tar sands and the creation of a brand new polluting LNG industry. They fall over themselves to promote pipelines while paying lip service to renewable energy. At least the last government was unapologetic about its vision for a fossil fuel future.

If we had started tackling climate change 20 years ago when Dr. James Hansen, head of NASA at the time, brought global awareness to climate change maybe we would have time to gradually ease our economy into a low-carbon future.

However, Dr. Hansen tells us we have no more time to waste. He says we need to reduce global emissions by at least six per cent a year to avert climate catastrophe. Canada must lead the way by being as ambitious and responsible as possible. By definition that is outside the realm of business as usual.

The proposed Pacific Northwest LNG terminal at Lelu Island in British Columbia would have a bigger carbon footprint than all the vehicles, buildings and garbage disposal in one of Canada’s major urban centres – Metro Vancouver. That’s without even counting emissions when that gas is burned.

Oil from Kinder Morgan’s tar sands pipeline would emit carbon pollution equal to 13 per cent of our nation’s total emissions. Building more pipelines to expand the tar sands ignores the reality that Alberta’s dirty oil production must be “negligible” after 2020 for the world to meet its climate goals.

Climate change requires us to do far more than change our lightbulbs and drive electric cars. While Canadians work hard to reduce their emissions, one major fossil fuel export project can wipe all those efforts out.

The Paris agreement paints a vision for a world free of fossil fuels. Across the globe, countries are moving quickly to meet that challenge. India – with over a billion people – plans to have only electric cars on its roads by 2030. China just scrapped plans to build 200 coal plants. Even Saudi Arabia is preparing for a future without oil – in four years.

Yet all our leaders can talk about is getting tar sands to the coast as if nothing has changed. In a game of musical chairs, Canada remains obliviously dancing even though the music has stopped.