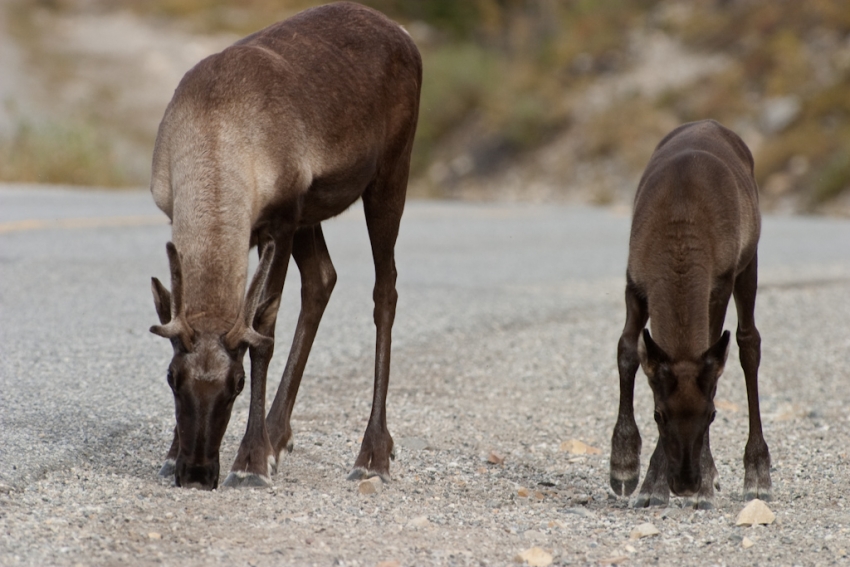 I believe that Premier Christy Clark is just going through the motions of protecting Mountain Caribou for public relations purposes. Carrie Saxifrage’s wonderfully detailed article of a few days ago shows how vulnerable these animals are, and how far advanced is their decline and, in my opinion, the trajectory to their inevitable disappearance. (If you haven’t read this wonderful piece, I strongly suggest that you do.)

Premier Clark refuses to protect them because they live where she wants to make money the old-fashioned way – by exploiting forests and mineral resources, allowing unlimited access for motorized recreation, and of course advancing her beloved fracking projects – always referred to euphemistically as Liquid Natural Gas or LNG.

Mountain caribou – most of them – are destined to join the dodo bird (gone), the passenger pigeon (gone), the buffalo (alive in remnant populations) and the present-day’s tens of thousands of lesser-known species which are being regionally extirpated or completely exterminated around the world as a result of human interference.

Picture the following scenario in your mind’s eye:

You’ve lived since birth in a very private, secluded home, near the top of a mountain, where your family has resided for many generations. You’ve never wanted to travel away, because this is a wonderful place of retreat. Over time, your family have become a bit like hermits – peaceable, happy, and very attached to their privacy. You can relax better here than anywhere else; it’s truly your one and only home. Your family has always had a garden, and a few chickens, and you’ve grown pretty much all the food you’ve needed, far away from crowds and noise. You rarely use your phone, you don’t link to the Internet. You don’t feel the need to do so.

One day a car unexpectedly drives up to your front door. Noisy strangers get out and knock, and then to your astonishment and dismay, more or less invite themselves in and sit in your living room, chatting away loudly among themselves; you understand that they’re moving in to the area. After a while they leave and get back in their vehicle – which has a broken muffler that shatters the peaceful silence. In a very short time you realize they’re actually building a home very near to your family’s, just a little downhill, on a separate property with beautiful forest cover where you’ve often hiked and wandered.

One day, as they’re building their large home, they knock down a garden shed you had built close to their house – they say it interferes with their view. Shocked and distressed, you call the police; they come, but say there’s nothing they can do.

A few months later one of your new neighbours’ big dogs mauls one of yours; they say nothing about it. Then a while later they cut down some of your fruit trees between your property and theirs – they just do it, without any explanation. When you remonstrate, they become aggressive and threatening. The police are called again, and they listen and take notes but do nothing. One of your children comes home after playing outside – he has a black eye and cuts and scrapes on his arms; sobbing, he says one of the boys in the new home beat him up. Again the police come, listen, and do nothing.

Over the next few years, more noisy, aggressive neighbours start to build next to the first. One of your pets is killed one night. You have no idea how it happened but you suspect one or theirs did it. No-one seems to care. Your neighbours are out regularly with chain saws cutting trees on their properties, holding parties late into the night, and treating you with indifference if you try and talk to them. If you complain to the police, they come but they take no action.

At last, you can’t stand it any more. You’re not a fighter. You don’t know how to change and start acting like your new neighbours – aggressive, self-possessed, indifferent to others, taking the law into your own hands. So you abandon the family home of many years, move further up the mountain and build a new, smaller home. But water higher up on the mountain is difficult to find, and less reliable. It’s nearly impossible to grow food in your garden; you can’t really produce enough to be self-sufficient any more. The noisy, troublesome dogs from down below have now killed all your chickens.

One day, you’ve had it. You pack up all your belongings and leave. It seems like dying, like the end of everything – you’ve lost your home, any feeling of security, hopes for the future. You feel like your life is over.

It’s impossible to extrapolate from the human experience to that of other species, but the basic experiences and reactions are probably very similar for all mammals (after all, we share 70% of our DNA with even the humble earthworm).

We all need a home, a place that feels secure, that has a sense of continuity and familiarity, that we understand pretty well, and that is not encroached on by hostile forces or living creatures that attack us.

So it is, I strongly suspect, with the mountain caribou. The relentless encroachment of humans on their habitat – their only home – is progressively destructive of their sense of security. They, unlike humans, cannot move away. They cannot reason out and rationalize what is happening to them, and come up with a comprehensive adaptation plan. They cannot tell us what they need; we have to study them to find that out through our observations – and we’ve only recently become interested in doing that.

So the caribou are simply condemned to die – through impaired breeding success, loss of food supply, constant energy-consuming stress, and of course predation from wolves – animals that never encroached on their home territory until we cut the low-level forest, and then some higher levels of old growth stands, opening them up for food that moose and deer, the regular prey of wolves could consume. As the moose and deer penetrate near or even into the home of the mountain caribou, the wolves follow, and inevitably begin to pick off the slower-moving, less adapted new prey.

The BC and Alberta governments know full well that the mountain caribou are being destroyed first and foremost by habitat loss, and by constant human incursion into what’s left. But like war-time leaders in previous eras, our elected leaders are at war with any environmental feature – animal or plant – that stands in the way of their carefully configured (if somewhat fantastical) financial juggernaut. In their hard-line calculus, with all but one caribou herd under immediate threat anyway, these annoyingly obstructionist creatures simply have to go.

The elected governments in BC and Alberta (backstopped, of course, by the ecologically primitive federal government), realize that appearing to be openly indifferent to the plight of the mountain caribou is politically risky. Even if they really see this iconic animal as a bothersome obstacle that blocks their plans for a resource extraction utopia, they know that they have to look like they're doing “the right thing”.

Since they have absolutely no intention of restricting fossil fuel extraction, wood harvesting or recreational industries unless absolutely compelled to do so, they disguise their callous attitude towards one iconic species with a parallel callousness towards another iconic animal – Canis lupus, the gray wolf.

It’s far easier for the public relations folks to openly condemn wolves to death, because the Eurocentric culture in which most settlers in North America are embedded has a long history of fear and loathing towards the wolf, which has even been tied into religious teachings.

Wolves have fascinated and frightened human beings since the beginning of time. Watch video about how wolves change the shape of rivers below.

In part this may be because they’re a bit like us. They live in families, to which they are deeply loyal. The hunt and live cooperatively. They are intelligent, playful and fiercely protective of their young. And they’re at the top of the bio-regional food chain, so they have a significant degree of self-possession – the look us straight in the eye, instead of cowering in fear.