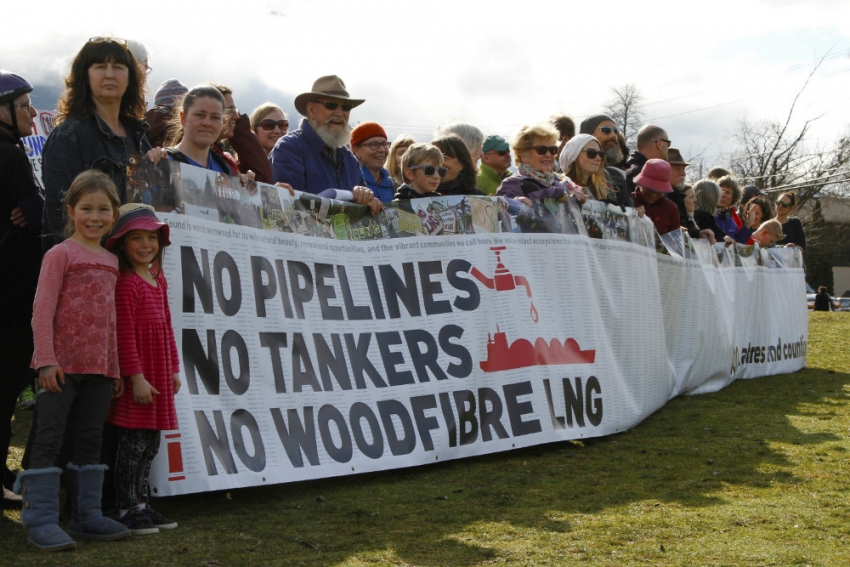 I cannot adequately express my anger, disappointment, and despair upon learning that you have given the green light for the proposed Woodfibre LNG project in Howe Sound, BC.

The West Coast is a long way from Ottawa, so perhaps you don't fully understand how the communities around Howe Sound have been fighting to stop this project over the last two years?

We have invited expert speakers to teach us about the potential impacts of this project locally, and how fracking impacts communities and First Nations in Northern B.C.

We have attended dozens of council meetings and open houses related to the project.

We have participated in five public comment periods in the last two years, reading more than 12,000 pages in 60 days as part of the BC Environmental Assessments for the Woodfibre LNG and associated FortisBC pipeline proposals, which were irresponsibly held at the same time.

We have submitted the most public comments for any provincial environmental assessment process, with more than 90% of submissions saying no to Woodfibre LNG.

Nearly 9,000 Howe Sound residents have signed the Howe Sound Declaration petition in opposition to Woodfibre LNG and its associated tankers and pipelines. Councils and Regional Districts around Howe Sound have all signalled strong opposition to the project through passed resolutions of Council. More than 200 volunteers have dedicated thousands of hours to stop this project, sacrificing careers, and personal time with family and friends.

Why are we so concerned? Credible and thoughtful experts have established that there will be significant negative environmental impacts if Woodfibre LNG proceeds.

This project will kill our recovering herring stocks, set back the recovery of Howe Sound that we have worked so hard to achieve over the past four and a half decades, pollute our air, impact our health and the health of our children, and endanger every citizen that lives along the LNG Supertanker route.

Not to mention the upstream impacts of fracking in northern BC, or that the total greenhouse gas emissions for this project from wellhead to burner tip directly contravenes Canada’s COP21 commitment to reduce GHG emissions.

Yet apparently you don’t seem to think there will be any adverse environmental impacts from Woodfibre LNG? You have not done your due diligence.

Instead, you relied on the weak Federal EA process that was gutted after the previous Harper government passed omnibus Bill C-38.

In your approval statement, you stated: “The federal government also carried out additional consultations with the public and Indigenous groups.”

How so? By giving us less than a week’s notice that we have yet another public comment period to go through with 21 days to review a highly questionable document compiled by the CEAA on upstream greenhouse gas emissions?

And then giving the project your official approval before staff at the CEAA could even upload all 1,300 comments to the website, let alone read them, or validate the scientific concerns we have raised about the CEAA’s dodgy greenhouse gas assessment. This is not meaningful public consultation.

You also state that “the Woodfibre LNG Project underwent a thorough, science-based environmental assessment that considered public and Indigenous input and views."

I counter that the provincial environmental assessment process has been a complete sham.

This stems from the fact that the provincial ministers responsible for issuing the BC Environmental Assessment Certificate have a conflict of interest as the BC Liberals have a mandate to develop LNG export facilities. This seriously undermines the integrity of the process.

And why the big rush? We were told by MP Jonathan Wilkinson that you had no deadline to make a decision on the Woodfibre LNG project. Meanwhile, you’ve granted a three-month extension on the Pacific Northwest LNG project proposed for Prince Rupert.

Why hasn’t Woodfibre LNG been granted the same amount of time to allow you to better engage with the communities around Howe Sound and fully understand the impacts of this project? Your rushed decision at best is uneducated and at worst grossly negligent.

As Justin Trudeau said “while governments grant permits for resource development, only communities can grant permission.”

Right now, the communities around Howe Sound are outraged. We will do whatever it takes to stop Woodfibre LNG.