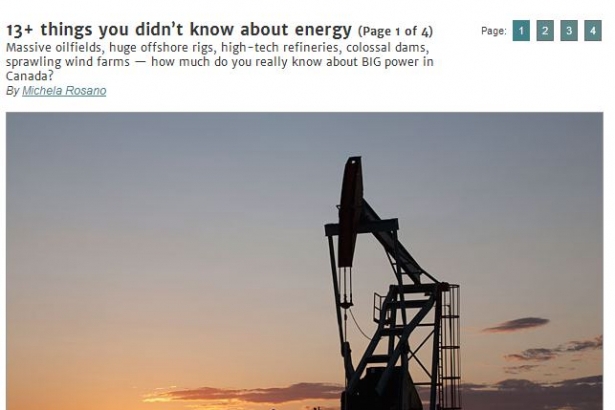 I was very interested to see the June, 2013 issue of Canadian Geographic (to which I have subscribed for years) centered on the theme of "Energy Matters". The subtitle, "13+ things you didn't know about energy in Canada" led me to believe initially that the article would be a broad look at all aspects of energy production and use in this country.

To my astonishment, I learned that the content of this article was strictly limited to enumerating the sites and magnitude of energy production in Canada. I was less astonished to see this narrow focus when I learned that the article had been partnered with the Canadian Association of Petroleum Producers.

But then, I learned that the Royal Canadian Geographical Society is being funded by the CAPP in its planned Energy IQ program to be distributed to children in schools throughout the country. In this program, an large amount of the phraseology is lifted straight from the public materials created by the fossil fuel industry.

On carefully reviewing the article on page 34 of the June issue of CG, the slant in favour of fossil fuel production was clear. For example, five out of seven illustrations, including the most dramatic and visually arresting initial one, are from the fossil fuel industry.

But it is what is left out that is most telling. There is no reference to government subsidies to the various energy industries, which in the case of the nuclear industry, for example are key to its survival. Most glaring of all, there is no reference to global warming, despite the fact that the climatological impacts of energy production are one of the key issues that is discussed in the public media these days. Whether intentionally or not, CG is being used as an extension of the public relations department of the CAPP.

To help me better understand how this could have come about, I would be grateful if you would let me know what financial arrangements have been established between the RCGS and the CAPP. In my profession, sponsored studies have been clearly shown to engender unmistakable bias.

Thank you very much for your attention to this matter.