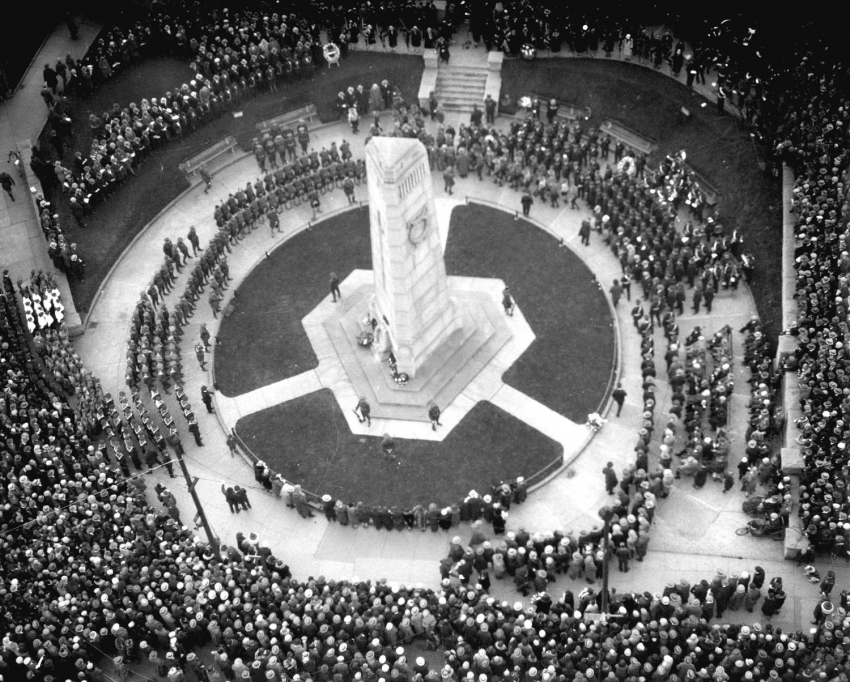 City of Vancouver archives. The cenotaph at Victory Square Park

"Yes, the long memory is the most radical idea in this country. It is the loss of that long memory which deprives our people of that connective flow of thoughts and events that clarifies our vision, not of where we're going, but where we want to go." Bruce "Utah" Phillips 1935 - 2008

In April of 1917, Canadian soldiers courageously and against the odds defeated the German 6, Army at the Battle of Vimy Ridge. It was the first time that all four largely volunteer divisions of the Canadian Expeditionary Force had fought together, and it has been cited as an important step in Canada’s history towards being recognized as an independent nation. It cost us 10,000 lives; many of them from the small but booming city of Vancouver.

Then again in the Second World War, Canadians endured unimaginable violence as they fought against the fascist dictatorships of Adolf Hitler and Benito Mussolini, and a nationalistic and aggressively imperialistic Japan. If we, and our allies, hadn’t won that war what kind of world would we be living in today?

So on November 15, don’t throw your vote away. It does a disservice to your self and to those who fought and died so that we might live in a safer, freer, democratic society.

You know, I moved here to be a Vancouverite. I couldn’t wait to drive my 1980 Chevette as fast as Chevrolet would let me (turns out to be a very shaky and unsafe-feeling 100 km/h) the hell out of  Kelowna, over the Coquihalla summit and down here. It’s the pull of the alpha city in our Province. I felt that pull from the age of 16.

In the 17 years that have passed since moving here I have sometimes been intensely proud and filled with hope as a Vancouverite, and at other times filled with frustration, embarrassment, and shame. I have fully invested myself financially, temporally, intellectually and emotionally in this city as the years have rolled on.

It takes effort to live here in Canada's most expensive city, in Canada's rainiest major city. To those who are concerned about affordability, housing, and our local economy, for those who are concerned about our city in an environmental and climate change context, in a social justice and inclusion context, or in a government transparency and political efficacy context, you too put in the effort to get by here 365 days a year.

If you put in that effort the 364 other days of the year to live, study, work or have your business in Vancouverite, I sincerely hope you put in the time for one day, to carve out some time and vote.

In today’s world it’s easy to see why so many of us have become cynical. Whether you feel the National Energy Board makes unfair decisions on energy projects, or you want to scream and bang your head on the table repeatedly every time Paul Calandra responds to questions in Parliament, I get it.

But I encourage you to see municipal politics in a different light. Whether you think the developers hold too much sway over Vancouver politics or not. More especially if you see this. And I want you to consider what it is that you can do about that. Voting, I hope will be, one of those options you consider. Maybe activism, maybe entrepreneurialism, maybe volunteerism, or maybe running for public office yourself.

And thinking back to Vimy Ridge, if you don't vote between now and November 15, what would you tell one of those soldiers who gave his life about why you didn’t?

And what do you think his response would be?

List of all registered candidates standing for election and their profiles:

Platforms and websites of all (or most) parties running in this election: