Voters will have lots of questions for candidates running in the VSB by-election. Here’s what the VSB’s longest-serving chair thinks the top issues will be. 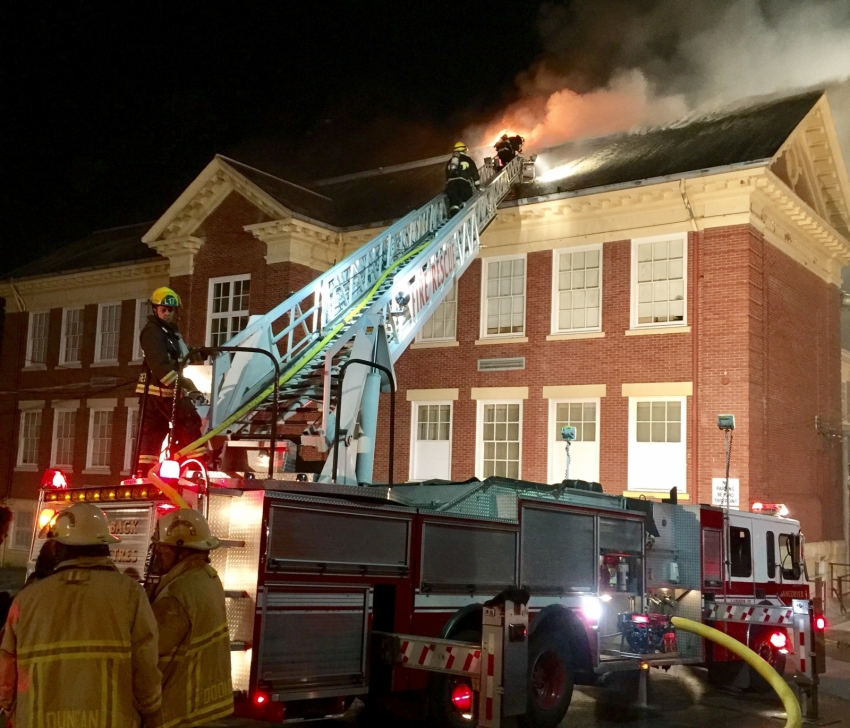 Flames shot through the roof of Carleton Elementary in East Vancouver last summer. Since then, the school's remained vacant and damaged. Voters in the Carleton neighbourhood will be asking VSB by-election candidates what they plan to do with the damaged school. Photo: Patti Bacchus

Vancouver voters are starting to get a better idea of whose names will be on the ballot in the October 14 Vancouver School Board (VSB) by-election.

The Coalition of Progressive Electors (COPE) has endorsed Diana Day as its sole school board candidate and One City Vancouver’s given the nod to public education advocate Carrie Bercic and parent Erica Jaaf.

The Vancouver Green party announced former trustee Janet Fraser will be joined by political newcomers Estrellita Gonzalez and Judy Zaichkowsky on the ballot.

Activist Jamie Lee Hamilton also announced she’ll be running for the school board. The Vancouver Non-Partisan Association (NPA) is expected to announce its VSB candidates at its September 6 nomination meeting.

The VSB seats have been vacant since the BC Liberal government fired the board last October after it refused to approve a budget that included staffing and program cuts and proposed a death blow to the popular elementary band and strings program.

The trustees were replaced by a BC Liberal government appointee — Dianne Turner — who approved the budget with its cuts and went on to pass a 2017/18 budget that controversially used funding earmarked to hire new teachers (in accordance with a government/BCTF memorandum of understanding following the BCTF’s Supreme Court of Canada win) to prevent more cuts by paying for teachers who were already on staff.

Turner also closed the district’s Main Street adult education centre (which was located at Gladstone Secondary, close to a SkyTrain station) in June despite the new government's promise to restore adult education funding that was cut by the BC Liberal government.

Now the new government's come through with its funding promise, Turner is standing firm on her closure decision, despite warnings from adult educators and students that it will make it difficult — or impossible — for many students who need the courses to access them.

The fired board voted to close adult education centres at the Britannia site, in the Downtown East Side and cut the youth program at the South Hill adult education site in a five-four vote a couple of years ago, with the NPA and Green Trustees voting for the closures and the Vision Vancouver trustees (including yours truly) voting against them.

Youth enrolment dropped significantly after that and overall all adult education numbers plunged too — as we warned they would.

Expect re-opening adult education centres to be a hot issue in the lead up the the by-election. Here’s what else I predict you’ll be hearing about.

With kids heading back to class next week and the VSB still scrambling to hire teachers to fill positions they must add to comply with restored collective agreement terms following the B.C. Teachers’ Federation (BCTF) win at the Supreme Court of Canada, I bet a lot of students and parents may be calling for the district to up its game in preparing for kids to get settled into classes and timetables in a timely way.

I recall some years when students were still having timetables adjusted in early October and if that happens this year, candidates will hear about it during the campaign.

After the previous board’s battles with government over closing schools, candidates will have to tell voters whether they’re for or against closing under-capacity neighbourhood schools. Last election the NPA candidates pledged they’d fight school closures only to refuse to support a moratorium on closures once they were elected, dismissing their election promise as a mere “aspirational goal.” Promises promises.

The slow pace of seismic upgrades will be on many voters’ minds, especially those who have kids in the dozens of VSB schools rated as high-risk of significant structural failure in an earthquake.

The new provincial government will be easier to work with on this file than Clark’s crew was, but the new board will face the challenge of tackling issues like temporary accommodation of students during their upgrades for major projects like Killarney and Point Grey Secondary schools.

In 2016 VSB staff proposed closing two of high schools (Gladstone and Britannia) and using those as temporary “swing” sites as a solution. The elected board suspended the process to decide whether or not to do that just before it was fired. Turner hasn't taken any action on this either, despite her promise last fall to accelerate the pace of upgrades.

Candidates are going to need to tell voters what they have planned to get these long-overdue seismic projects moving forward if they intend to oppose closing whole schools to make space. It's tricky stuff without simple solutions.

The BC Liberals’ foot dragging on capital funding for new schools in growing communities left several Vancouver neighbourhoods with more kids than school spaces and an urgent need to build new schools.