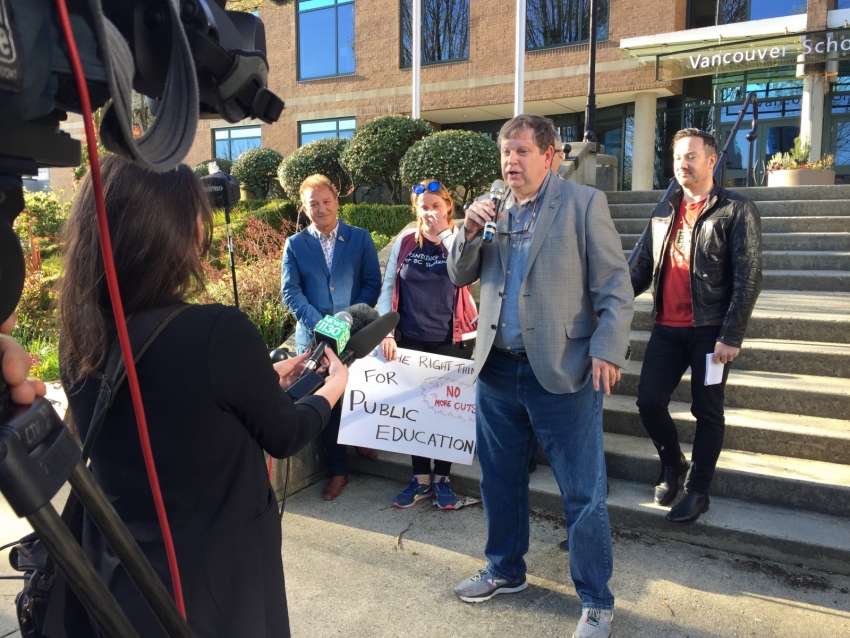 Christy Clark’s marathon battle with the B.C. Teachers’ Federation (BCTF), school closures and constant school board budget cuts define her government’s education record, but it’s important to consider what she and the B.C. Liberals did to post-secondary education too as we head to the polls May 9.

The biggest post-secondary issue in B.C. is crippling student debt, which is creating a crisis for young adults at a time they’re are struggling to start families, afford homes and start businesses, according to Dr. George Davison, the president of the Federation of Post-Secondary Educators of B.C.  (FPSE).

When the B.C. Liberals swept to power in 2001, post-secondary tuition fees in BC. totalled about $425 million, according to FPSE figures.

Davison says this year B.C. post-secondary students payed approximately $1.8 billion in tuition fees, which is over a 400 per-cent increase.

“Government has transferred the majority of the responsibility for funding post-secondary institutions from society to individual students and their families,” says Davison."

Governments used to provide funding for well over half the cost of post-secondary education, but now students are paying a much larger proportion, leading to what Davison calls a “government-created crisis.”

On average, tuition fees are up 220 per cent for individual students since the Liberals took office while government funding has actually decreased in real dollars.

FPSE says “getting the skills you need shouldn’t be a lifelong debt sentence” but for many students struggling to pay off debts that average $35,000 for four-year-programs with some of the highest student-loan interest rates in Canada, degrees and diplomas can take years to pay off — debt sentence indeed.

The post-secondary planks of the party platforms

Post-secondary education is required for most decent-paying jobs in B.C., unlike the good old days when there were abundant resource sector jobs you could get with just a high school diploma.

The B.C. Liberal government made it harder to get started for many by cutting funding for basic adult education courses students need just to apply for post-secondary programs.

Offered through school districts and colleges, these adult education courses enable people to get high school credits they’re missing for specific programs. In late 2014, then-education minister Peter Fassbender announced students who’d graduated anywhere in the world, at any time, would have to pay for their courses that had been fully funded.

With course fees set at $550 at the Vancouver School Board (VSB) adult education centres, that meant many people could no longer afford the courses they need to get into postsecondary.

Even if they got an “A” in a course in high school, if that was more than a few years ago, students may discover some programs require them to retake the course to meet “recency” requirements. In other cases, high school marks might not be high enough or in others they didn’t take the right courses they discover they need for post-secondary programs.

The BC NDP, which froze tuition fees last time it was in power, is promising interest-free student loans and a $1,000 completion grant for those who graduate from post-secondary programs and caps on fee increases.

That, along with its commitment to increasing the minimum wage to $15 — a boon to students trying to pay the bills along the way with part-time and summer jobs — will provide some real relief for cash-strapped students.

The BCGP promises “needs-based grants” and a “tax forgiveness” plan for up to five-years for qualifying students, along with creating a task force to look at making post-secondary more affordable.

The Green’s grants and tax forgiveness plans intrigue me and could be a boon for students struggling to pay tuition and for those burdened with student loans, but without eligibility and amount details it’s tough to assess them.