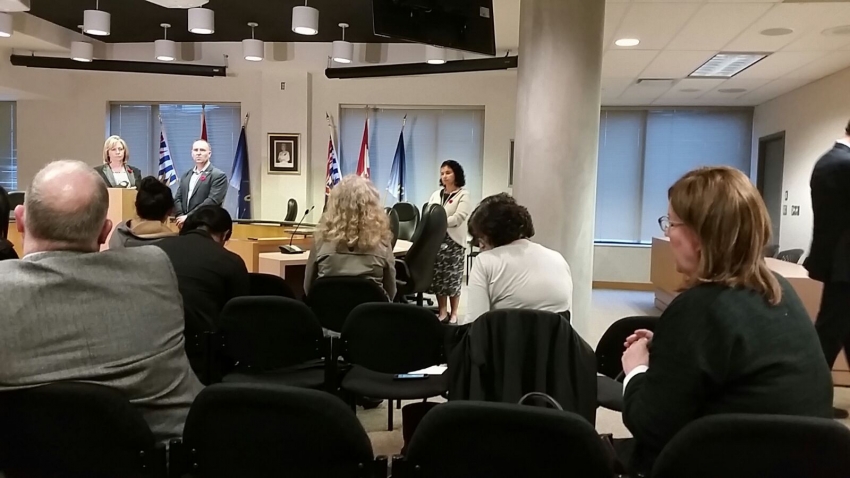 It’s been a long time since I attended a news conference as a reporter — a few decades actually. So I was pretty excited to get an advisory that Education Minister Mike Bernier and the VSB’s appointed trustee, Dianne Turner, were holding a “media availability to talk about the Vancouver Project Office” on Tuesday afternoon.

It felt a bit strange going back into the VSB boardroom where I’d served eight years at the table as an elected trustee and six of those as the board chair until the board’s firing on October 17.

I was hoping for some news and as I waited for Bernier and Turner I was trying to figure out just what kind of news they’d have that would merit calling a briefing like this.

As a board chair and trustee I’d worked hard to get the Vancouver Project Office (VPO) up and running. We’d asked for a dedicated office to handle the district’s dozens of seismic projects for years – bending the ears of several ministers — Margaret MacDiarmid, George Abbott, Don McRae and Peter Fassbender.

We finally got a deal with Fassbender in 2014 but it wasn’t the one we’d hoped for.

The Fassbender version of the VPO gave a lot of control over seismic planning to the Ministry of Education, leaving less room for community input into concept and project planning and pushing for the “lowest-cost options” regardless of whether that made long-term sense.

But we didn’t have much of a choice after Fassbender gave us an ultimatum in 2014 to do it his way or see Vancouver’s seismic upgrade funding spent elsewhere.

With all that history I was curious to hear the news at the Tuesday media briefing. But lo and behold, there wasn’t anything new to report. At all.

Now in my day, you didn’t call a bunch of busy media folks in for a newser unless you had some important news to share. I guess these days you can call one to say “hey, just wanted to let you know I’m doing the job I was hired to do.”

Because that was what Turner had to say. Well, in fairness she said she was going to be working on speeding up the seismic upgrade process by looking for innovative and creative ways to find “swing space” (temporary accommodation for students while their school is being upgraded). Just like the VSB has been doing for years.

Turner didn’t have any innovative or creative plans to share, but I asked her if she was considering split swing sites for secondary, using the example of using half of Britannia and half of Templeton for one secondary swing site — kind of a junior high and senior high arrangement that would mean neither of those schools would have to close, rather they would just each share their building with half of another school.

She said she was.

That’s one of the many options for housing students during their upgrades that doesn’t require closing entire schools and using them for swing sites. When the seismic upgrade program started, the Ministry of Education often funded portables for temporary accommodation.

Laura Secord Elementary students in Vancouver, for example, spent two years on their field in portables while their school building was completely rebuilt. Portables were also used for the Van Tech and Kitsilano seismic upgrades, while the work was done in phases and students moved through the school and portables.

The upside to that approach is that it keeps the school community intact and on site. The downside is it is disruptive, noisy, sometimes dirty and can slow the project down.

A better option, in my opinion, is be to build some brand new replacement schools on sites like John Oliver Secondary and use either the new or the old one as a swing site.

Once the district no longer needs an extra swing site school, the old one could be demolished. When the new Magee building was built they constructed the new one on the field and moved the students over when it was done.

The VSB did the same thing with schools like Kitchener, Douglas, Sexsmith and Dickens, demolishing the old ones when the new ones were completed.

An obvious downside to that, however, is that you either end up leaving kids in the old high-risk schools for longer while another school uses their new building, or you put the other school’s kids in your old high-risk buildings. Far from ideal or safe.

Several years ago the VSB asked the BC government for funding to build an Olympic Village school since we knew we’d eventually need it for local kids. The plan was to use it in the interim as a swing site.

It never got built and now the local kids need a school and it’s still not funded and there’s no sign of it coming any time soon.

While I enjoyed my first media event in my new role, here’s hoping next time there’s actual news and that’s it’s about actual progress on the long-delayed school seismic mitigation program.

One suggestion I hope Turner and Bernier consider is a return to providing portables where needed for swing space and building more replacement schools on sites with high-seismic risk schools. That will reduce the need for more creative swing space solutions and get more kids into safe schools more quickly.