Vancouver at a crossroads. 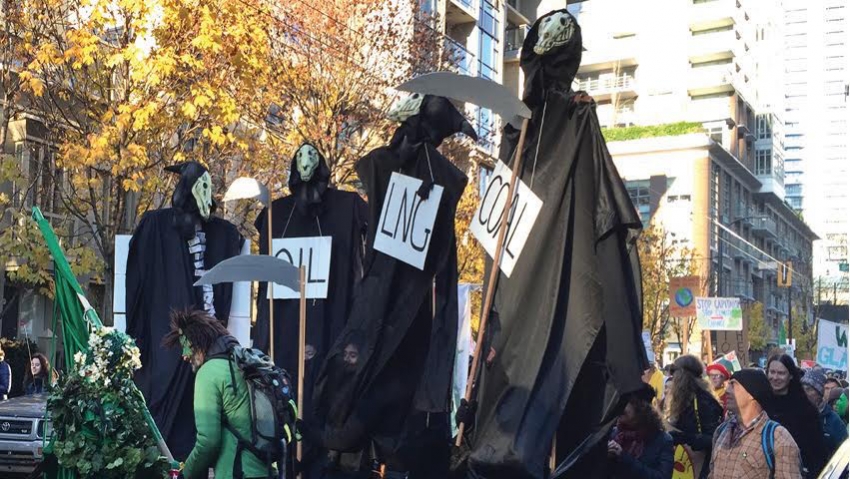 Metro Vancouver is at a crossroads in its history as competing visions fight for the city’s soul. One vision grows out from the city itself while the other seeks to impose itself from the outside.

The success of neither vision is inevitable but rather the outcome of a series of imminent political decisions by the Federal Government and citizens’ responses to those decisions.

In one direction is an aspiration of typically nature-worshipping Vancouverites to be the “world’s greenest city”. The other road involves the radical expansion of the Vancouver and Fraser River ports as hubs for fossil fuel exports.

In the era of the global climate emergency, of all-time historically low salmon runs and impending species extinctions, the city must choose one or the other of these diametrically opposed visions.

The global fossil fuel industry wants Vancouver’s ports. Approvals are moving ahead for a new coal export terminal for U.S. thermal coal on the Fraser River. As well, a new fracked gas processing facility in the river estuary is in the works.

To support these projects, planning is underway to build a taxpayer-funded multi-billion dollar bridge over the river to accommodate large tankers. There is also, of course, the Kinder Morgan pipeline and its terminus. The battle over this project, more than any other, represents the battle for the soul of Metro Vancouver.

Current exports from the city’s busy port include Canada’s lumber, wood chips, grains, pulses, potash, sulfur and manufactured goods -  Vancouver has certainly been doing its part in getting the nation’s resources to market. Coal goes out as well, as do relatively small amounts of oil.

The Federal Government has jurisdiction over the port with expansion approvals required from the appointed members at the Fraser Vancouver Port Authority. Like the NEB, this regulator has highly questionable ties to the fossil fuel industry.

Contrasting with this vision of Vancouver as a fossil fuel hub is the reality of an increasingly rapid global shift to a more green economy. In this vision the city supports renewable energy and high tech industries.

The creative arts (including film), tourism, agriculture, and sustainable resources flourish while the port continues to work. The city’s buildings are well insulated, airtight and achieve Passive House standards for energy consumption.

Walking, cycling and transit are supported. It is a city that restores its waterways, air and land rather than seeking to destroy them. In this vision, the old colonial model that steamrolls over First Nations is rejected in favour of collaborative partnerships. To move in this direction, which already has broad public support and an elected government mandate, the corporate capture of approval processes is not required.

By all accounts, the fix is in and Cabinet will approve Kinder Morgan just before Christmas near the December 19th deadline. Will this approval, a highly visible example of deceptive and fraudulent processes at work in Canada, be allowed to stand?

With the resignations of all three National Energy board reviewers, their findings are completely discredited. The Liberal government was elected on promises made and broken on NEB reform, community consent, credible environmental and climate reviews, and First Nations’ rights.

Despite a Liberal 'Yes' on Kinder Morgan, it seems inconceivable that Vancouver will surrender its soul easily.That the city that launched Greenpeace and helped set in motion a thousand environmental movements will accept pipeline construction with mere outrage is unlikely.

Vancouver is at a crossroads. Who wins the battles over Kinder Morgan and the other fossil fuel infrastructure projects in the coming months will determine if the city develops in line with an old and highly destructive colonial model, or genuinely embraces a forward looking and optimistic vision of sustainable development.

See more
OPINION: Why Liberal MPs in BC should resign if the Kinder Morgan pipeline is approved