It's hard to argue that menstrual blood is cosmetic, but the Conservatives can't decide if it is or isn't. 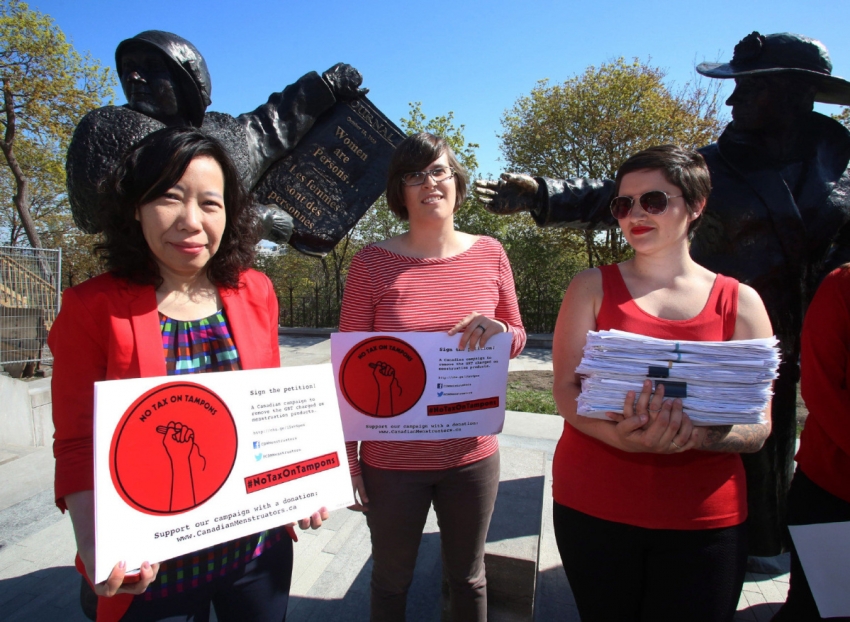 Advocates for the No Tax on Tampons campaign

The result is dissension in Conservative Party ranks.

Menstrual Products and the GST

Everyone’s talking about taxes on products to contain menstrual blood these days.

That’s because on Monday, May 11, the House of Commons reached a rare unanimous verdict. A motion from the NDP’s Irene Mathyssen demanded removal of the GST on “feminine hygiene products” (the euphemism for tampons and pads used to catch menstrual blood).

That much unanimity among Canada’s political leaders hasn't existed since MPs voted for their last pay raise.

If you’re a woman thinking about this development, you’re probably far ahead of most Canadian politicians. Do you consider the tampon or the pad you use to trap menstrual blood to be a luxury or cosmetic product, and therefore subject to the GST?

Putting it in other terms, would any of us consider it reasonable for a woman or a man with urinary incontinence to simply allow pee to run down his or her leg, and therefore consider a pad used to trap the urine to be a cosmetic product?

As Globe and Mail columnist Andre Picard said in an article back in March, “If you buy an eight-pack of Pizza Pockets they will not be taxed. But if you buy a 10-pack of Tampax tampons, they will be.”

The idea of dealing with menstruation as if it were a cosmetic matter is patently absurd. But those (mostly males) in charge of regulating affairs in this country haven’t always thought that way – and many still don’t.

The current Conservative government and its federal predecessors still think menstrual products are cosmetics and a luxury, and the provinces of Saskatchewan, Quebec, Prince Edward Island, Newfoundland and Labrador and New Brunswick all do as well. So they tax their sales.

The march towards removing luxury taxes from menstrual products has been going on for decades, spearheaded mostly by women and women’s groups, but with help from progressive males as well. But thanks to new a vigorous, broadly-based public advocacy campaign, it has recently heated up and moved into the mainstream where it belongs.

A petition on the Internet posted by Jill Plebiak, an accomplished non-partisan political advocate with an MA in Media Studies and a BA in Political Science and Sociology, has garnered over 73,000 signatures to date, calling for the removal of this anachronistic luxury tax.

NDP Irene Mathyssen introduced private member’s Bill C-282 in September, 2011 asking for the change, and has advocated tirelessly for this issue both before and since that date. This was the latest iteration of proposed legislation, which had been repeatedly proposed since 2004. But the Conservative government of Stephen Harper, more interested in ideologically-motivated tax-cutting, has ignored the issue completely.

But in the last few days, things have taken a very bizarre twist.

Trapped by Harperian rhetoric, dissent emerges in the PC rank and file

MP Kellie Leitch, a woman and a physician, and Stephen Harper’s choice for Minister for the Status of Women, has responded to this issue in the manner of a typical male partisan politician. 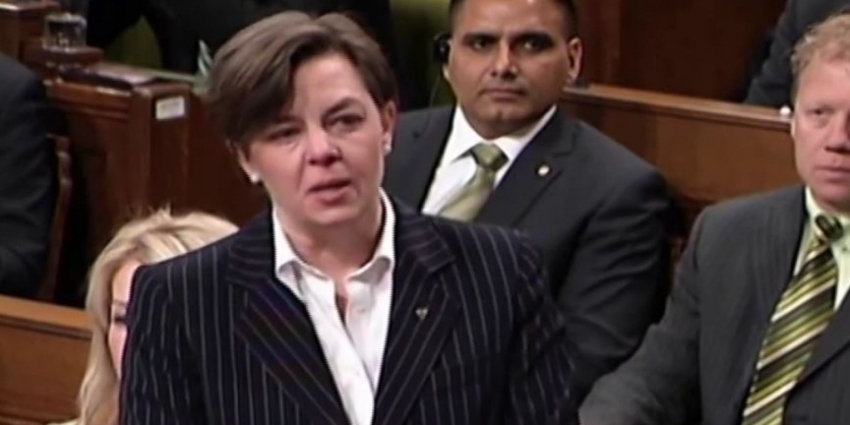 On May 12, she stood up in response to Mathyssen’s request for action on this issue and in two successive outbursts refused point-blank to address the issue.

Leitch refused to give a timeline. She refused to actually even refer to the issue by name. She just stonewalled and repeated her pre-assigned talking points, in the best Paul Calandra tradition.

But that’s not the end of the story. It was recently revealed that Harper and Leitch only agreed to support the unanimous motion to get rid of the GST on menstrual products after the entire body of women MPs in the Conservative Party threatened to stay away from the House of Commons for the vote.

Hardly. But it reveals that under the surface gloss of the hard-line, ideologically-driven rhetoric from the Prime Minister’s Office and the Conservative cabinet, an undercurrent of common sense exists as well as a deep feeling of solidarity among women – parliamentarians or otherwise – regardless of their partisan affiliation.

It’s now clear that Harper’s long-standing obsession with eliminating government revenue and services, coupled with his equally obsessive focus on fossil fuel extraction as the centerpiece of the Canadian economy, has suddenly been given a dangerous shove by the drop in oil prices.

The taxes on menstrual products brings in $36 million, a tiny part of the federal earnings, but nevertheless more than chump change. As Harper scrambles for every penny of revenue in order to lighten the blow caused by declining oil revenues, he’s faced with the dilemma: cut this tax out, or trivialize women’s biology.

I think this is a splendid opportunity for our Prime Minister, and his Minister for the Status of Women, to learn something about women’s bodies – something that they apparently didn’t know.

I trust they’ll come to regret it if they don’t.