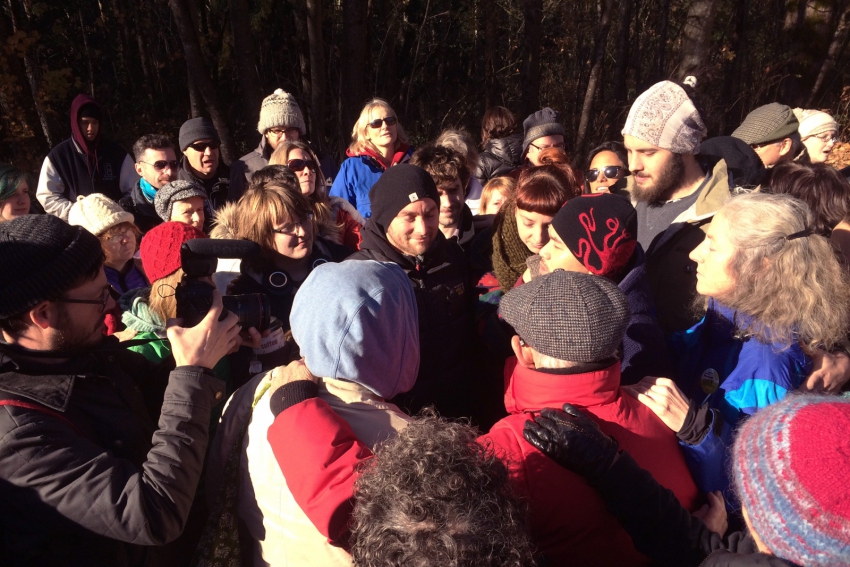 Eric Mathias at the center of a group meditation among Burnaby Mountain protesters on Friday morning. Photo by Mychaylo Prystupa.

Kinder Morgan's injunction against Burnaby Mountain protesters takes effect today at 4pm.  Many are contemplating their next move, anxiously.  Yoga studio owner Eric Mathias showed up on the mountain Friday morning, when news of the court order became known.  He was also featured in a new video instalment of "Directly Affected" - a new web series tracking the pipeline tensions.  What follows is that video, and Mathias's commentary.

Friday morning, Judge Cullen’s verdict on the Kinder Morgan injunction against Burnaby Mountain Protectors was announced to the crowd of 150 people.  I was there.  A palpable sadness and disappointment was present.

But what followed was unexpected and inspiring: an impromptu moment of peace-making in this non-hierarchical group of protectors.  People united in a circle of prayer.  We repeated a "hum" in a spiritual practice.

What came was a renewed sense of inspiration and commitment to continue with their purpose to protect the park, wildlife and the inlet. A beautiful picture was painted: “21st century protest”. How refreshing!

Especially considering that Kinder Morgan gained international headlines last week for a SLAPP suit on Burnaby Mountain protectors. The injunction which infringes both upon the Canadian constitution, and the Canadian Charter of Human Rights & Freedoms was followed in court by allegations that protestors were assaulting Kinder Morgan with their “angry” faces.

People around the world took to social media to showcase their own indignation that such an argument would be presented in court. Internet users posted pictures of themselves, children, pets, and inanimate objects containing what were supposed “faces of assault” and tagged these photos by the searchable hashtag “KMFace”.

The associated article, on a topic that over the past several months seemed to barely gain traction, was so popular that it almost crashed newspaper servers. What made the #KMFace meme so viral?  Were citizens placed in the shoes of the protectors? Did this bully tactic by a multi-national corporation hit too close to home? Was it the audacity of the claim that a facial expression could constitute assault? Was it a challenge to freedom of expression? Was it the realization that a corporation has greater rights than the people? Was it a safe outlet for anger? Whatever it was, it worked. It brought so many people intimately close, even for a few moments. It touched us.

I think with this online awareness people are realizing the land protectors are not protesting out of a sense of hatred toward people, companies, enterprise, or progress.

Love of people and planet

Rather, I think people are noticing that the protectors are standing up out of love for the people, and the earth on which we are mutually dependent. At a time when the scientific community, NASA, the United Nations, and grassroots organizations all over the world recognize the global issue of climate change, many people feel drawn to protect the Earth.

What is truly inspiring is that so many people have come together to support each other. People in this leaderless group are uniting in purpose, feeling valued, and supporting each other by providing food, engaging in eye opening conversations, reading and disseminating scientific literature, and boosting morale with hugs or songs.

I originally showed up out of a sense of anger, and what I felt to be a moral imperative, for the ways in which our government and private corporations are having what seems to be a free walk over land, municipal governments, the cities, and the people. When corporations have more power than cities and citizens, I feel frightened, and angry.

So, this anger that draws scores of people to the mountain, is a powerful and motivating force.

In your own life, if you take a moment to connect with something where anger arises, it gets you up off the couch, gets you moving; it mobilizes you to do something! But at the root of anger is love. The anger comes from a sense that something is unjust, for ourselves, other beings, and the planet, which are actually one and the same thing.

So, the protectors, knowing this, try to recognize when they feel angry; they’re stopping, they’re feeling their own anger, fully, and not acting until it passes. This way, the motivating energy of anger morphs into a response from a place of love in a way that is beneficial to all.

Acting from a place of love is far more productive. First Nations elders perhaps know this best. We can learn this lesson from our First Nations elders and become more solidly rooted in the source of anger rather than the anger itself. The anger not only burns people out, but it can act to push support away. Showing up rooted in calmness and holding our ground, a sense of power emerges and change happens.

Eric Mathias is a yoga studio owner with Moksha Yoga Burnaby.  He's also a former research scientist, and currently a "lover of Earth."