Lessons from the UK: why Canada needs proportional representation

The strange and unbalanced outcome in Britain shows the weakness of this old-fashioned system, increasingly abandoned by democracies worldwide.

The Labour Party lost 27 per cent of its popular vote in Scotland, but because the SNP was the only alternative party in that part of the world, that was enough to lose the Labour Party all of its seats to the SNP but one.

This is exactly what happened in Canada, of course, when in previous elections the Bloc Québecois (BQ) gained regional prominence in Québec. Despite having no strong interest in or connection to politics in the rest of Canada, the BQ gained a dominant number of seats because it was either the first or the second choice of most voters in that region of the country.

Not a single member of the Bloc Québecois was elected outside Québec.

All the way through the results tally in Britain, strange things turned up. For example, Sinn Fein, the Irish nationalist party, obtained 0.6 per cent of the vote, and yet elected four MPs – because of its regional strength in a few ridings near to Ireland. The Green Party, on the other hand, earned 3.8 per cent of the vote – over six times as many as Sinn Fein – but had only one solitary member elected.

This kind of distortion and misrepresentation will also happen in the Canadian federal election this fall, if we allow our politicians to be elected by this antiquated and ineffective voting system. Here's an example from a recent Canadian provincial election — in PEI; gone are the subtleties, and all the small parties. And wasted votes are everywhere. 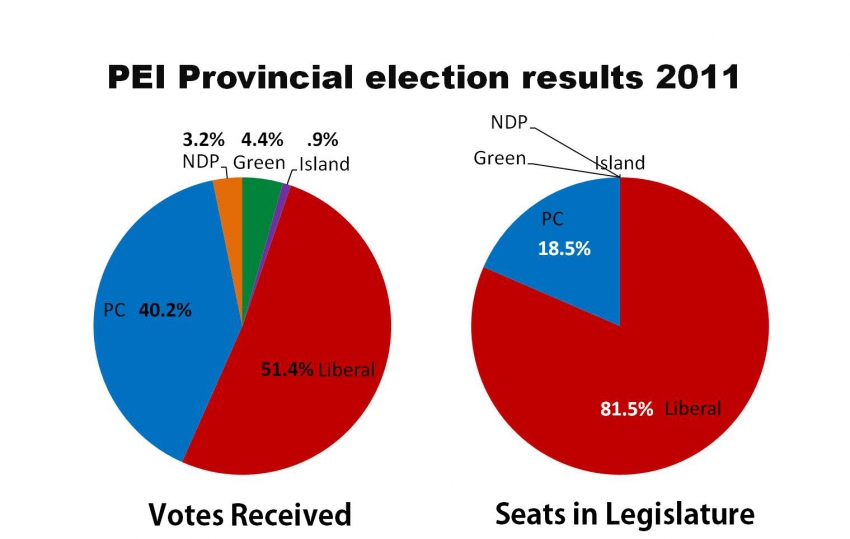 In fact, the current federal Conservative government is in power because a mere 24 per cent of eligible voters cast ballots in its favour.

1) if there are more than two political parties, it forces voters to pick a party that is likely to get in, rather than the party they would choose to vote for.

2) it favours regional strengths, giving disproportionate influence to parties dominant in a single part of the country, e.g. the Conservative Party in Alberta (although Rachel Notley may have influenced that province’s federal voting patterns!) or the Bloc Québecois in Québec.

3) it marginalizes people who don’t have the time or energy to vote, and breeds cynicism among their ranks e.g. the economically disadvantaged, First Nations, and youth.

4) it essentially eliminates political representation for minority concerns, or concerns that are widespread, but not well understood or immediate (e.g. global warming).

A proportional voting system will result in fairer representation across the political spectrum, more balance between regional influences, less marginalization of minorities, and better voter turnout (in New Zealand, turnout jumped almost 20 per cent once that country went from first-past-the-post to proportional voting).

So far, the NDP and the Green Party have all committed to bringing in proportional voting if they are elected. The Liberal Party has committed to starting a process leading towards a fairer voting system, including proportional representation.

Only the Conservative Party has said it will not support any change in the current voting system.

The non-partisan group Fair Vote Canada has called for a move towards proportional representation, so that the next election will be “the last unfair election” in the country.

Certainly the anomalous and unbalanced results of the election in the UK – coupled with the steady erosion of democracy in our country – make a very strong case for change. 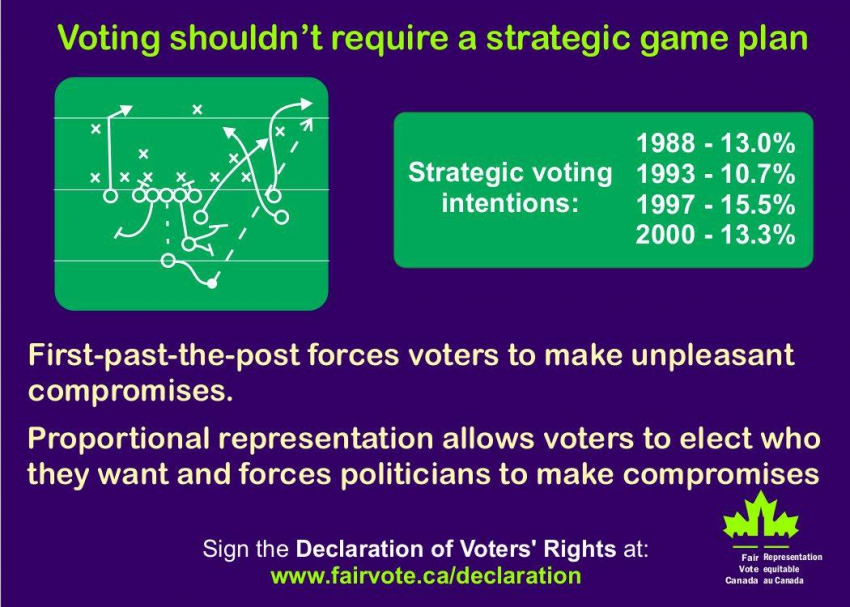