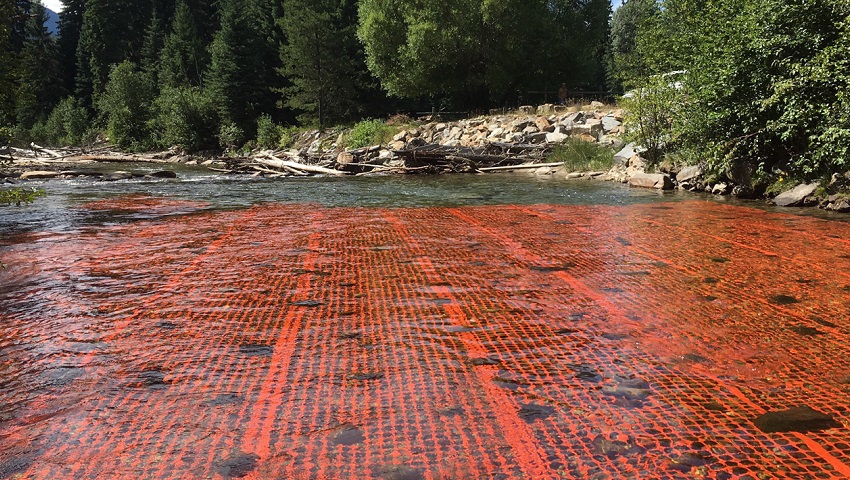 After swimming 1,300 kilometres upstream to their spawning grounds near the headwaters of the Fraser River, Chinook salmon returning to Swift Creek this year found their gravel beds blocked by a bright orange layer of snow fencing.

Kinder Morgan, the pipeline company that put it there, patted itself on the back for its “innovative” use of the deterrent mats, which prevent salmon from digging nests in the streambed to spawn. Of course, the only problem is it didn’t have permission to install them.

But the company went ahead with its plans, although it had not met its conditions, to start construction without the necessary permits. This reckless behaviour is shocking from a company asking for the public’s trust.

On Sept. 8 the National Energy Board (NEB) sent a letter to the Department of Fisheries and Oceans (DFO) asking for confirmation that this work, among other measures, would require authorization under the Fisheries Act. It noted Kinder Morgan’s plans, “could constitute serious harm.”

Kinder Morgan posted photos of Swift Creek lined with orange plastic even though DFO had not yet responded. If anybody else had gone into a major salmon-bearing stream and interfered with fish spawning, there would be absolute hell to pay. Violations of the Fisheries Actoften carry tens of thousands of dollars in fines but so far there’s been no penalty at all.

Are we supposed to just trust that Kinder Morgan knows what it’s doing? With dwindling salmon runs and starving killer whales, the company wants to use untested methods to prevent spawning in 26 streams along its pipeline route.

Thankfully, those plans were foiled by a concerned citizen, at least for now. Lynn Perrin, an Abbotsford resident and a director of PIPE UP, found the blog and complained to the NEB that Kinder Morgan had started construction without having met its conditions.

That led to a stern letter from the NEB ordering the company not to put any more mats down. But it did not require them to pull out the five which were already in place.

Now Kinder Morgan has asked the regulator to let its fumble slide, a classic tactic of begging forgiveness rather than asking permission. After thumbing its nose at the law by starting construction early and potentially violating the Fisheries Act, the company expects special treatment.

How entitled does a foreign corporation have to be to assume it can get away with this? Maybe the NEB used to take an “ask and it shall be granted” attitude to pipeline companies, but after years of outcry and scandal, the regulator is trying to prove it’s not in bed with industry. It cannot possibly allow Kinder Morgan to carry on as if it hadn’t just taken upon itself to waltz into critical salmon habitats and interrupt spawning.

Making an exception when the NEB failed to catch this activity in the first place would show how little has changed at the board. It’s not up to the public to discover that the company has started construction. That raises serious questions as to whether the regulator has the capacity to enforce its own conditions.

Why are these salmon deterrent mats even under consideration? There’s already a way to prevent damage to spawning salmon and their habitat, and it’s being used in elsewhere along the route. Kinder Morgan has the technology to drill underneath such critical streams — they’re just too cheap to use it.

Instead, company biologists have concocted this harebrained scheme with snow fencing to avoid having to work within windows of least risk to fish and therefore meet their aggressive construction schedule.

Already the company is whining the delays may interfere and even making threats to the NEB that it will have to harm fish if it doesn’t get its way. That’s obviously unacceptable and the NEB can refuse to allow it.

It’s only a few weeks into this company’s expansion plans and they’re already displaying a blatant disregard for the law of the land. Either Kinder Morgan is too incompetent to follow the rules or it just doesn’t care. Neither inspires much trust from the communities its pipeline puts at risk.

Peter McCartney is the Climate Campaigner at the Wilderness Committee