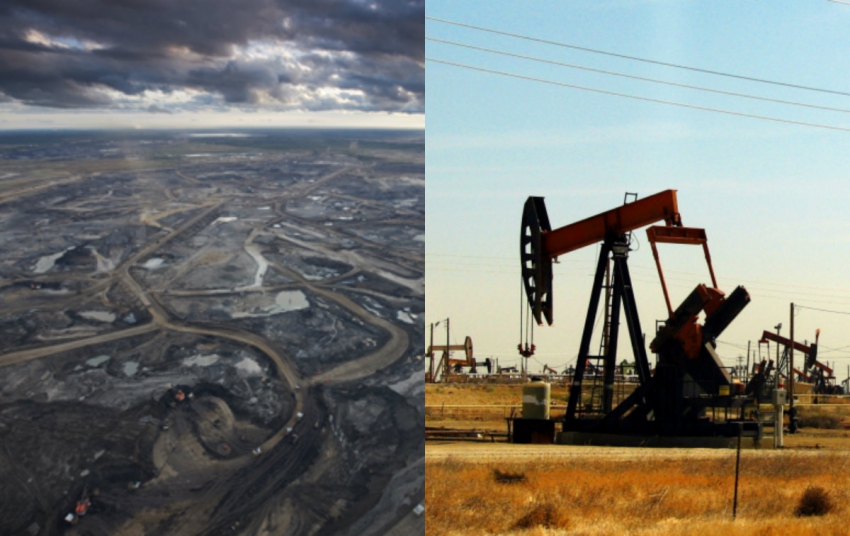 Photo by Elias Schewel (right) and CGP Grey via Flickr

Recent research published in the journal Nature details the locations and amounts of the world’s fossil fuel reserves that will need to remain unburned if we are to keep on a 2oC warming trajectory through the rest of the century. The findings should send a stark message to Canadian investors with holdings in high-cost, high-carbon assets like the oil sands. These reserves, which are the primary basis for assessing an oil company’s value, may never be taken out of the ground if global plans to address climate change bear fruit.

As a nation of pension investors, Canadians are not doing enough to demand that our pension savings are invested in a prudent manner that addresses national emissions targets, and encourages a shift away from high-risk, high-carbon companies into safer asset classes, such as public infrastructure, renewable energy, and clean tech, among others. A shift away from high-risk carbon intensive assets would be good for our economy. It would also contribute to the financial security of millions of pensioners across the country.

The assets managed by pension trustees (on behalf of their members, all of us) have grown exponentially over the past two decades. In the United States, total pension assets have reached more than CAD$22 trillion in value. In Canada, pensions hold more than $1.5 trilllion in assets, mostly invested in the shares of public companies.

Whilst the bulk of Canadian pension monies are managed nationally or by Ontario and Quebec pensions, BC pension trustees and their investment managers handle $124 billion of member assets. The Canadian Pension Plan Investment Board (CPPIB) alone is responsible for managing over $200 billion in assets, 13% of the national total. Much of this money is invested on behalf of pension members in the shares of Canada’s most prolific polluters, the same companies whose assets risk being “stranded” (worthless because they cannot be extracted and sold at a profit) under an extended low-cost oil scenario, in a world without government subsidies for hydrocarbon producers, or in an economy which prices carbon.

As a result of the massive shareholdings of our pension funds, they have a powerful market role to play in managing climate change risk, and must also manage systemic risks to their members’ money. Remember the sub-prime mortgage crisis of 2007? That was wilful blindness to systemic risk on the part of trustees and their investment managers.  Climate change and carbon re-pricing is just the type of systemic market risk that pension funds should be considering when deciding where to invest Canadians’ retirement savings.

Instead, Mark Wiseman, the head of the CPPIB, remains bullish on oil sands, and described his commitment to oil sands with simple two-part logic in a recent Bloomberg article:

“Part one, the world is consuming about 90 million barrels a day… Part two, God isn’t making any more.”

What Wiseman’s analysis ignores is the extremely high cost of extracting oil sands, the industry’s over-reliance on government subsidies and that many renewable energy companies, and infrastructure investments, would be far safer bets than high-cost oil sands for pension members.