If Stephen Harper believes in God, why is he indifferent to the environment? 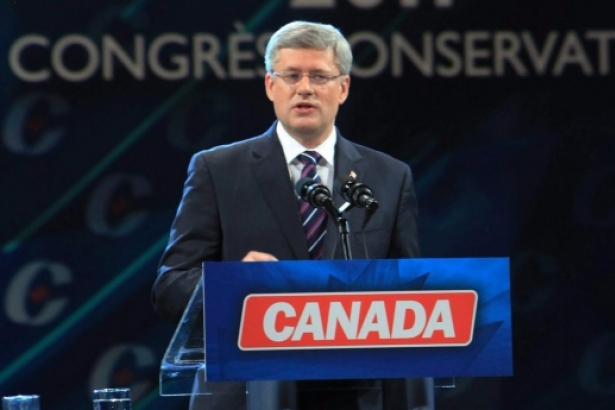 Stephen Harper speaking at the Conservative convention in 2011, just before attaining a majority government.

Hammer blows appear to be falling to environmental protection every few weeks in Canada, meted out by Prime Minister Stephen Harper and his inner circle.

On February 6, government announced that the Canada Revenue Agency would carry out aggressive new audits on seven of the leading environmental organizations in Canada – and no other non-profit bodies.

Then there's fish farms. The $26-million, 1,100-page Cohen Commission report, three years in the making, recommended a moratorium on new open net-cage fish farms. As if that none of that ever happened, Stephen Harper quietly opened the floodgates for a massive increase in fish farm installations in January.

A few months ago, Stephen Harper finally outlined the plans for destroying large swaths of research evidence contained in libraries belong to the federal Department of Fisheries and oceans. The dumpsters are filling now, and scavengers trucking away what they can scrounge.

What drives this incomprehensible war on the environment by the country’s political leader -- a war that has led William Rees, co-founder of the "ecological footprint" concept, to declare Stephen Harper guilty of "ecocide"?

Harper is a devout Christian. Many declared Christians would be astonished and dismayed by Harper's hostility toward environmental protection, because faith groups of all kinds, both inside and outside the Christian community, have been at the forefront of conservation efforts in every part of the world. The recently elected Pope Francis, among many others, has emphasized this spiritual responsibility.

When scientists have come forward to discuss environmental science they have been treated as fools and even described as “ treacherous” and “extremists”.