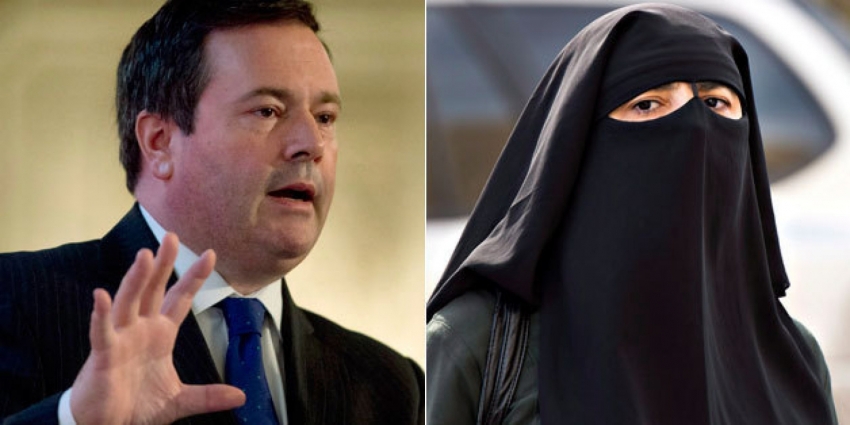 Xenophobia and racism are flourishing in Canada, under the influence of Stephen Harper’s rigid stance on Muslim women's headscarves.

Stephen Harper has told us that wearing the niqab, a scarf that veils the face except for the eyes, is “not how we do things here,” referring to Zunera Ishaq, a Pakistan-born Muslim mother of three, who wished to wear her head scarf when being sworn in as a Canadian citizen.

Ms. Ishaq has made it clear that she is entirely agreeable to showing her face to officials in private for purposes of confirming her identity and features. But she stated that she felt more comfortable donning her niqab during the public ceremony.

The Prime Minister is now planning to spend taxpayers' money appealing the Canadian Federal Court ruling that said that Ms. Ishaq has the right to wear this symbolic dress at the official swearing-in event.

Regardless of what one might think about this situation, one thing is clear. Stephen Harper’s unyielding, intolerant stance is actively stirring up xenophobic and even racist sentiments.

The evidence for this is quite easy to find. The section of the Conservative Party of Canada Facebook site addressing the niqab story is awash in racial and cultural prejudice, as well as anti-Muslim sentiment.

“Why should we always give up our way to accommodate strangers who supposedly left behind the barbaric cultures of their previous country but try to force us to live like they did before.”

“When one lives in a foreign country one MUST live by its rules and LAWS....otherwise 'GET THE HELL OUT AND GO HOME'"

“We need a national petition to ban this wear. IT IS A SAFETY ISSUE FOR CITIZENS”

“The time has come where we need to protect Canadian values! If you (immigrants) want to be a Canadian than [sic] you must respect our laws, our heritage and not attempt to bring the garbage that drove you from your own country!...If you cant accept then bye bye!!”

"The PM is right on. I'm glad he spoke his mind and said it how it really is. She doesn't like it, leave and do us all a favour. Funny thing is this witch has been in the paper three days in a row, are [sic] bloody veterans don't get that much coverage…”

You get the idea.

Many Conservative supporters appear to view all Muslims as potential terrorists. They see wearing a niqab as a subversive and provocative act, not a personal habit or cultural expression.

The Conservative Party launched an online petition asking supporters if they agree that "harmful and violent cultural practices found elsewhere in the world will not be tolerated in Canada."

The Prime Minister's Office then released a jingoistic installment of its 24 SEVEN YouTube video series titled, "Canada stands strong and free," in which the prime minister links the Ottawa 2014 shooting to the Charlie Hebdo massacre and ISIS. He suggests Canada is under threat from those who "despise modernity" and "want violence."

Soon after, Harper announced the anti- terror Bill C-51, stating that "our government understands that extreme jihadists have declared war on us," and that he will not "privilege the so-called rights of terrorists and others who would harm Canadians over the rights of law-abiding citizens."