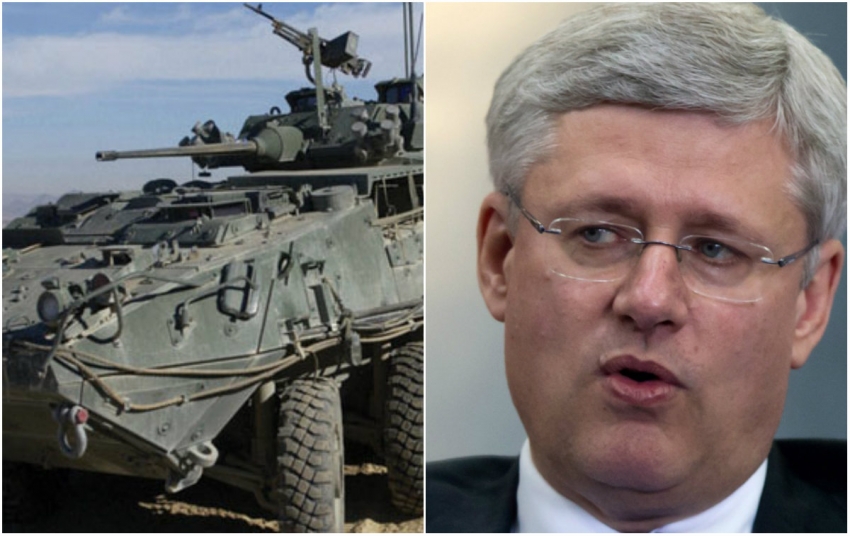 Only days before the murderous assault on Charlie Hébdo staff in Paris by heavily armed men claiming allegiance to Al Qaeda, Prime Minister Stephen Harper refused to support the global Arms Trade Treaty, which came into force on Christmas Eve, 90 days after the 50th nation ratified it.

While doing so, Harper also facilitated more Canadian arms sales this past year than previous governments have ever sanctioned – a $14.8 billion contract over 10 years to sell Light Armored Vehicles (LAV III) made in Ontario.   They are being assembled at a branch plant of US-based General Dynamics, the sixth largest arms manufacturer in the world, with sales of over $31 billion in 2012.

Canada’s weaponry is being sold to Saudi Arabia, the largest arms buyer in the Middle East. It is also the country that has funded the radicalization of Islam for over 40 years, and is the leading exponent of a rigid form of Islamism which preaches rejection of “infidels”.

Saudi Arabia is the country in the world where women cannot drive and where days ago a reporter who dared question the strict laws of the country was publicly flogged, fined (over $250,000) and imprisoned for 10 years.

Not only is Canada selling to the leading Islamist state, it is also selling to Bahrain, the United Arab Emirates, and even to Iraq, all countries with questionable human rights records. Canada is indiscriminately distributing arms right into the centre of the Middle East, arms which can easily end up in the hands of violent extremists. 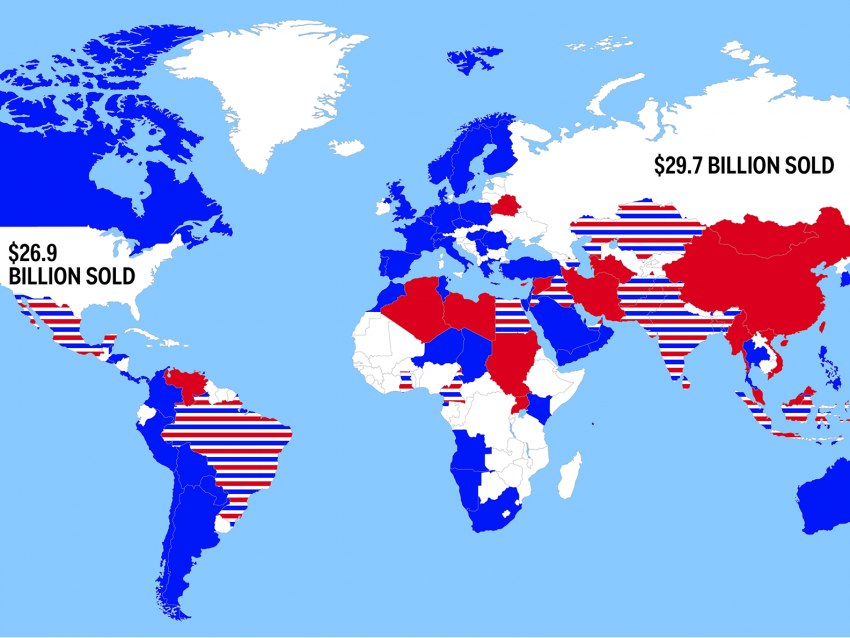 Map above from Wikipedia illustrates Global Arms Race and US-Russia arms sales: Red = Russian sales; blue = US, and red and blue bars mean both sell to that country.

When in the spotlight, Stephen Harper condemns the “international jihadist movement” and says Canada will do what it can to eliminate the threat embodied by this movement.

Yet out of the spotlight, he's selling of large amounts of weaponry to the very part of the world where he says this threat is coming from.

And the reasoning is purely amoral. As military journalist Dan Wasserby noted, after ending involvement in overseas wars, “many countries, including Canada, are looking to expand defence industry exports to offset reduced demand at home.”

It’s making money first and values second all the way – a few Canadian jobs (and presumably votes trump the widespread distribution of instruments of death and destruction.

These arms sales are directly powered by the Canadian government, through the Canadian Commercial Corporation (CCC). This agency, in the case of armaments, “promotes international defence procurement cooperation…Working as Prime Contractor, the Corporation stands behind every contract….thus ensuring a high success rate for projects involving CCC. We oversee all contracts from start to finish.”

The Middle East – like most of the world – is already awash in weaponry, thanks to massive sales volumes from the US and Russia and lesser volumes from European nations, China, and just about every other country in the world.

Each country produced over $30 billion in weaponry, although sales earnings are far greater, with the US selling to many more countries than Russia, but Russia selling a higher total volume than its rival.

And inevitably, some of this tsunami of weaponry has found its way into the hands of the very people Stephen Harper rails against – the Islamic State of Iraq and Syria, or ISIS. US-made weapons figure clearly among them. There’s no evidence that Canadian weapons won’t do so, too.

The violent assaults in and outside Paris are symptoms of a militaristic, violent malaise that grips the world, fuelled, among other things, by a relentless flow of lethal firepower that leaves the entire human community awash in fear and anger, shredding our aspirations for peace to ribbons.

Our Prime Minister is in the thick of it, sparking the tension with sometimes inflammatory rhetoric and war-like condemnation of the “bad guys”. Meanwhile, his policies only accelerate the distribution of weapons to those same countries and cultures he rejects.

Actress Meryl Streep, in London for the screening of a new movie, was asked for her reaction to the killings at Charlie Hébdo. She said: “Terrible…overwhelmingly sad…sad. But the antidote to that is to live joyously, tolerantly…” She paused, before adding: “And with attention.”