VO Contributing Education Editor Patti Bacchus on why the NDP and Green party power-sharing agreement is a best-case scenario for B.C.’s public schools 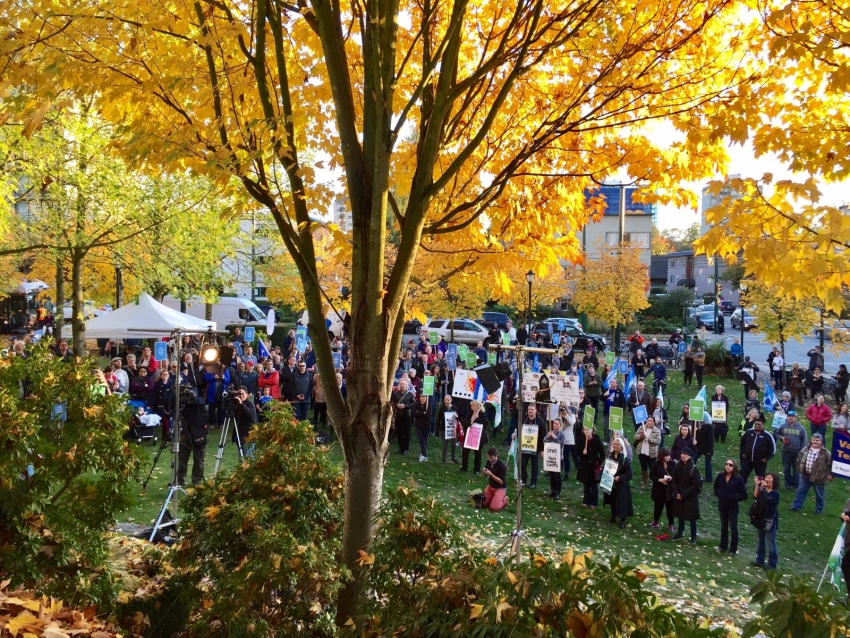 Supporters of the elected trustees gather on the lawn of the Vancouver School Board last fall to protest the B.C. Liberals' firing of the board. The NDP/Green agreement means Vancouver will have an elected school board again. Photo: Patti Bacchus

I heard the news about the Green and the NDP power-sharing agreement on Monday just as I boarded a flight to Europe without any wifi. That gave me several uninterrupted hours to think through what this historic situation could mean for public education, after struggling and straining for so many years under B.C. Liberal rule.

I’m writing this column as I sit at a desk in Copenhagen with a beautiful lake view. Denmark is governed by a multiparty system and its education system has many parallels to B.C.’s. The Danish parliament is made up of nine political parties elected through proportional representation and minority governments are pretty much the norm. It seems to work well and the standard of living here is impressive.

It’s an interesting context in which to think and write about what’s happening in B.C. politics and its implications for public education.

My conclusion: the dark days of the B.C. Liberals' war on public education are over. After so many years of bleak financial news for public schools, it’s hard to get my head around the idea. But it’s true.

The long, dark, stormy night is over and a new day is dawning for B.C.'s public education system. It won’t help the hundreds of thousands of kids like mine who were part of the generation who went through school under B.C. Liberal governments, but it bodes well for present and future students.

It will come as a tremendous relief to educators working in the system, except for the ones who left out of exhaustion and frustration. Other teachers will be happy going forward but will be sad for the hundreds of students they saw shortchanged over the past 16 years.

Best-case scenario. If it holds together

The outcome of this very unusual provincial election is a best-case scenario for public schools — more than I dared hope for, to be honest. As long as it holds, and that’s still a question that will hang in the air. It’s razor thin and fragile and we could still be in for a lot of surprises.

Before this crazy election, I figured the best way to improve public education was to vote NDP and persuade would-be Green voters to do the same. Like many progressives, I figured votes for the Greens would just help the Liberals win another majority. Boy, was I wrong and I couldn’t be happier about it.

How good is it this historic situation? Take a look at the B.C. NDP and B.C. Green party education platforms.

The NDP’s is good but the Green’s is even stronger when it comes to education spending commitments, including big promises for increasing K-12 funding —$250 million for 2017/18 up to $1.46 billion for 2020/21, plus $10 million for adult education (high-school) courses.

The Greens also pledged $35 million for food and activity programs and a review the overall funding formula, something the NDP included too.