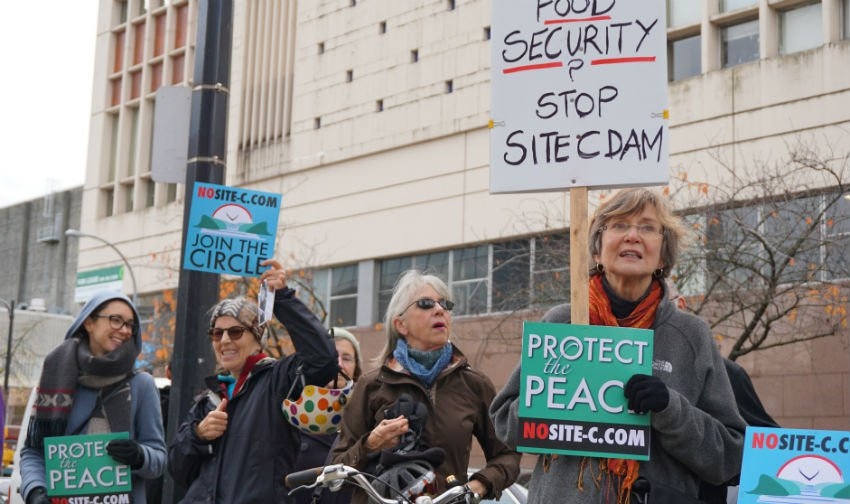 We are writing because you have been called upon to provide recommendations on climate action to the provincial government by the end of this month, when Premier Christy Clark is scheduled to travel to Paris to attend international climate change talks. We are collectively advising you that the proposed Site C hydroelectric dam project is not 'clean energy' and to remind you that Treaty 8 First Nations continue to oppose Site C, and we are calling on you to oppose the Site C project with us.

Your primary task is to advocate the “best actions” that British Columbia can take to keep the province on track in reducing greenhouse gas emissions. But you have also been told that the recommendations you make should serve to improve relations between the provincial government and First Nations, not weaken or undermine them. This is a vital part of your mandate, and it cannot and must not be ignored.

All too often, provincial and federal government actions have caused harm to First Nations. There is a grave risk that if you, as committee members, are not careful you will legitimize climate actions that amount to an assault on constitutionally protected Aboriginal Title and Rights and Treaty Rights.

We are extremely concerned that a cornerstone of the province’s emerging and allegedly “clean energy” climate plans includes construction of the Site C dam, which would flood land along 107 kilometers of the Peace River and its tributaries. This would result in the permanent loss of vital hunting, fishing and gathering sites and other areas that are of historic and cultural importance to the region’s First Nations, who actively oppose the dam’s construction.

Further underscoring our concerns is a discussion paper on climate action that was released in July by the provincial government and reviewed by members of your committee. The paper makes no mention of Site C. Because it fails to do so, there is no discussion about what uses the hydroelectric power from that dam might be put to. Our concern is that a substantial amount of that power could be used to support expanded natural gas drilling and hydraulic fracking operations on First Nations lands, which could then result in the construction of new Liquefied Natural Gas processing plants on our coast.

If as committee members you are not already aware, you should know that First Nations in the Peace River region of the province have expressed grave concerns about the impacts that expanded natural gas drilling and fracking operations have had and will continue to have on critically important wildlife and water resources. Those concerns have recently resulted in successful arguments before provincial tribunals and courts opposing water and other resource allocations to energy companies involved in fracking operations.  Further, the Union of B.C. Indian Chiefs, First Nations Summit, and B.C. Assembly of First Nations have all passed resolutions supporting Treaty 8 First Nations in opposition to Site C.

In May, 2015, when Premier Clark appointed you as members to the Climate Leadership Team you were tasked with making recommendations that “further the province’s government-to-government relationships with First Nations while constructively finding climate solutions.”  You will fail to meet your own mandate if you do not publicly and forcefully oppose the Site C dam and any expansion in natural gas drilling and fracking operations that would be made possible by increased availability of hydroelectric power. We formally request that you speak publicly on this issue prior to the Paris climate change talks, and underscore the importance of BC working directly on a government-to-government basis with First Nations.

Substantial progress in meeting our climate change goals is something we all strive for. But true progress cannot be made in the absence of strengthened relationships between B.C .and First Nations. That is the path to truly meaningful, socially responsible climate change policies.