The results of a recent by-election are being contested after an Osoyoos school trustee resigned her seat. More fallout from Christy Clark's long war on public education? 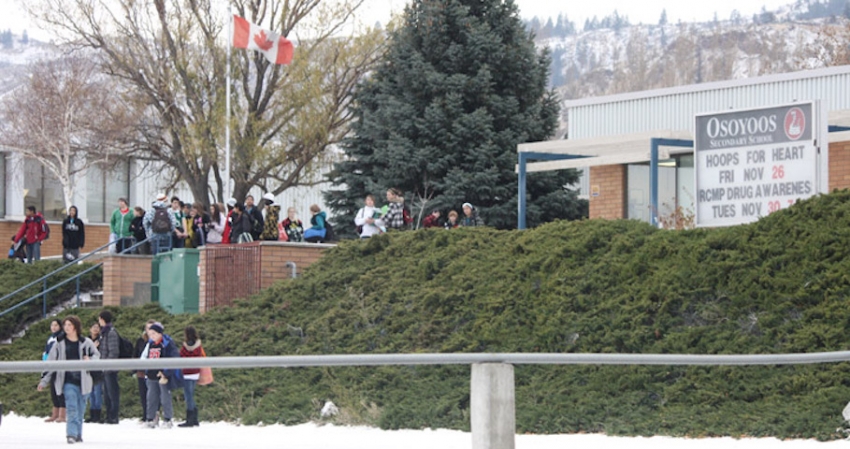 School trustees voted to close Osoyoos' only high school after a bitter and divisive closure process only to overturn that decision after Premier Christy Clark showed up with some funding at the 11th hour. Photo: Wikipedia

We’re lucky nothing on this side of the border compares with the fireworks over election results like we’re seeing in the US, but there is a bit of a current dustup following a recent school board by-election in Osoyoos.

School board by-elections don’t usually draw a lot of attention — or votes — but this one is relevant and worth noting in the current provincial pre-election context.

As we see public education shaping up to be a key issue in the May 2017 provincial election, it’s important to take a moment to consider what’s been unfolding since the B.C. Liberals took power in 2001 and appointed Christy Clark as Education Minister.

To say Clark left a mark on the education ministry would be an understatement. She took a wrecking ball to the teachers’ contract in 2002 and created a dispute that was only somewhat settled with this month’s quick decision in the teachers’ favour at the Supreme Court of Canada, following a long, long battle. That’s a helluva mark and it doesn’t end there. Clark’s left collateral damage scattered all over B.C.

Education Minister Mike Bernier and B.C. Teachers Federation (BCTF) leaders meet this week to start working out how the government plans to put Humpty — our public schools — back together again after years of staffing, program and resource cuts and hundreds of school closures.

It won’t be easy and it won’t be cheap. And it sure as heck won’t be in time for the thousands of students who were shortchanged by larger and more complex class sizes and fewer specialist teachers and services than they deserved while this case worked its way through the court system.

So what does all this have to do with the Osoyoos by-election?

Stripping the BCTF contract enabled government to put the squeeze on school boards to reduce and limit spending so the B.C. Liberals could cut taxes and meet their budget targets. School boards all over B.C. have struggled with chronic budget shortfalls ever since and many succumbed to pressure to close schools to save a few more bucks to balance their inadequate budgets.

Secret cabinet documents obtained in 2002 by The Province’s Michael Smyth and explained in his column laid out the sordid details of how government plotted to do this and guess whose fingerprints are all over it? The one and only Christy Clark’s. Thank you to the Tyee’s Katie Hyslop for digging that column up and posting it to remind us about it.

School closures are the hardest things school boards have to do

One of the many things I learned in my eight years as an elected school trustee is that if you talk to enough long-time trustees you’ll discover there is nothing harder than closing schools. The message is often the same —  schools are the hearts and souls of their neighbourhoods and closing them tears apart communities.

While we only closed one small school during my time on the VSB, we explored closing several more and even going that far was pretty brutal and highly controversial.

Which makes me empathize with former Okanagan Similkameen School Board trustee June Harrington who resigned from her post in July after a long and emotional process to decide to close Osoyoos’s only high school, only to have the decision reversed after an eleventh-hour intervention by the Premier who rode to the rescue with enough “rural schools” funding that suddenly came available to keep the school open.

Now imagine you’re Harrington (whom I’ve never met). I can. After being the sole trustee on her board to consistently oppose closing her community’s only high school, and going through months of gut-wrenching controversy and conflict, I imagine she’d had enough of working under the kind of pressure the Christy Clark government has put on school boards.

I haven’t been through the full process she went through but I had enough of a taste of it to feel the urge to quit more than once. What always stopped me was knowing it would trigger a by-election, which can be costly in a city the size of Vancouver and probably annoying for voters. And I’d made a commitment to serve my full term, tough or not.

But if I’d been through what Harrington did — her board’s heart-wrenching decision to close her town’s only high school due to the B.C. Liberals' dismal education funding decisions — only to have that all turned upside down at the last minute by a Premier in election mode, I’d probably be ready to pack it up too.