The word “additional” appears nine times in a 253-word VSB statement announcing the first round of teacher hiring. But are they actually additional or just a down payment on what's owed? 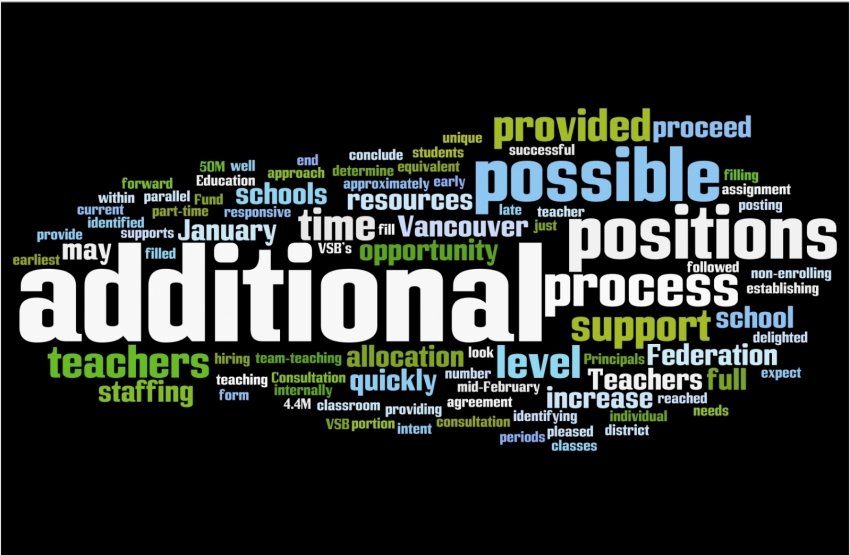 A word cloud version of the Vancouver School Board's statement this week regarding the restoration of some of the teaching positions that were cut as a result of the B.C. government's 2002 BCTF contract stripping.

In a written statement this week the Vancouver School Board (VSB) says it’s “delighted” to have “additional resources” in the form of  95 full-time teaching positions it’s restoring due to the B.C. Teachers’ Federation (BCTF) Supreme Court of Canada win.

It’s great news to see some of the previously cut teaching positions starting to be restored after so many years of cuts. The court found in November that the government acted unconstitutionally in 2002 by stripping the teachers’ contract which led to thousands of teaching positions being cut from B.C. public schools.

Having made the difficult decision to vote for some of these cuts in my eight years as a Vancouver school trustee, and then getting fired for refusing to make more of them, I’m relieved they are starting to be reversed.

However, I was taken aback that Acting VSB Superintendent John Lewis used the word “additional” nine times in his 253-word statement.

In fairness to Lewis, the positions are in addition to current staffing levels but to me they’re actually a small down payment on a long-outstanding debt to B.C. kids.

That’s because the VSB’s $4.4 million-dollar piece of the $50 million pie being divided up among school districts — as the government’s first step in response to its stunning loss at the Supreme Court of Canada — is just a fraction of what’s been cut from Vancouver schools since the B.C. Liberals have been in government.

To put Lewis’s “additional” teaching positions in perspective we need to look back 15 years. 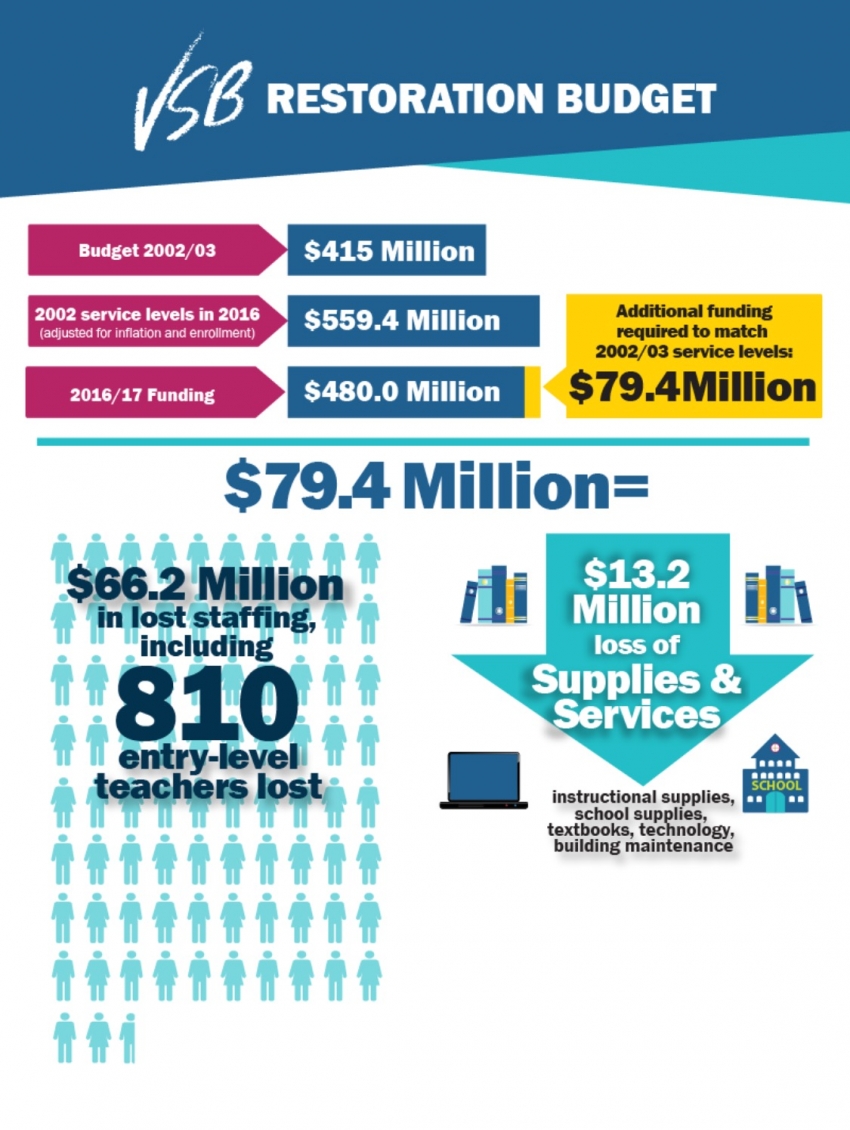 This Vancouver School Board infographic highlights how much it would take to restore staffing, services and resources to the equivalent level provided when the BC Liberals first came to power.

As a former VSB Chair who wrote or signed off on many statements and news releases, I would have chosen my words more carefully to provide context. After all, those positions are just a partial restoration of what students were robbed of for 15 years.

However, I was elected and Lewis is a government appointee, and it may be that he’s just doing his part to carry the government’s message, hoping voters forget the past and give the Christy Clark government credit for the “additional” teaching positions.

(Lewis also oddly capitalizes “principals” in his statement, although he uses lowercase for teachers: “Consultation will proceed at the school level (between Principals and teachers) and will then be followed by district level consultation…”  his statement says. It’s hard to know what that’s supposed to convey but I doubt a seasoned superintendent would do that accidentally.)

The BCTF deserves credit and thanks for fighting and winning this long and difficult battle through the courts in the face of pressure to give up and give in.

Students will benefit from having those teaching positions back and teachers’ increasingly heavy workloads will likely begin to improve.

But as we head into a provincial election in May, it’s important to remember what’s being put back this year is just part of what government stole from B.C.’s public school students for the last 15 years and that they’re only doing it because they have to.

And the thousands of kids who’ve left the system over the past few years will never get back what the B.C. Liberal government took from them.

B.C. Education Minister Mike Bernier left some important things out of his year-end wrap up