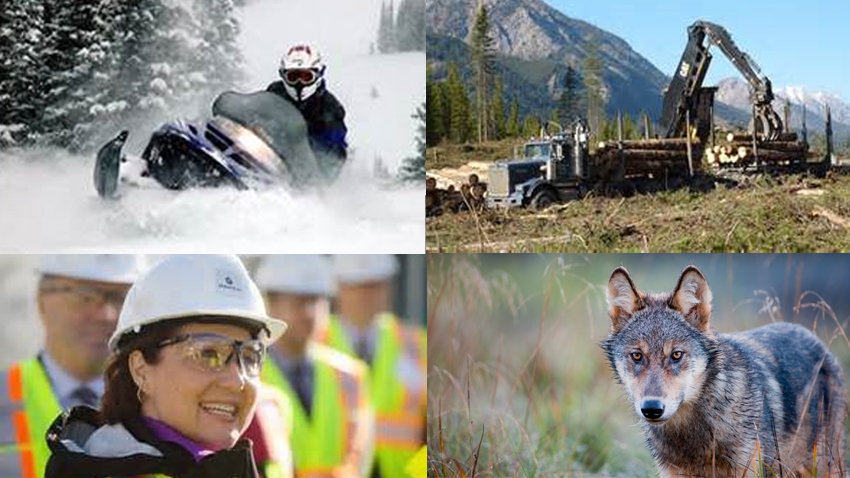 Photo of wolf by Ian McAllister

In B.C.'s Selkirk Mountains, where the province began an organized kill of a 20-wolf pack in late January, the caribou population has declined from 46 caribou in 2009 to 18 in 2014.

In the Southern Peace, the other area targeted for a wolf kill, about 950 caribou in six herds remain. One herd has gone extinct in recent years. Five have less than 50 animals. Only one herd, with 705 animals, is large enough to be considered viable over the long term.

According to experts, a population of 75-100 animals is the minimum that is able to withstand fluctuations while the causes of decline are investigated.

The provincial Ministry of Environment’s most recent Science Update for the South Peace region predicts that increasing industrial activity will result in a 75% decline in caribou herds over the next 10 years. That would leave less than 300 animals.

Scott McNay, Ph.D ecologist and member of the Science Team for BC’s Caribou Recovery Plan, told the Vancouver Observer regarding the ongoing wolf kill: “It’s not simply a 'wolves as scapegoat' issue,' rather it is a 'do we want caribou as a species to exist' issue."

"The decline is rapid and caribou are facing extirpation in many herd areas, in only a matter of a few years in some places," McNay continued. "We need to stop the bleeding and address the underlying problem, which began with disturbances in lower-elevation forests. The 2009 Caribou Recovery Plan provided insufficient protection."

"Citizens need to think hard about both sides of the issue and take the time to fully understand all that is at stake.”

Like this kind of reporting? Back The National Observer on Kickstarter.

Extirpation— local extinction— is now a very real threat to caribou, aka reindeer, who have thrived in BC’s mountains by way of sheer avoidance. For millennia they foraged for their existence on food no one else wants, in places that no other large mammals, human or otherwise, lived.

You can picture them, even if you've never seen them: six reindeer with big racks meandering onto an alpine ridge. They push aside the snow using their large, soft hooves, nibbling at the black lichens that curl up from the rock like kale chips. Others in their herd stay in the treed areas below, yanking down the black and pale green lichens that hang like hair from trees on the gentle slopes.

They’re the only big mammal around. For millennia they have munched their lichens in lofty havens in areas like the Selkirks and the Southern Peace, relatively free from competition and predators. Other caribou exist in other habitats, but the habits of these mountain caribou, Rangifer tarandus caribou, make them unique in the world.

Such a scene would have been much more widespread one hundred years ago. In the 21st century, the low-elevation old growth forests that stood between the caribou's winter habitat and the rest of the world have been substantially logged. The caribou dislike the dense new growth but the other ungulates, deer, elk and moose, find ample food in the annual shrubs. They move upward into the clear cuts. They are the wolves' primary prey, so the wolves follow them.

Historically, wolves only hunted caribou on the rare occasions when they ran into them. Now that wolves have been lured into higher elevations by other species, they run into them often. Roads for mines, energy exploration and logging, as well as winter snowmobile tracks, lead still more wolves deeper into caribou habitat. The caribou, who have gone to great lengths to avoid predators altogether, and who have not evolved alongside the consistent presence of wolves, make easy prey.

As well, winters are much louder than they used to be. Snowmobiles with high-powered engines and deeply cleated tracks easily travel at 80 kph to quickly cover great distances. Even just a few can dominate large areas of the forest, filling it with their substantial noise and human scent.