In the battle of people vs. pipelines, round one went to the people 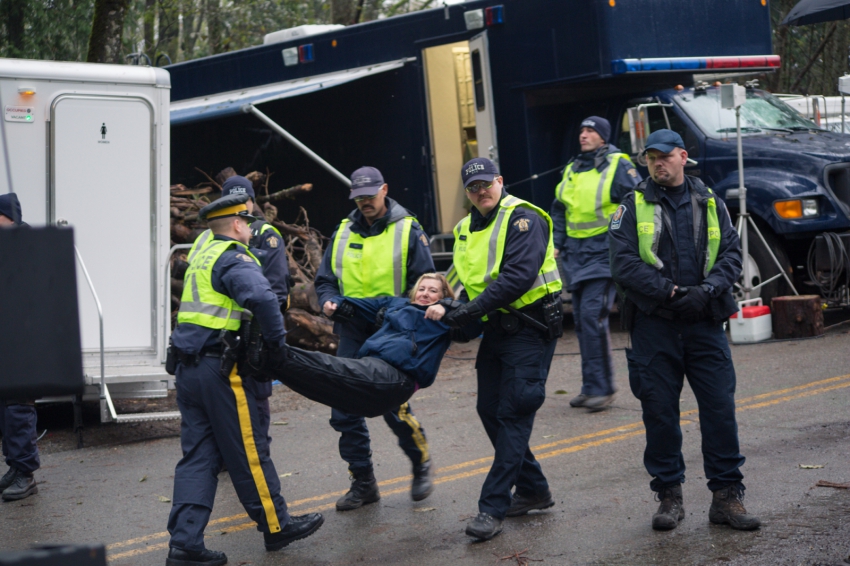 Last Wednesday I was arrested. I crossed a police line intended to mark the area where Kinder Morgan plans to drill into a mountainside as part of the survey work for an expanded Trans Mountain pipeline to carry diluted bitumen from the tar sands to the ocean.

I walked under the bright yellow “police barricade” tape and, very slowly, toward the drilling area. The police stopped me. They spoke directly to me and indicated that if I did not leave I would be taken into custody.  I acknowledged that I understood. They asked me to walk with them and I declined, so three of them carried me to paddy wagon.

At the local jail, they put us into a cell.  Mine was a white cinder block room about 6 feet by 8 feet with a solid grey steel door and a stainless steel toilet with no lid.
The strange, cold, uncomfortable setting made me anxious.

But after a few minutes, a feeling of peace settled over me.  It was odd, but I felt I was in the right place. It took me some time to make sense of these feelings.

To say I am worried about our climate is a significant understatement. I, as many of us, live with an ongoing dis-ease.  A kind of soulful dissonance caused by the disconnect between our everyday lives and the truth we know to be real.

Our planet is heating up and as a result we face food shortages, severe storms, civil unrest.  I believe we can change where we are headed but if don’t do it quickly, our children will see the decline of the world we hold dear.

I sometimes battle with depression.  Therapists have told me that the path to healing is to take action of some kind, small steps.  If you follow the inclination to sit on the couch immobilized, then you sink deeper into despair and paralysis.  Well, I have been metaphorically sitting on the couch around climate change for some years now.  But no more.

Crossing that police line was cathartic.  It was empowering. Invigorating.  Enlivening.  It freed me from my climate induced stress and dissociative haze,  that had me avoiding reality by binge-watching the best that Netflix has to offer and not listening too closely whenever climate science and impacts were being discussed.

But sitting in that jail cell, I felt a weight lift from my shoulders. One that I was only partially aware that I have been carrying for years now.

I am ashamed by Canada’s withdrawal from the Kyoto treaty and our increasingly contemptible position on climate change.

If these are the values of our society then I want to be an outlaw in that society. If Prime Minister Stephen Harper is our model of leadership in this time of global climate crisis, then I want to stand in clear opposition.

But of course I do not stand alone and these are not the values of most Canadians. In fact, I believe I stand with the majority of Canadians, and the polling data agrees.

When Kinder Morgan announced their plans, a group of dedicated people set up camp on the exact location of the proposed drilling.  They lived there for months.  As the company prepared to bring in the drill, the police arrested them all, dismantled their camp, and the drills started.

From that day on, hundreds of people came to the mountain to stand in support of those who defied the court order and walked across that line. Over one hundred people crossed the line: grandmothers, librarians, professors, students, yoga teaches, writers, activists, and First Nations elders.

As I watched them, I wanted to be one of them.

With every fibre of my being, I wanted to join the people on the other side of that line.

So I did it, I crossed the line.  Six members of a choir were arrested that same day.  So we sang in the paddy wagon, songs of protest, folk songs, movement songs.

When we got to the jail, my cell mate was Valerie, a choir member, and a retired professor of French Literature at UBC.  We talked and napped, and ate our Kraft Dinner and Tang together.  After 5 or 6 hours, they released us. We signed a Promise to Appear in court a month later.

The next day, I witnessed Grand Chief Stewart Philip walk across the police line, with a dignity and strength that deeply inspired me and strengthened my resolve.  I’m outraged that the Grand Chief had to be arrested to be heard as a leader of people who must struggle with alienation from their land as well as serious health impacts.

Leukemia, and rare forms of cancer have been increasing significantly in recent years in the communities downstream from the tar sands that are largely Athabasca Chipewyan and Mikisew Cree First Nations.

How much more will our First Nations people tolerate?

But back on Burnaby Mountain, it turned out that Kinder Morgan made a mistake with the GPS coordinates for the injunction and the contempt of court charges were dropped.

We spent the weekend on the mountain, debriefing, learning from each other and celebrating.  We had a huge dinner with many of the people involved and with Sut-Lut , the beautiful and wise Squamish woman who had tended the sacred fire at the heart of the protest, (and who herself had been arrested earlier in the week).

Sut-Lut toasted us all,  young people wearing bandanas over their face, grannies and children and everyone in between: “I love you all so much, my beautiful, colourful family, and I thank you all so much for your peaceful protest.”

Let’s be clear about what really happened on Burnaby Mountain.  This is the first time a shovel has broken ground in Canada in the effort to build one of these new proposed tarsands pipelines.

In the battle of People vs Pipelines, Round 1 went to the People.

See more
Crazy Heart: Thumbs Up or Thumbs Down?
An Education Gets Mixed Reviews