Let's Go to the Yukon! 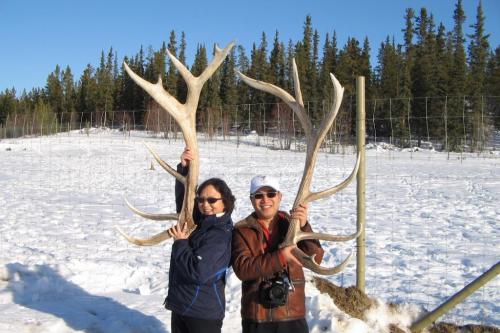 Last Saturday, I made an impromptu trip to Whitehorse. The afternoon before I was in the BC International Media Centre "working", (which means I was updating Facebook with the picture I'd just had taken of me and the Stanley Cup). Linda Solomon, VO editor extraordinaire, was on the phone apologizing that she could no longer visit the Yukon the next day. At issue was a media / tourism day trip to Whitehorse.  She asked if she could send a member of her staff as she looked over at Meghan and Meghan shook her head. Then she looked at me and I said "yes!" before she could even ask the question. I warned her that "I don't know how to write and I don't know how to take a picture, but I'll go", to which she replied "just do your best."

I was informed I'd have to get up rather early the next morning.  That was the only moment of pause, as I had been up late the night before celebrating a hockey victory. But I figured, let's have an adventure. There's plenty of time to sleep when the Olympics are over.

I wanted to see the North again. I spent four months of winter in Yellowknife when I was nineteen years old, working for the Canadian government. It was a good time; generally I found that people had an open perspective on life, and were from all corners of Canada. My boss was of Haitian descent, I had several Newfie (Newfoundlander) coworkers, and my roommate was Canadian Vietnamese who made traditional dishes out of the whitefish that was readily available in town.

Off to the Great Northwest

Whitehorse may not have a lot of landmarks or be considered a major tourism destination, but from the time I got to the airport, I knew I was going to have a good time.

"Welcome, we hope you enjoy your journey.  We're happy to have you," Linda Bierlmeier (see picture below) said while she personally greeted each one of us on the plane. She was wearing a costume from the time of the Klondike Gold Rush, which occurred in the Yukon in the early 1900's. It came off as a little hokey, but friendly and inviting, as if to say they were not going to putting on airs today. We were going to get a real piece of Canada in Whitehorse, Yukon.

We rode into sky on Air North. We were immediately informed that we'd be eating soon, which turned out to be delicious blueberry bread, fresh fruit, yoghurt, and a can of cranberry juice. 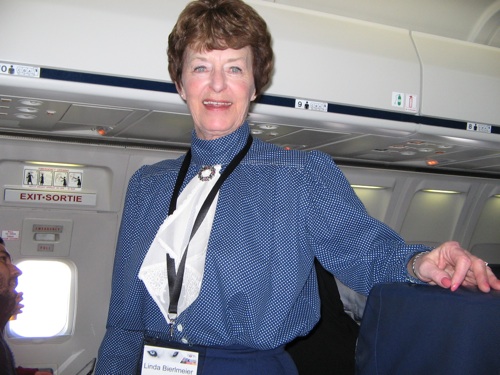 When I was in Yellowknife, there were always Japanese tourists visiting in order to get a peek at the Northern Lights. Denny Kobayashi, of Yukon Economic Development, was one of the organizers of the trip. He said people from Asian countries put importance natural phenomena like the Northern Lights.  "They consider them lucky, a special experience.  So that's why they come to see them," he said. The economic situation has meant that they have seen a lot of the Japanese tourism falling off, but are seeing an increase in Asian tourists from the Lower Mainland. He also said that they're really targeting people in Vancouver, because a lot of mining and resource company executives are located in West Vancouver and so they're trying to build ties with those people. He also described efforts to establish the Yukon Cold Climate Innovation Center, in Whitehorse, to be a world leader in cold climate technology research.

My seatmate on the Air North flight was Tracy Moore, of the Canada Export Centre. We discussed the Chinese communities in Vancouver, as he deals with a lot of businesspeople from China. He was talking about the language barrier and problems it presents in dealing with China. He drew me a diagram of a meeting he had the week before. Half the people in the meeting spoke Chinese, half the people spoke English. One person spoke both languages fluently and then a couple of people had very basic skills in one language and good skills in the other. The Chinese visitors may have understood more than they let on. So when the one guy who knew both had languages had to leave the room for a bit, everyone else was left everyone else sitting around and smiling, trying to communicate with a limited vocabulary and hand gestures. The Canadian businesspeople and the high profile Chinese investors were trying to reach across the table and connect, but it was hard to do, because of the language barrier. I found this an interesting story, indicative of some of the exchanges we see in Vancouver and around the Pacific Rim.