Creating the People's History of 2010: Accredit Yourself and Start Reporting, Partying, and Schmoozing with the World

What do you plan contributing to the future?

Leading up to Vancouver turn to spend, there were a bevy of events to podcast including the Governor-General presenting the Olympic flag from Oslo, the flag tour with Crispin Lipscomb and Duff Gibson, plus reconnaissance of venues in Whistler, Cypress, Richmond and Vancouver.

But the big effort started with rejection from the worldwide press briefing and an open letter to VANOC - which sparked commentary, meetings and ideas. The letter also attracted media of all flavors to the conversation about the roles and regulations in the grey space between "accredited journalists" and "fans with cameras and recorders."

Now the fruits of this conversation are evident with publications and organizations building coverage communities and logistical resources for all sorts of journos - more on these below. 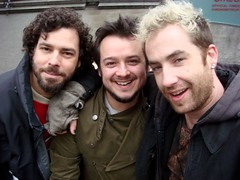 While VANOC was late to the revolution (they have made efforts @2010Tweets – Youtube), London has a head of New Media evangelizing Change, Social Media and London 2012 plus concerned citizens are using social media in a non-confrontational manner to express concerns directly to Jacques Rogge. Dr. Andy Miah of Univ. of Western Scotland will be documenting what he sees here and sharing in the UK after participating in the Social Media and the Olympics Panel at Northern Voice here in Vancouver.

Residents of Sochi will enjoy the benefits of social media for community discourse from early days of their Games as they received a Knight News Challenge of $600,000 to use for:

"... the latest online tools to both discuss and influence the impact of the games. A web site and database will allow the community to track and debate how the plans are changing life there over a five-year period. The idea is to help residents better prepare for the Olympics, to inform the media about the city’s issues and to use discussions about the games as a way to improve life in Sochi." A notable achievement to celebrate by - props to young Fulbright scholar, Alexander Zolotarev - and I hope i can help out!