Italian theorist Giorgio Agamben calls it the "State of Exception," and observes that governments' emergency-power clauses create "a situation in which the emergency becomes the rule, and the very distinction between peace and war (and between foreign and civil war) becomes impossible." The consequences of a permanent perception of war are obvious.

Charkaoui was just one of the victims of post-911 paranoia. The Moroccan-born Canadian citizen was arrested in May 2003, accused of training with militants in Afghanistan. But our government refused to cough up its evidence to the public, instead invoking a new clause allowing them to indefinitely detain terrorism suspects without releasing their reasons for doing so. He moved from years of solitary confinement to draconian house arrest – with aforementioned constant electronic monitoring – to freedom only because the Supreme Court of Canada upheld his Charter rights and declared Canada's security certificates unconstitutional in 2009. He's now suing Canada for $24.5 million for the violation of his rights.

When I met the long-time Montreal resident, he surprisingly did not speak out of sadness or rage or betrayal. It was at a No One Is Illegal-Toronto event in Toronto, on March 20, 2010. Charkaoui spoke in the most matter-of-fact fashion about his years of detention, isolation and undocumented accusations; of course, he was outraged at the injustice done to him. But what struck me was how he could be any person I encountered during my day, or in my reporting: unassuming, calm, articulate, and humble. He could be any of us – though, as a Muslim-Canadian, he has an experience of discrimination that I will never experience.

But the outrage of his detention remains – along with the three other Security Certificate detainees still in Canada: Mahmoud Jaballah, Mohammad Mahjoub, and Mohamed Harkat – who are held under token changes to the regime as a result of Charkaoui's Charter challenge. Despite Canada's failing on human rights in their cases, it is precisely the 1981 Charter of Rights and Freedoms that prevents an even more widescale abuse of rights.

As we reflect, let's not pat ourselves on the back.

With remembering and celebration must also come criticism of the way our government has systematically chipped away at cherished freedoms. Whether it's warrantless internet spying proposed under public safety minister Vic Toews Bill C-30, or Kenney's omnibus refugee law, Bill-31 - which mandates automatic and indefinite detention for refugees deemed "irregular" by Kenney himself - the Charter must become a more central feature of our civic life, and one with real punitive consequences when it is breached. 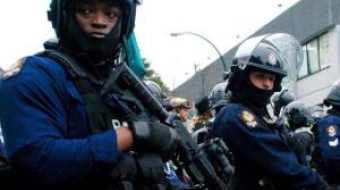