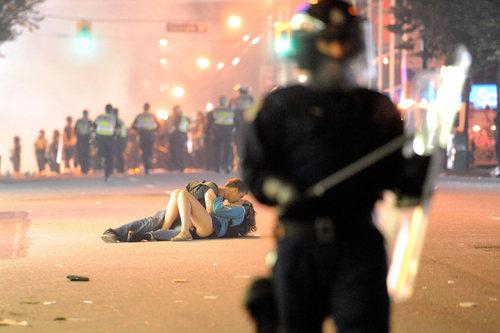 In the aftermath of the Vancouver riots, a photograph of a young couple kissing amongst the chaos of hooligans and riot police received world-wide attention as a result of social media.

The mystery couple in the viral photograph was revealed to be an Australian Scott Jones and his Canadian girlfriend Alex Thomas.

Jones has reportedly been living and working in Canada as a bartender and stand-up comedian for the last six months.

The image was captured on Seymour, between Georgia and Robson, by Vancouver photojournalist Richard Lam.

A man named William, witnessing the event firsthand, reported the context of the photograph to the Vancouver Sun.

"I was on the top floor of a parkade on Seymour, the couple was right outside of the parkade on the street in front of me. What happen was the police line rushed the crowd and this couple trying to stay together couldn't react in time and were run over by two riot police officers. The girl who was knocked over landed head first on the pavement with her boyfriend landed partially on top of her. She was in visible pain, crying, but the two officers gave them a parting shove and moved on.

Bystanders went to go make sure she was okay. I understand that the front line police have to control the crowd but it is a bit ridiculous that they couldn't have other officers or paramedics behind the line to help anyone who is hurt."

Jones’s parents identified the couple and provided confirmation for William’s story. While attempting to leave the Stanley Cup final, Megan Jones reports that the couple became caught between the wave of rioters and the police.

The young man’s mother told told the Globe and Mail that her son tried to comfort his girlfriend, Thomas, with a kiss after she was knocked to the ground by a riot shield.

Jones’s father, Brett Jones, first identified the couple by commenting “this is my son” to a Facebook photograph of the kissing couple. “How’s that for making love not war!” he said.