Yemen Blues will make you move

Yemen Blues returns to Vancouver for the fourth straight year as part of Chutzpah!, Vancouver’s yearly Jewish performing arts extravaganza. With charismatic frontman Ravid Kahalani and a set of elite world musicians, Yemen Blues has wowed audiences around the world as they have come into their own. 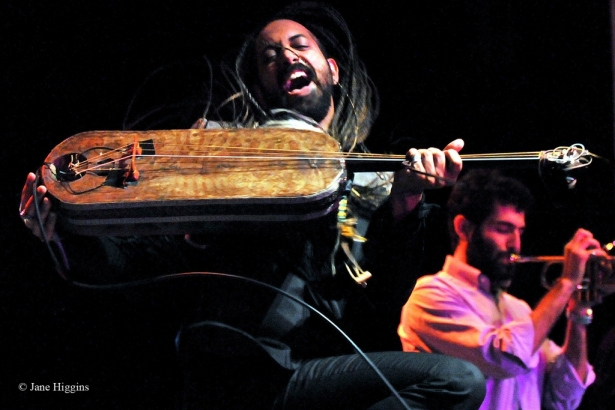 “It doesn’t matter where you’re from, your language is my language.”

These, the words of Yemen Blues lead singer Ravid Kahalani, are perhaps the best summary of the experience I had last night, watching one of the best live bands I’ve ever seen.

When we entered the Venue, the energy inside was palpable. The crowd wanted to move. The chatter was excited, broken up with few smatterings of clapping and cheering for false alarms, as any stage activity attracted attention. I got the impression this crowd knew what was coming. My wife and I did not.

The band entered quietly, with all the dignified confidence of a group of musicians that is really, really good at what it does. We were standing near stage right, directly under bassist and oud player Shanir Blumenkranz’s massive rig. He began a droning improvisation on his Danelectro that was soon coupled with the congas and box of percussionists Itamar Doari and Rony Iwryn, with dynamics, sharp attacks and tension you could set fire to. Jazz trumpet virtuoso Itamar Borochov and trombone maestro Rafi Malkiel warmed up their fingers with blistering runs. Just when we were wondering if they would ever begin, Ravid took the stage like a rock star, dressed to kill, and the night was on.

This dude is passion personified. He likes to dance as much as he loves to sing, and he’s very good at both. A student of traditional opera as well as a fine guembri player, his range is truly spectacular, from ethereal falsetto to guttural groan. His emotion is real, borne of his Israeli and Yemeni heritage. The voices of the instruments and his own voice come together in a frenzied melding of traditional Jewish and Yemeni music, with elements of jazz, soul, funk and West African music. And his moves! I remember thinking this would be what you’d get if you crossed Prince with James Brown and Justin Timberlake. If that makes any sense at all. It was hard to describe but easy to feel. I must iterate – you will not be able to sit still.

And it’s not all crazy uptempo. Wait for the ballad near the end of the ninety-minute show that almost silences the crowd. I remember being caught in a trance, watching Ravid as he explored every singable note in his range, a simple duet with the oud. It transported me thousands of miles and centuries away to a land I’ve never seen. I felt uplifted, spiritual even. My wife confessed it almost lulled her to sleep. Then the reverie was broken with another signature energetic pocket. This happens several times during the show – the use of dynamics and tension.. The louds are intense, the quiets a whisper. The result is an hour and a half that feels like half that.

Every musician gets moments to shine, where you realize each could drive a quality show on his own. They are some of the most gifted performers I’ve seen. And at the end, after the rousing encore, our legs exhausted from dancing, we felt we had seen something unique that stirred something in us I’d never recognized before.

If for no other reason than to experience true world music for perhaps the first time, and to dance like you’ve never danced before, you need to see this band. Feel free to indulge at Café Crepe before the show, because you will burn it off. I’m no world music buff (I mostly listen to country music) but I related to this on a primordial level. I think it’s difficult not to. This music comes from a place we all know deep down. Everywhere I looked, people of all backgrounds, ages and sizes were moving in whatever way felt right to them. It was beautiful.

Catch their last show tonight at the Venue, 881 Granville St. Tickets may be purchased at chutzpahfestival.com or at the door.

Bodytraffic delights as Chutzpah! kicks off in style

Fearless dancers tear up the stage at Chutzpah!